The touching “Spy in the House of Men,” is a one-woman show by performer Penny Sterling about her personal journey toward living her life openly and authentically as a transgender woman. Aside from some brief music transitions and the occasional prop, Sterling herself is the front and center of the hour-long monologue, broken up into the major milestones on her long and winding path toward finding happiness and comfort in her own skin.

Sterling has a captivating stage presence, and her experiences — from identifying the “fundamental wrongness” she felt as a child and young adult to rebuilding her life after a failed marriage and then navigating the delicate process of coming out to her children — are heartfelt, true, and often very funny. 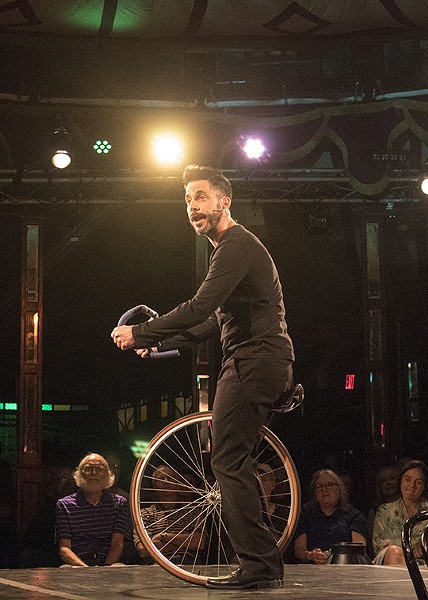 Unfortunately my evening ended on a bum note as I caught “The Bicycle Men,” the last of the Fringe’s Spiegeltent headliners to premiere at the festival. It’s a gleefully raunchy musical farce about Steve (Derek Manson), an American traveling through France when his bicycle breaks. His attempt to repair the bike sends him off on some zany misadventures and bizarre encounters with the locals of a small French village where he’s broken down. Aiming for something in the vein of Monty Python, the show never really coheres into the hilariously absurdist romp it clearly wishes to be.

To be fair, the production suffered from some opening night technical glitches, but that only accounts for so much. The real problem lies in the material. For all the chaotic silliness of a typical Python sketch, there’s a precision to that brand of humor that feels spontaneous and unrehearsed, and is obviously anything but. “The Bicycle Men” never quite nails that delicate balance. The four-man cast — rounded out by John Rubano, Joe Liss, and Bruce Green portraying a rotating cast of characters — is clearly talented, and there are some clever ideas and amusing lines throughout the show, but you always feel the strain.

With musical numbers and jokes about race, culture, and sexuality, the performance is an equal opportunity offender, but dick and poop jokes aren’t enough without bringing something fresh to the table. Comedy is nothing if not subjective, but I couldn’t help noticing several seats around me were conspicuously empty following the show’s 10-minute intermission. It seems I wasn’t alone in feeling that, at least on this occasion, the humor missed the mark.