I started off day three of Fringe by catching a screening of the little-seen documentary, "Muddy Track" at the Dryden Theatre -- the only Fringe event held at that venue this year. Scheduled as part of the Dryden's series on the films of Bernard Shakey (the pseudonym used by musician Neil Young in his little-known career as an independent film director), the screening was retrofitted to fit the Fringe lineup and the film makes a great addition.

Shot largely by Young himself on cheap analogue video using a camera the musician nicknames "Otto," "Muddy Track" documents Young's 1986-87 European tour with the band Crazy Horse, capturing the DIY aesthetic of the film and the tour itself. Presented in snippets and fragments, the film captures the chaotic life of an artist on the road -- from rioting fans to hotel jam sessions -- with ramshackle charm. 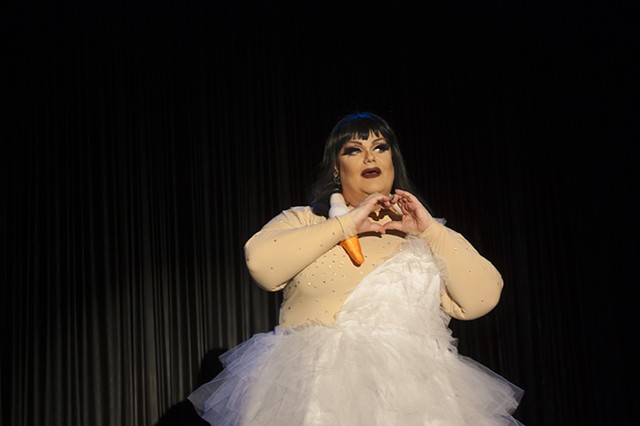 International celebrity housewife Mrs. Kasha Davis took to the TheatreROCS stage for her popular Las Vegas revue-style show alongside Miss Darienne Lake (filling in for Davis's usual co-host Aggy Dune). Mixing bawdy humor, quick costume changes, and plenty of singing -- both live and lip-synced -- they each pulled out the best of their stable of diva impersonations, from Tina Turner to Bjork.

The queens are undeniably good at what they do, and the result is a masterclass in good old fashioned drag entertainment that Sunday night's audience lapped up with a spoon. Just be sure you bring along some cash to show your appreciation in its proper form: tips.