The rainy weather seemed to keep at least a few people from Friday evening's performance of the clever "Grimms' Mad Tales," but hopefully they'll catch the show's second performance, since it's well worth the time. Staged similarly to 2014's "Spoon River Rochester" (and also directed by David Henderson), the show is immersive public theater, or as the Fringe guide calls it, "part flash mob, part performance art." A cast of 120 people -- including, once again, Mayor Lovely Warren -- are arranged down Gibbs Street and throughout the Spiegelgarden, transforming the space into a fairy tale wonderland as the performers, decked out in purple, red, black, and white costuming, deliver monologues inspired by the stories of the Brothers Grimm.

A few of the stories are performed in duos (although there's at least one quartet of young actors for "The Elves and the Shoemaker"), which contributes to the livelier tone the show strikes compared to the more somber "Spoon River." Utilizing a mix of both professional and nonprofessional performers, it's fun to see how each one has interpreted their part, both in delivery and costume. There's so many actors that it's impossible to see every story all in one go, so I'm looking forward to heading down to Gibbs Street on Saturday and doing my best to catch the rest. 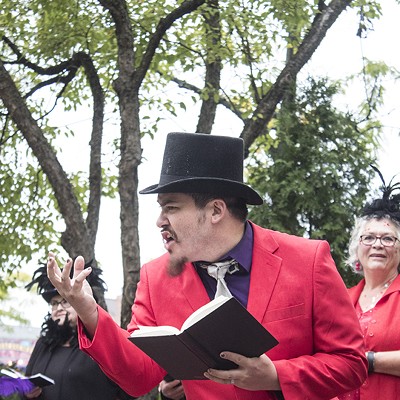 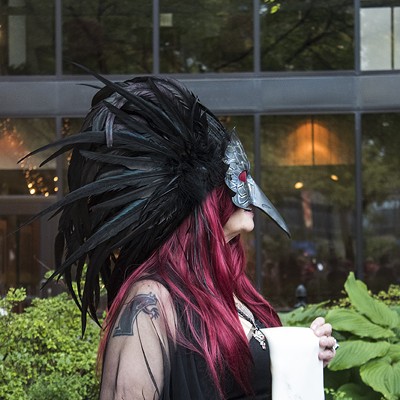 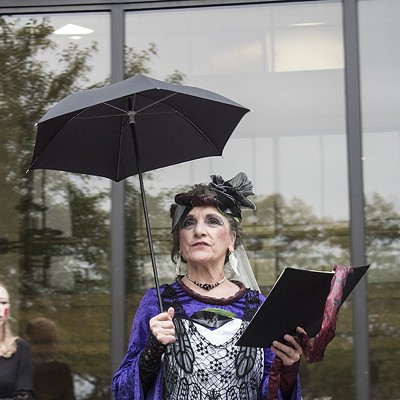 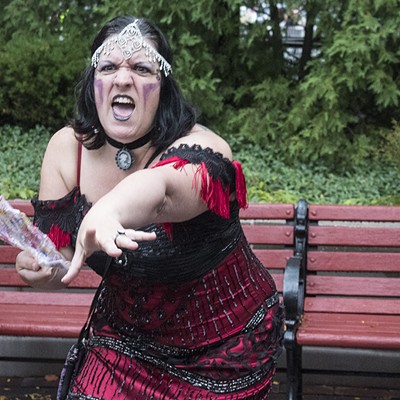 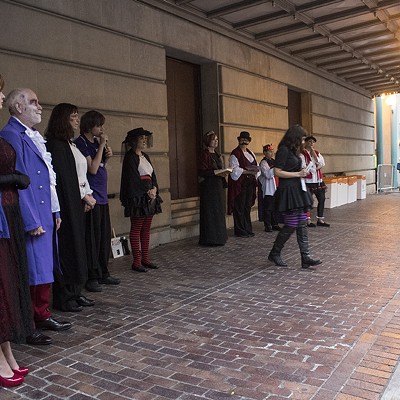 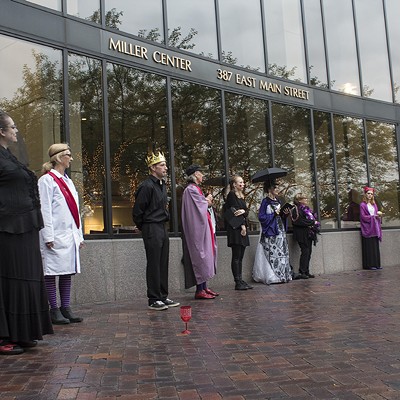 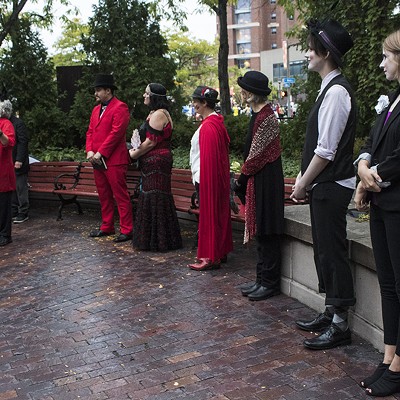 Based on the educational computer game that inspired a generation, the nostalgic "Ruts! The Oregon Trail Experience" is a delightfully silly original play by Deborah DeGeorge Harbin with music, lyrics, and sound by Paul Obarowski. A family of four pioneers suddenly find themselves within the game, making the perilous journey west (seemingly whether they like it or not). Periodically an omniscient voice pipes up, alternately stating the obvious -- noting the weather conditions and cataloging their dwindling supplies -- or spontaneously announcing the various diseases and ailments that have suddenly afflicted various family members (much to their surprise).

While some familiarity with the "Oregon Trail" certainly helps, it's not required, and the youngest members of the audience seemed to get just as much enjoyment as those who had clearly spent their childhoods with the game. With its ear-wormy midi tunes and 8-bit inspired set design, the show is a joy to watch. While the pace could use a bit of tightening, and the performers occasionally stepped on each other's lines, these minor quibbles do nothing to detract from the show's handcrafted charm. Make sure to get there early if you want to grab the hotly demanded hay bale seats up front.

"Ruts! The Oregon Trail Experience" will be performed again on Saturday, September 24, at The Strong National Museum of Play. 6 p.m. $12. All ages.

Unfortunately, I concluded my evening with one of my more disappointing experiences at the Fringe this year at "Pandora Boxx in The Worst Show Ever." Making her return to Rochester after moving to Los Angeles following her success on "RuPaul's Drag Race," the queen delivers an evening of "light singing, supposed comedy, crazy antics, and dick and fart jokes."

"Low-key" is the best way to describe the experience, as Pandora tells meandering stories about life after RuPaul and speak-sings songs about poop. Obviously there's nothing wrong with that, and the material could have worked, but Pandora's delivery felt unpolished, and she repeatedly stumbled over her own lyrics despite having notes in front of her. Pandora has an appealing stage presence, but for a queen working at her level, I expected more.

"Pandora Boxx in The Worst Show Ever" will be performed again on Saturday, September 24, in the Spiegeltent. 9:30 p.m. $25. Mature audiences.

EDITOR'S NOTE: This article has been updated to include the official number of actors that appeared in 'Grimms' Mad Tales.'