September 16, 2017
Before the big Friday on the Fringe show from Plasticiens Volants, I made sure I got to experience “Complimentary Heckling,” which is, well, pretty much exactly what it sounds like. Performance artist Crackerjack is camped out in Parcel 5, megaphone in hand, ready to spread some good vibes to any passerby who looks her way. And the crowd definitely seemed to get a kick out of it. Just listening to her shout out compliments was enough to put a grin on my face: “You look beautiful tonight! Look at that smile! You with the red hair and green shirt, you are gorgeous!”

When I chatted with Crackerjack on Thursday evening, she admitted she was a little concerned about whether she’d be able to come up with fresh compliments for every person, but she seemed to be doing fine last night. With an hour “set,” Crackjack spent some time by the Bubbly Bar, then once the bands grew too loud and started to drown her out, she shifted over to the entrance gate off East Main Street. Swing by, and Crackerjack might give your night a little boost. 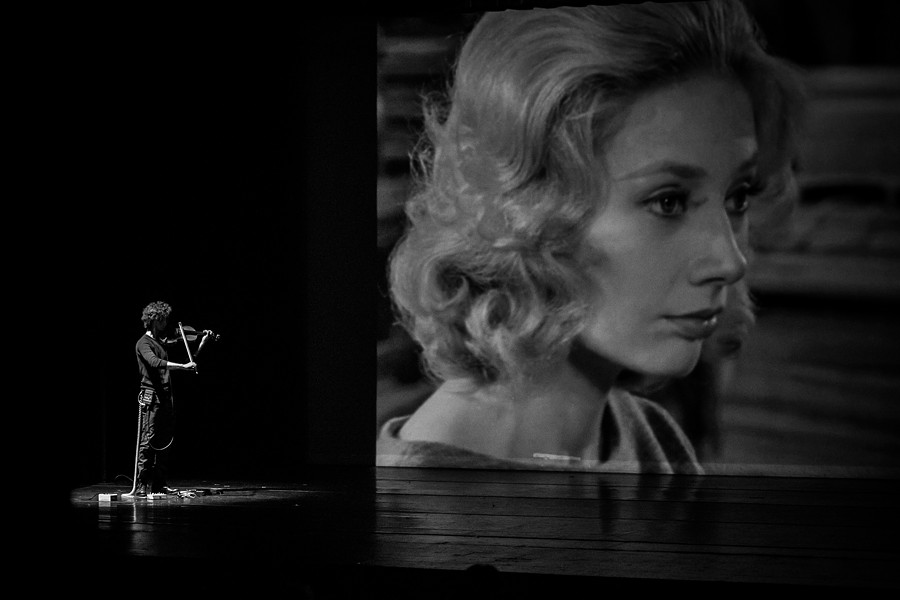 After Plasticiens Volants, I headed to the School of the Arts to catch a showing of Herk Harvey’s 1962 horror cult-classic “Carnival of Souls,” reinterpreted with a streamlined edit and a new score from “accessible avant-garde” musician Adam Sterr.

The film’s plot follows a young woman who, after living through a car accident, begins to experience some unexplainable occurrences: She sees sinister figures, and feels herself drawn to a mysterious, abandoned amusement park. David Lynch and the late George Romero both claimed the film as heavily influencing their filmmaking careers, which should clue you into the film’s general vibe.

Using a bit of his own previously recorded music, Sterr’s new soundtrack trades in the film’s gothic, organ-heavy score for solo violin (embellished with some electronic assistance and live looping). The result makes for a viewing experience that’s a bit more somber and ethereal.

Shaved down to just under an hour, this streamlined cut of the film sacrifices a bit of the original’s creepy mood, but by trimming out some of the plot’s connective details, the whole feels dreamier and even stranger. It’s a fascinating new look at an old classic, and Sterr’s work helped end my Fringe evening with a shivery delight.

“Carnival of Souls” will be performed again Sunday, September 17, at SOTA: Allen Main Stage. 7 p.m. $10. Appropriate for ages 13 and older.