September 20, 2019
Before entering the gymnasium venue of “Brave Space” at the School of the Arts, the audience is instructed to watch a short introductory video to let us know what to expect from the show we’re about to see. We’re told to prepare to get cozy with one another, and that audience members may be asked to assist the performers at certain points throughout the act.

That closeness and intimacy between the artists and the audience is what the show is all about: creating a unique experience that’s unlike any other I’ve experienced at Rochester Fringe. It’s one that I overheard several members of Thursday night’s 7 p.m. audience aptly describe as “magical.”

A production of Aloft Circus Arts, “Brave Space” features an all-female troupe of acrobats in a performance that combines remarkable acrobatics and dance with those parachute fabric games everyone loved in elementary school gym classes.

Throughout the early acts, a giant fabric tent is constructed which soon envelops both performers and audience. Inside we watch — sometimes standing or sitting on the floor, other times laying down — their astonishing feats of balance, strength, and coordination.

Unlike most other circus shows, the audience is near enough (often mere inches away) to observe the silent communication and mutual trust between the performers. And we’re close enough to the action that we’re required to put our trust in them as well — especially when aerialists start dangling precariously above our heads.

The immersion transforms the experience into something wholly wondrous, unexpectedly emotional, and just really fucking cool. 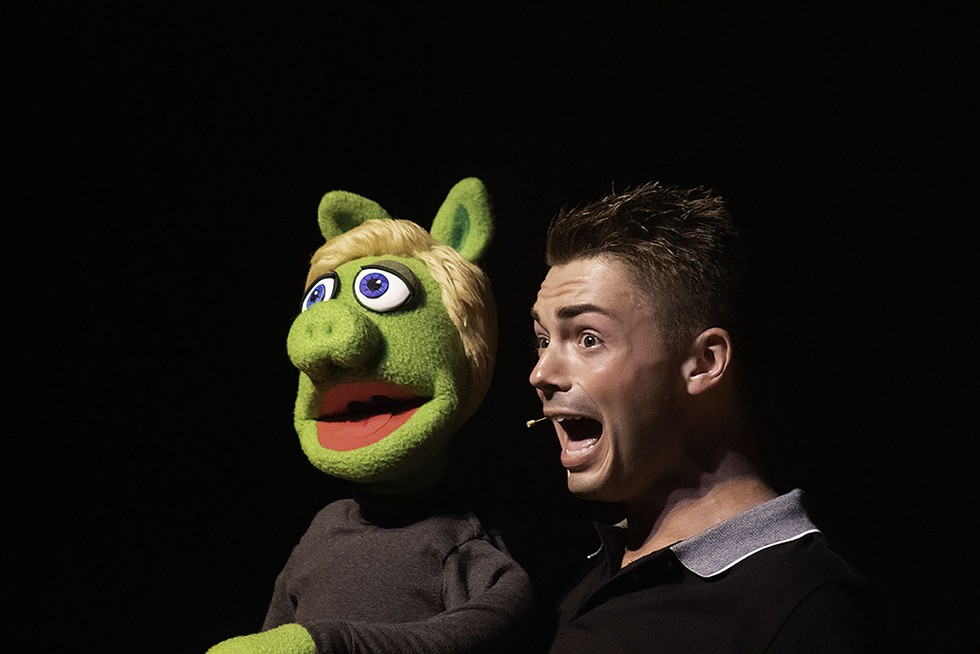 A cabaret-style musical revue from Orlando performer Joel Swanson, the irreverent “Frogpig”
follows the titular misfit puppet whose famous parents abandoned him in a Subway (the sandwich shop, not the transportation system). Though his absent parents are never named specifically, it’s pretty obvious who they’re meant to be (his father’s a frog, his mother a pig).

With a nod toward some famous musical divas, from Minnelli to Streisand, Frogpig leads us on a journey through his tragedy-filled life as he embarks on a quest for stardom and struggles toward self-acceptance.

“Frogpig” will be performed again on Friday, September 20, 9 p.m. in the School of the Arts: Ensemble Theatre. $12. Appropriate for ages 13 and over.