Climate change: How to frame the discussion 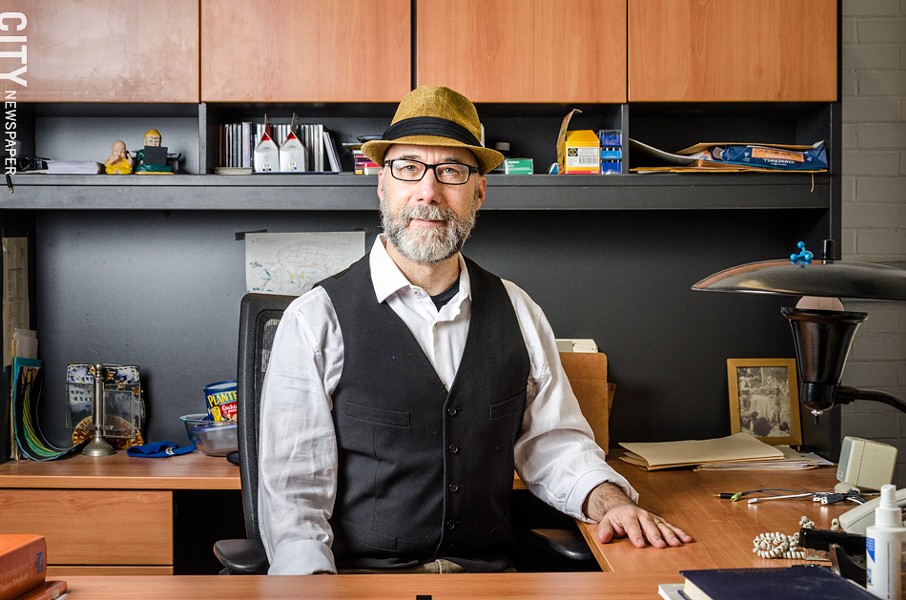 PHOTO BY MARK CHAMBERLIN UR astrophysicist Adam Frank: climate change was an “oops,” but now we’ve got to do something about it.

But the science is often disconnected from public opinion. Facts are distorted or cherry-picked, and people on both sides of the discussion feel like they're under personal attack.

The unproductive national conversation on climate change starts with how the issue is discussed by average people, the media, and governments. Adam Frank, an astrophysics professor at the University of Rochester and co-founder of NPR's 13.7: Cosmos and Culture blog, discusses the dynamic in some of his recent posts.

"Our inability to even get past 'yes, it's happening' stems from the stories we've been telling about how climate change happened as well as what [it] means about us and for us in terms of the human future," Frank wrote in a post titled Climate Change is not Our Fault.

Some environmentalists tend to frame climate change as an issue of corporate greed or by implying that human progress and business are the problem. Some conservatives are turned off by that rhetoric, Frank says.

And for their part, many Republicans and conservatives embrace climate deniers and try to thwart domestic climate-friendly policies.

The unproductive national discussion often ignores the simple fact that climate change is not negotiable, Frank says, and that assigning blame doesn't lead to solutions.

"We're going to need everybody to figure out how to make this transition of infrastructures, how to do it in a sensible economic way, and how to do it pretty damn fast," he says.

One way to get more people and politicians on board is to change how we frame and discuss climate change, he says. The following is an edited version of a conversation that City had with Frank on this issue.

CITY: How do we discuss climate change to convince more people of the need for action?

Frank: First of all, you look at young people. What I see from them, especially the kids who are interested in science, there's enormous enthusiasm for problem solving. And this is essentially a problem.

For me, setting this problem into the evolution of the human species, that's the way we should be looking at it. Not just "the Republicans say this and the Democrats say that." This is a much deeper, broader, and actually more powerful problem, which is that we are a species that is coming to maturity on the planet.

We've become so powerful as a species that we've changed the entire chemistry of the atmosphere. On one level, that's pretty badass, right? And now we've just got to figure out how to continue the project of civilization in a way that works with the laws of physics and chemistry of planets, rather than against them.

So it's a matter of framing: humans have made awesome progress, caused some problems they didn't intend to, and can fix them because they're that amazing?

Exactly. People get into this thing, "Oh, we're destroying the planet!" That is bullshit. The planet is going to be fine. There have been times when the earth has been a giant snowball — like, literally, the entire planet has been glaciated — and there have been times that the entire planet has been a sultry jungle. At some point they found evidence for alligators in the North Pole.

In general, we need to maintain the conditions on the planet that are amenable to nine billion people trying to eat food.

You raise the idea that climate change isn't anyone's fault, but it will be our collective fault if we fail to address it. Would you explain that thought?

Fossil fuels are awesome. They can do amazing things and we did amazing things with them. And of course there was greed involved with the companies. With business, there's always greed. But we didn't adopt the fossil fuel infrastructure because somebody forced us to. People like having their houses warm. It's great that you can get in these vehicles and drive 300 miles in a day.

We've created a society that has really allowed more people, a larger percentage of people than ever before in history, to live healthy, productive, long lives. We need to understand — and that's part of changing this debate — that climate change was an unintended consequence of building this kind of infrastructure.

We couldn't have understood that climate change is coming in 1890 as we were building. But now we do understand. We've matured as a species through our science. When a species gets to this point and starts feeding back on its planet, it either is able to see what it's doing and make the right choices and then evolve on to the next set of challenges and become sustainable for another 10,000 years, or it dies. The earth has had many species on it, right?

It would be our failure as a species to see what's going on but not have the organizational capacity to act on it. I hate to say it, we'd be cosmic losers. We'd become one of those species that couldn't handle it.

If even Pope Francis can't get people to come together on climate change, what do we do?

It is difficult to make a dent. Our country is kind of singular in how effective the denialists have been. There's parts of the world where there already is a lot of action on it. I think the pope did make a dent. I think the debate is slowly swinging. If you look at the polls, there's more and more recognition of it. It's also inevitable because the climate is changing.

Bill Nye was on University of Rochester campus about a month ago. There were like 2,000 students there. And they were wild. It was an army of science and engineering students who were just mad for this guy. And he talked all about climate change, all about changes to the world, and these kids were pumped up and ready to go.

We have to understand that there is hope. We can definitely deal with this. And not only that, but by dealing with it, it will transform us. It'll transform us into the next thing that humanity's going to become, which is a true planetary species.