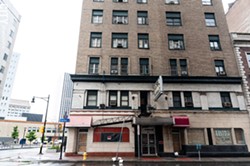 Activists concerned about the lack of quality, affordable housing will hold a rally and march in downtown Rochester on Thursday to call attention to the area's housing needs and to push for state legislation to address those needs.

The rally, organized by the Rochester Housing Coalition, will be from 1:15 to 2 p.m, , starting at the Liberty Pole and ending at the Hotel Cadillac. Participants will include Coalition members – the City-Wide Tenant Union of Rochester, the Rochester Homeless Union, VOCAL-NY, and Citizen Action of New York – and other advocates for tenants and homeless people.

Nearly 90,000 people are homeless in New York State,  rally leaders  say, and Rochester has seen a 19 percent increase in homelessness in the past year. Sixty-two percent of Rochester residents pay more than 30 percent of their income for housing. The federal Department of Housing and Urban Development considers those people "cost burdened," spending so much on housing that they struggle to pay for other essential needs.

Housing activists throughout New York have been pushing for state action, including legislation that would expand tenants'rights and that would allow Upstate cities to enact rent control laws. Thursday's rally kicks off what local activists are calling Tenant Spring, 10 weeks of action and events to help build support for housing law reforms. The coalition will hold a Town Hall on housing issues on April 24 at Wilson Foundation Academy on Genesee Street.