July 09, 2020
In the early morning hours of July 5, Rochester police responded to a house near Pennsylvania Avenue and Sixth Street for a report of a 16-year-old boy who had been shot.

Police and neighbors agree on that much, but they offer differing accounts of what happened next.

According to the Rochester Police Department, the story goes likes this:

As officers tried to aid the victim and investigate the shooting, a group of roughly 25 people approached them and began yelling and swearing. An officer was wounded when he was grabbed by two people and another officer was punched by someone. A third officer was injured, too, as he tried to help. 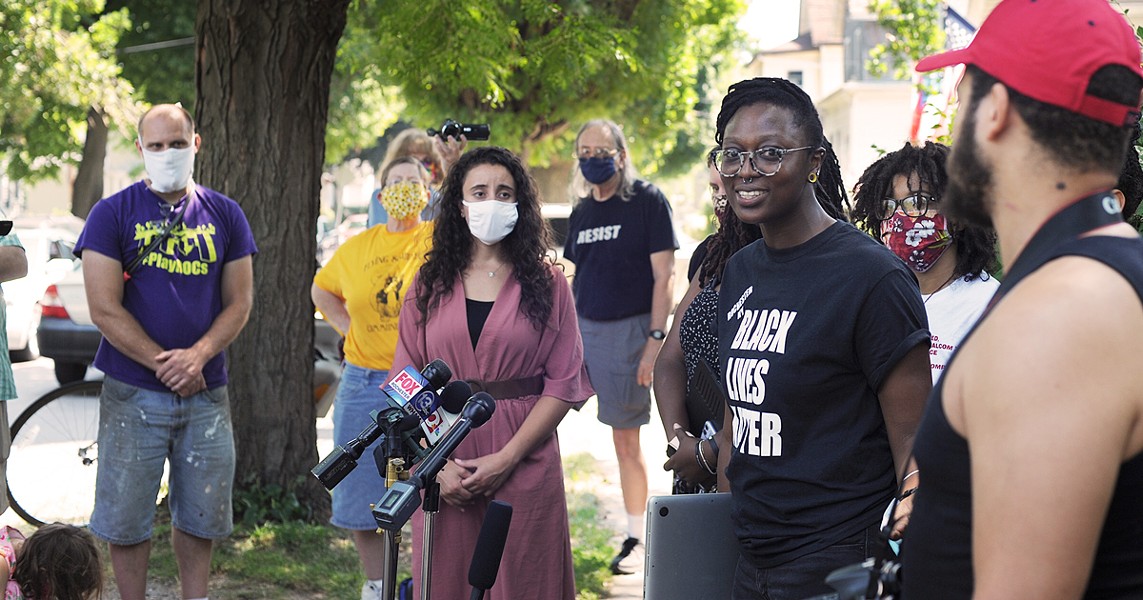 Four people in the group were arrested on charges of obstructing governmental administration. Three of them were also charged with resisting arrest and one of them faces a low-level felony assault charge.

But witnesses Thursday challenged the account, which the RPD had provided to the media.

Stanley Martin, an organizer with Free the People Roc who was part of the group that approached the police, called the police’s version “demonstrably false.”

Speaking to reporters outside the Pennsylvania Avenue house where the incident took place, she said no one in the group, whom she identified as activists, struck a police officer. Another eyewitness, Lakaya Leys, who lives down the street, also said she never saw anyone strike an officer.

Martin said she and the activists, whom she described as members of Rochester Street Medic collective and Roc Food Not Bombs, were hanging out in the backyard of a different house on the same block of Pennsylvania Avenue after Free the People Roc’s rally on July 4. Around 2 a.m., she said, the group heard sirens and saw police cars and walked out to investigate.

“Shortly after arriving on the scene, police officers violently detained and handcuffed the two Black people who called for medical assistance on behalf of a 16-year-old child who had ridden his bike to Pennsylvania Avenue after enduring a gun wound in a different part of the city,” Martin read from a statement.

Several neighbors, including the activists, then began recording the incident and demanding that the people police had detained, a man and a woman, be freed immediately, she said.

Free the People Roc released a four-minute video clip of the man’s arrest, starting from the point where police handcuffed him as he yelled that he had been trying to get the victim help.

Members of the group can be heard shouting at officers to release the man and woman and to explain why the pair were being cuffed and led to police cars. Officers yelled several times at the group to get back, which it generally did.

“We’re at a shooting scene, you’re in the middle of it, you’ve got to back up,” one officer said calmly.

Moments later, another officer commanded the group to move back, yelling that someone had been shot in the face and that officers were investigating.

Leys recalled that officers announced several times that they were looking for a shooter.

“They had no reason to escalate anything,” Leys said.

The man and the woman who had been detained were not charged.

The video ended with footage of officers unfurling crime scene tape and instructing the group of people to move back, which they did, retreating to the house on a gated property from which they had emerged.

One woman standing outside the gate told officers it was her house and that she was making sure her friends were in before she was in, Martin said.

As she said that, Martin recalled, a sergeant, “grabs her and slams her into the ground while she is literally on the front and we’re all behind the gate trying to move back.”

Within a moment police had “swarmed,” grabbed, and arrested four people who were on the edges of the group, Martin added.

Martin said Free the People Roc demands that the charges be dropped against the four people arrested, but was most concerned for the person facing the assault charge.

“We do believe it was retaliatory because we were demanding justice, screaming, ‘Release our neighbors, let them go, why are they being detained,’ all from behind the fence,” Martin said. “And they just weren’t OK with that.”