By Gino Fanelli and Jeremy Moule

PHOTO BY GINO FANELLI Niya Shabazz of the Community Justice Initiative.
A group of activists is calling for the passage of a city law which would prohibit police officers from handcuffing minors. The call follows an incident in Rochester last Friday where police officers handcuffed and pepper sprayed a 9-year-old girl.

The Community Justice Initiative detailed its proposal, which it calls “Nailah's Law” during a news conference Tuesday. The law is named after Nailah Bey, who was 10 when Rochester police handcuffed her during a traffic stop last year. The Rochester Police Department said the officers cuffed Bey to protect her safety, while activists argue the act was an abuse of power.

“No child should be placed under handcuffs,” said Niya Shabazz, an organizer with the Community Justice Initiative. “I don’t care what the situation was.” 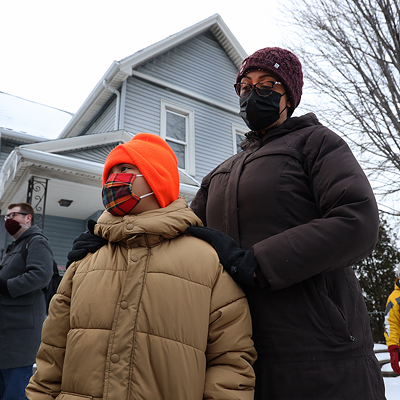 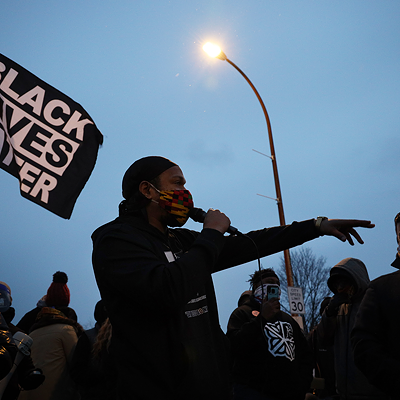 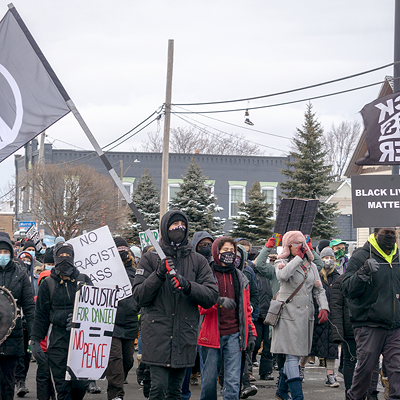 Black Lives Matter protest and march February 1, 2021
Click to View 6 slides
The Community Justice Initiative previously called for Nailah’s Law during a protest it organized Monday. Organizers explained the proposal in fuller detail Tuesday. The law would prohibit police officers from handcuffing children in their custody, according to the group. The speakers did not specify the age cutoff for legislation.

The law intends to also prevent child trauma when a parent is arrested. It would require officers to contact either a parent of the child in custody or a caregiver or social service organization designated by the parent, any of which could remove the child from police custody, the speakers explained Tuesday. Under the proposal, the city and county would also be tasked with keeping a list of service providers parents can select from.

On Friday, police responded to Avenue B near Harris Street for a call of "family trouble” involving a possible stolen car. According to police, as officers investigated, one of them was approached by the mother of the 9-year old who said the child had threatened to harm herself and others.

Officers took the child into custody, but the girl became agitated when she saw her mother, according to police and the video footage. Portions of video footage taken from two cameras worn by police who responded show the child handcuffed and screaming for her father while officers try to restrain her and put her inside a police vehicle. When she wouldn’t follow multiple commands to place her feet in the car, an officer used pepper spray on the girl.

The girl was treated at the hospital and released back to her family. The city has since suspended one officer and placed two others on administrative duty. It has not identified the officers.

On Tuesday, the girl’s mother filed a notice of claim, which is a precursor to a lawsuit, against the city.

In a statement, city spokesperson Justin Roj said that Mayor Lovely Warren was “outraged by what occurred on Friday, and remains concerned that the child involved and her family get the support they need.” He noted that the mayor has directed city resources to assist them.

Friday’s incident drew broad condemnation from Rochester and state elected officials. On Monday, Assemblyman Demond Meeks and state Sen. Samra Brouk, both of whom are Democrats from Rochester, introduced legislation which would ban the use of “chemical irritants” such as pepper spray and tear gas on minors.

Meeks has also called for the officers involved in the Friday incident to be fired.

“I immediately called for their termination,” Meeks said, at a protest on North Clinton Avenue Monday evening. “People said to me, ‘Demond, you can’t be calling for officers to be fired,’ and I said, ‘Why not?’”

No member of City Council has introduced Nailah’s Law as of yet. When asked about a potential timeline of when the bill could be introduced, organizer Diallo Payne said it’s overdue.

“ASAP, that’s the best answer I can give you,” Payne said. “Yesterday, two yesterdays ago.”