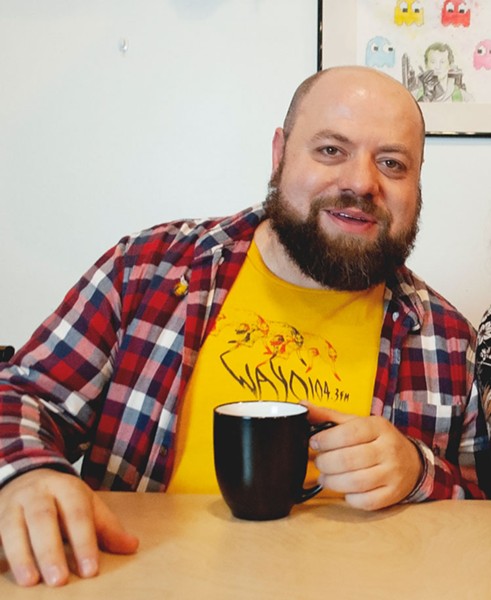 At more than 3,200 words, the statement, which Battaglia posted on his website at woodybattaglia.com, read in parts like a mea culpa, an attempt at atonement, and a defense.

Battaglia, whose ubiquity in the comedy scene included booking shows, teaching stand-up classes, and producing and hosting open mics, podcasts, and radio programs, acknowledged having inappropriate conversations with women and soliciting and receiving compromising photos from at least one female comedian whom he had booked.

“I'm sorry to the community I loved and was a part of,” Battaglia wrote. "I had inappropriate conversations with women in the Rochester comedy community. I thought that I was being careful, but I was in a leadership position and that adds complexity.”

“I was wrong to do this from the beginning,” he added later, speaking of the photos. “Even though I felt it was consensual at the time, these lines are blurred by the lopsided power dynamic inherent in our relationship as comedy booker and comedian.”

The allegations against Battaglia roiled the local comedy community and prompted a swift and thorough backlash almost overnight, with multiple female and male collaborators publicly shunning him online and in interviews.

Making the accusations all the more stunning, and the immediate fallout from them noteworthy, was that Battaglia had positioned himself as a champion of safe spaces for female comedians and comics from marginalized groups.

The allegations were posted anonymously online late last month on the microblogging site Tumblr and accused Battaglia, whose real name is Ron Wood, of abusing his authority in the comedy scene and engaging in “obvious patterns of predation.”

Only one accuser, Emily Champion, a musician who tended bar at an open mic Battaglia hosted, identified herself. She shared a screenshot of a private conversation in which Battaglia made a comment about needing to see her breasts.

In a phone interview following Battaglia’s statement, Champion said she was not surprised. “I expected this 100 percent, because it’s patterns of men being accused of abuse,” she said. “This is not something they want for their reputation.”

Battaglia pledged in the statement to make amends but continued to deny allegations that he sexually assaulted women, as he had in an interview with CITY for a report three weeks ago.

He also walked back a suggestion he made to CITY at the time that the allegations stemmed from his quitting his role as producer of a podcast. Battaglia had said that concerns voiced over the perceived unprofessionalism with which he left that job snowballed into the accusations. “I do not hold the hosts (of the podcast) responsible for what has happened,” he wrote. “I am responsible for my own fate.”

Rochester comedy scene rocked by sexual abuse allegations
Woody Battaglia, a prominent fixture on the local comedy scene, denies allegations that he sexually harassed and abused women, but the backlash against him has been swift and severe.
By Daniel J. Kushner
News
Battaglia wrote that the CITY reporter inquired as to why, if the barrage of allegations against him were untrue, as Battaglia had insisted, they would surface.

“(M)y best guess was that I had been called out online a few days previous and maybe that had stirred anyone who already had some ill will against me,” he wrote. “I do not know that to be true.”

The accusers called for Battaglia’s removal from leadership positions in the scene and that he reconcile with his alleged victims.

In his apology, Battaglia cataloged an extensive list of jobs he said he held in comedy circles that he no longer has. He wrote that he has no comedy or public appearances booked.