The sum of many parts 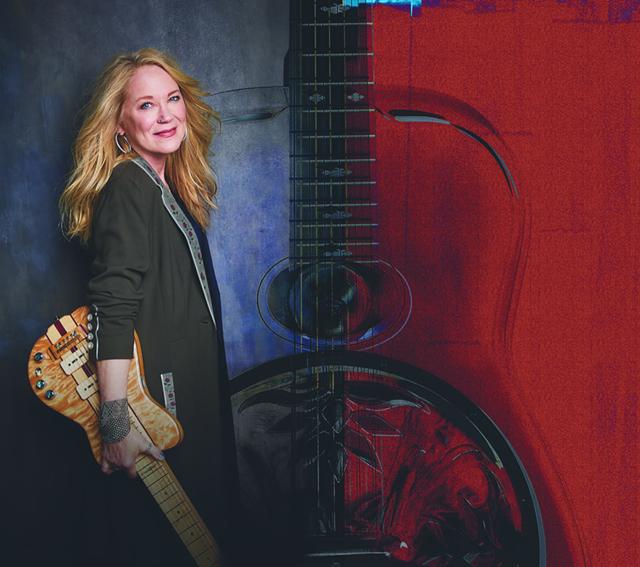 Cindy Cashdollar did not use the past year of pandemic retreat as an opportunity to reinvent some aspect of her life. “I did not sit down and learn Japanese flute, or learn Indian raga scales or do anything like that,” she says. “I didn’t learn how to quilt, I didn’t learn how to become a photographer.”

What she did do was finally, after all these years, get into the cardboard boxes of history she’d been squirreling away: posters of shows she’s played, photographs of the musicians she’s played with.

The older stuff would include Cashdollar playing steel guitar and dobro with Paul Butterfield. And shows with Levon Helm and Rick Danko of The Band, when she was growing up in Woodstock. Then souvenirs of her move to Austin, Texas, and working with Leon Redbone, Ryan Adams, and Van Morrison. There were a couple of appearances on “A Prairie Home Companion.”

Sooooo many people. Bob Dylan. She played on his “Time Out of Mind” album.

But now it is time for Cashdollar to set aside organizing her story, and working with other musicians through what she calls “the Zoom Culture.” The coronavirus pandemic’s grip on live entertainment seems to be loosening. Cashdollar’s first tour in more than a year arrives at Abilene Bar & Lounge on Saturday, June 26 for an 8 p.m. show. She’ll be accompanied by guitarist Johnny Nicholas and fiddler and singer Katie Shore. As the old posters attest, all three have played with the Western swing band Asleep at the Wheel at one time or another. “It’s kind of like a mini-Wheel tour,” Cashdollar says.

Everywhere Cashdollar turns, there’s someone she’s been associated with musically. Carolyn Wonderland has a sold-out show the next day, Sunday, at Abilene. It’s that kind of weekend here. Cashdollar and Wonderland have played together as well.

“It’s the sum of their parts that makes them remarkable,” Cashdollar says of her numerous musical co-conspirators. “But so different from the others.”

Dylan, of course, stands out. “What he does with a sentence just kills me,” she says. “Just one simple sentence, his take on one simple thing is his and his alone, I think.

“I really loved working with him in the studio, for his ‘Time Out of Mind’ project. It was really refreshing and interesting to see his process of trying a song in many different keys to see which — it seemed like he could sing in most of them — but just to see which key served the song best.”

Dylan got everyone involved in the process of creating the song, says Cashdollar.

This new tour is where the logistics of getting everyone and everything into one vehicle must be carefully considered. So for the comfort of her touring partners, Cashdollar must control herself. She’ll be bringing an eight-string single-neck steel guitar. A metal-bodied tricone guitar. A lap steel guitar. And what’s commonly called a dobro, although Cashdollar points out that Dobro is a brand name, and the instrument is correctly called a resonator guitar.

An in-demand musician who has frequently contributed to Grammy-winning albums, Cashdollar says her solo material sometimes takes a back seat. “It’s really hard to find time to sit down and figure out your own stuff,” she says. She compares her personal output to a 17-year cicada. Her debut album, “Slide Show,” was released in 2003. Now she finally has her second album, “Waltz for Abilene.”

Cashdollar sees it as a luxury to be able to take her time with her own projects. And with “Waltz for Abilene,” it was payback time. The album comes with an insane list of musicians. She tells of flying to Louisiana to record with Sonny Landreth, then jetting to California the next day for a session with Albert Lee.

Each song on “Waltz for Abilene” features a name, or names, from the catalog of Americana greats: Marcia Ball, Rory Block, Larry Campbell, John Sebastian, Levon’s daughter Amy Helm, and Asleep at the Wheel’s Ray Benson.

The music is similarly wide-ranging. Cashdollar wrote two of the songs — the gospel-sounding “Salvation” and the title track. It’s only one synchronicity that “Waltz For Abilene” will be heard at Abilene Bar & Lounge on Saturday night.

There are, in fact, multiple synchronicities. The bar is named for a song by Dave Alvin; Cashdollar has played in bands with Alvin. My dog is named Abilene, also after the song, but Cashdollar is probably unaware of that. She says she wrote “Waltz For Abilene” simply because the word “Abilene” is so beautiful.

There’s history in this album. The opening song, “Foggy Mt. Rock,” was co-written by Josh Graves. “He was a guy who kind of put the blues in bluegrass,” Cashdollar says. Hoagy Carmichael and James Mercer wrote “Skylark.” And there are some traditionals.

“Sey Seychelles” sounds like an old Cajun waltz, “It’s old, nobody knows where it came from,” Cashdollar says. “I slowed it waaaaay down, because I thought the melody was so beautiful.”

Beauty is the throughline of “Waltz for Abilene.” The standard is this: “If there’s something about a song that really moves my heart in a certain way,” Cashdollar says, “and it brings me joy to actually physically play the song.”

Working this vein of music, Cashdollar knows the Rochester sacred steel stars, The Campbell Brothers. “I hung out with them, jammed with them, just an amazing time,” she says. “Such a sweet man,” she says of Darick Campbell in particular. “Darick was supposed to be on this album.”

But he passed away last year. “You talk and you talk about doing something,” she says. “And you don’t do it, that’s what happens. Perfect example.”

It can all end so quickly. Perhaps for Cashdollar as well. She was in a serious car accident in 2017.

“Everybody thinks I fell asleep late at night,” she says. “I had so many nasty posts on Facebook. ‘Why didn’t you pull over, you could have killed someone.’ ‘You shouldn’t drive at night.’”

They didn’t know that the accident happened at 1:30 in the afternoon. After a three-week tour, and the last-minute arrangements for her wedding a month earlier. Cashdollar was thinking about how much fun the last few weeks had been, and how tired she was.

“I was driving home from an appointment on a two-lane road and I still don’t know to this day if my tire blew out or I fell asleep,” she says.

Asleep at the Wheel is a great band, but not a great driving strategy.

“I crossed over the incoming lane and I was very lucky there was no traffic coming, I guess it’s a super-busy road,” Cashdollar says. “And I think I hit a guardrail, and kind of traveled along for a while and slipped over the guardrail and landed back on the road, facing in a different direction.

“So I was very lucky that all I got was a compression fracture and tore my shoulder up a little bit. Really lucky, because the car was completely totaled.”

The accident took a big chunk of time out of recording “Waltz for Abilene.” Cashdollar wonders: Perhaps this was a sign to slow down?

“There’s always that one time,” she says, “when you fall asleep at 1:30 in the afternoon.”