Abortion conflict flares up in Batavia

But one of the fiercest conflicts has been over a woman’s right to safe, legal abortion. And right now, it’s flaring up in the City of Batavia, where officials are deliberating a resident’s request that they send a letter to Governor Andrew Cuomo opposing new state laws around abortion.

State lawmakers passed the Reproductive Health Act on January 22. The bill modernized New York’s abortion laws and brought them in line with protections spelled out in the Supreme Court’s 1973 Roe v. Wade decision. And it incensed abortion opponents across the state and country, including Batavia resident Chris Connelly.

He appeared at a Batavia City Council meeting a week after the Reproductive Health Act became law and asked the Council members to “shut down Planned Parenthood” and “make Batavia a sanctuary city for the unborn,” according to a January 29 Batavia Daily News article. (Connelly didn’t respond to an e-mail from CITY seeking comment.) 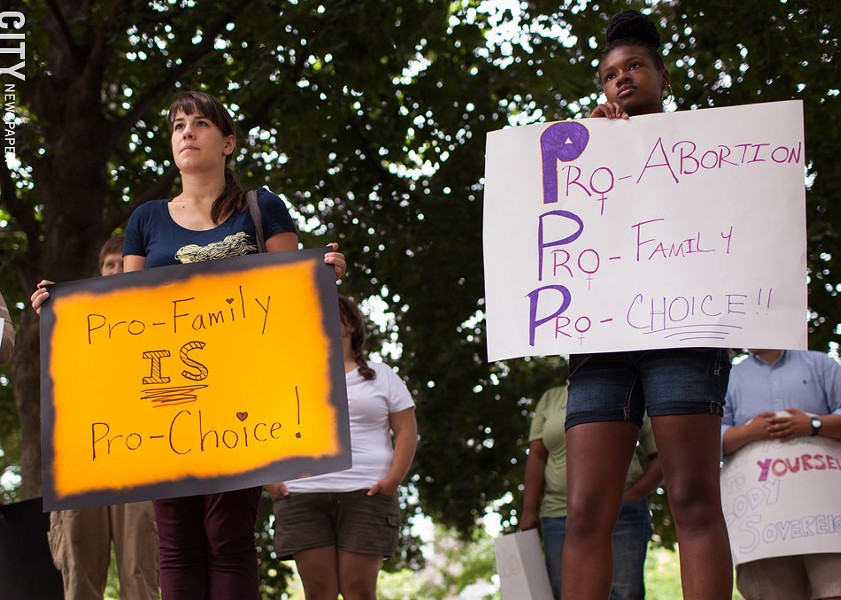 His remarks found support from at least one Council member, Rose Mary Christian, and sparked debate among all of them. But ultimately, at the suggestion of Council President Eugene Jankowski, the members opted to have the city manager put together a draft letter of opposition to the governor, which they could then discuss at their next meeting of February 11. Municipal governments frequently send letters to state officials on matters of concern, typically policy and funding issues that directly impact government operations.

“I thought that process would also give us time to get public feedback,” Jankowski said during an interview last week.

The public responded. Council members received a slew of e-mails, many of which urged Council to stay out of the issue, Jankowski said. And at last Monday’s Council meeting, approximately 150 people packed the chambers, 18 of whom spoke not just about the letter, but about their feelings on abortion as a whole.

Quite a few of the speakers came from outside of Batavia, as a video posted on The Batavian (thebatavian.com) shows. A pastor from Syracuse urged Council to make Batavia a “sanctuary city for the unborn,” and a woman from Mt. Morris stressed that reproductive rights are “decided law.”

“You are at a pivotal point in American history because you here in Batavia, New York, could send that letter to Governor Cuomo and state that you cannot possibly go along with not only this new legislation, but you cannot go along with the procedure known as abortion,” Devlin said.

Another segment showed remarks from Nikki Calhoun of LeRoy, a reproductive rights supporter.

“We have shown time and again that we are not someone’s property, we are not fragile, we are not stupid, we are not weak,” Calhoun said. “Members of this Council, I implore you to mind the business of the city and not our bodies.”

Ultimately, the board couldn’t come to agreement about the letter. Jankowski isn’t sold on the idea of sending the letter – nor are some other members of Council – because he’s not hearing a consensus from constituents that they want the board to do it. But he left members the option of a drafting a letter and submitting it for discussion at the February 25 conference meeting – a discussion-centered meeting where the members work out what they’ll vote on at the next business meeting – and Christian has already written one.

Batavia probably won’t be the last New York government asked to take some official position against – or even for – the Reproductive Health Act.

The act and its predecessors languished in Albany for over a decade as the Democratic-controlled state Assembly passed it over and over again and the Republican-controlled Senate kept it from even coming to a vote. And every year it met intense opposition from anti-abortion groups and some religious groups, including Catholic leaders.

The law passed this year because Democrats took control of the state Senate in the 2018 elections and Senate leaders prioritized the bill, as did Assembly leaders and Cuomo. They had deep concerns about the Trump administration and the conservative majority on the Supreme Court eroding abortion rights. Cuomo signed the act immediately after the legislature passed it.

But the opposition has persisted.

“Once it was passed, it was just ‘Whoa’: everybody came out of the woodwork,” says Debora McDell-Hernandez, Planned Parenthood of Central and Western New York’s senior director of public and community affairs.

Batavia provided a second, coincidental example of that visible opposition on February 11, when anti-abortion activist Randall Terry stopped in the city as part of a multi-day tour of Upstate New York. He performed an inflammatory skit protesting the Reproductive Health Act, which he also did later in the day in Rochester.

But with the Reproductive Health Act now in state law, abortion rights are fairly secure in the state, McDell-Hernandez says. Planned Parenthood of Central and Western New York isn’t worried about the Batavia health center getting shut down, because the local government doesn’t have authority to do so, she says. The organization is more concerned with the safety of its employees and making sure that staff who work in the community are educated about what the new state law does and doesn’t do, she says.

As for the ongoing debate in Batavia, McDell-Hernandez says it illustrates the problem with a local government taking a stand on a broad, controversial state or federal issue.

“It forces people to reexamine their role in the community,” says McDell-Hernandez.

And that’s what appears to be happening with at least some Batavia City Council members. Jankowski argues that if the Council picks one side, then the other – which the members still represent – feels alienated.

“It's probably not fair that we go down that road of sending letters as a community when it's not so positive that the whole community agrees with that letter,” Jankowski says.