Aboard the Lake Guardian, scientists fish for the story of Lake Ontario

PHOTO BY MAX SCHULTE The U.S. Environmental Protection Agency's largest research vessel, the Lake Guardian, leaves the Port of Rochester where it had docked over night. Scientists aboard the ship collect data to evaluate water quality, sediment, and animal and plant life.
The Lake Guardian that was docked at the Port of Rochester for little more than a day set sail Tuesday without fanfare. It’s a working ship, after all, not a showpiece, despite attracting much attention from passersby.

Operated by the U.S. Environmental Protection Agency, the 180-foot Lake Guardian is the largest research vessel on the Great Lakes.

When the ice melts each spring, the ship visits each of the five lakes to measure basic water quality and sample the “lower food web” — the tiny animals, plants, and algae that support fish and other aquatic life.

The Lake Guardian hits Lake Michigan first in early April, then heads east to Huron and Erie before visiting Ontario. Lake Superior, where the ship was headed on Tuesday, is the last stop because the ice there tends to linger longer. 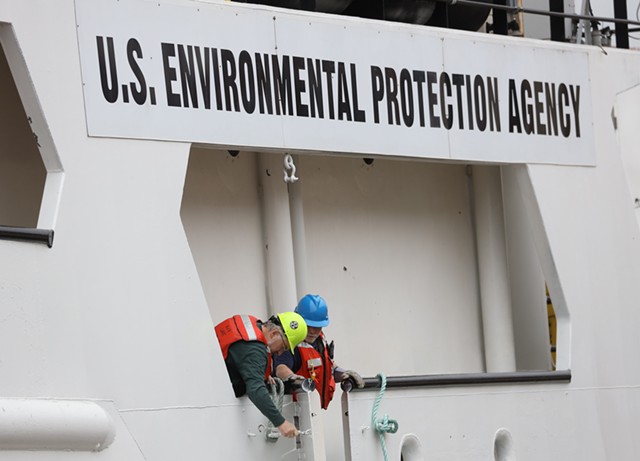 What the dozen scientists aboard do is mundane, not glamorous. They dip nets and buckets and sensors into the water over and over again and measure what they find. It’s basic science — the slow accretion of data that’s scrubbed and rubbed like a genie’s lantern until some new understanding pops out.

Annie Scofield, on her first voyage as the Lake Guardian’s chief scientist, was up at 4 a.m. Monday for the last sample collection before the vessel moored in Rochester for provisions.

It will be months before the data collected they collected on Lake Ontario will be analyzed, but Scofield, a Texas native who earned a doctorate degree from Cornell University three years ago, said it appears water quality and nutrient loads in the lake are relatively stable — at least compared to the past.

By the 1960s, human interaction with Lake Ontario had changed it for the worse. Wanton discharges of sewage and man-made fertilizers, not to mention toxic chemicals, had degraded water quality.

The water was choked with aquatic plants and algae, including the species that that washes up on the shore and fouls beaches was everywhere. The lake was a pit.

Concerted efforts in the United States and Canada in the 1970s reduced the pollutants being dumped in the lake and water quality rebounded. Rotting algae became rare along the shoreline.

Then, beginning in the late 1980s, oceangoing freighters inadvertently brought zebra and quagga mussels to the Great Lakes from waterways in the former Soviet Union.

With none of their natural predators to keep them in check, the small mollusks spread uncontrolled. They feed by filtered tiny phytoplankton (aquatic plants) and algae out of the water, and were so numerous they dramatically improved water clarity.

This might be considered a good thing, except that in so doing they deprived native species of that food source.

MUSSELS TRIGGERING A RESURGENCE OF ALGAE

What’s worse, from a let’s-hit-the-beach perspective, the now-ubiquitous mussels appear to have triggered a resurgence of nuisance algae.

“It’s a fairly complex issue. Researchers are still trying to tease apart the nuances of it,” Scofield said.

But in broad strokes, it’s thought the newly clear water lets sunshine reach farther into the water column and is fueling nuisance algae that grow on the lake bottom.

As well, Scofield noted, mussel beds on the lake, rich with mussel excrement, provide attractive habitats for the resurgent algae.

Beginning about 20 years ago, then, our beaches were once more awash with rotting, stinking algae.

The same thing is being observed in some of the other lakes. If there’s a solution, it hasn’t drifted ashore yet.

Are there more invasive species to worry about? Yes, naturally. 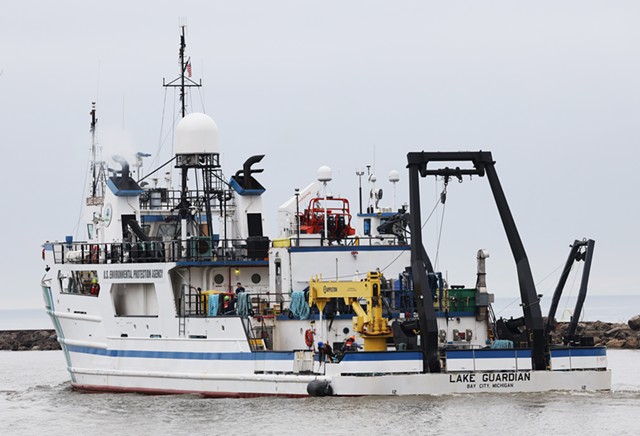 Scofield said measures to control the release of ships’ ballast water — that’s how the mussels got here — appear to be working.

But there is still plenty of non-native biota out there changing the ecosystem in unforeseen ways.

Scofield mentioned a pair of water fleas from the same part of the world as the mussels that have been thriving for the past decade to the detriment of native species.

Larger fish happily devour the fleas, but they’re too bulky and spiky for smaller fish to consume. Populations of those fish could shrink, Scofield said.

NATIVE FISH POISED FOR A COMEBACK

This is the way it usually goes when human action or inaction allows non-native species to move in and alter the landscape. Some organisms may prosper and others not. (Climate change, another kettle of fish entirely, will accomplish the same thing.) There’s concern, for instance, the lake may be too clean — too free of those tiny phytoplankton at the base of the food chain, that is — to be properly hospitable to alewives and the prized salmon that anglers pursue.

“At this point the lake isn’t necessarily too nutrient-poor to support those fisheries, but there has been some concern that the lake may support a smaller population of these fish than they used to,” Scofield said. “That’s a challenge.”

At the same time, the clearer water has shifted resources in such a way that native fish like lake trout may be benefitting. There’s talk about the possibility that cisco, a tasty salmonid that once thrived in the lake, could be brought back.

“Native species may have a little more competitive advantage in the current system,” she said.

Steve Orr is a freelance writer for CITY.