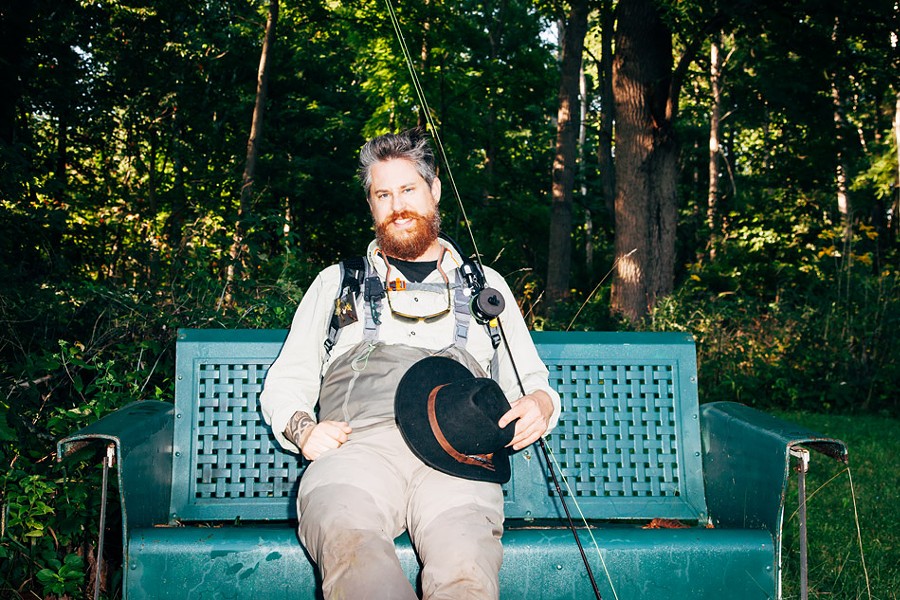 With Susanna Rose and Cavalcade

For a while there, Rochester musician Aaron DeRuyter figured the best way to describe his music was by calling it country. The thing is he didn't really like country ... or did he?

"Eventually it occurred to me that I did actually like country," DeRuyter says. "And I was playing alt-country before I knew it was alt-country. But I almost feel it should be called country-alt."

DeRuyter loves music and he loves fly fishing — both share equal importance in his life.

"To me, they're the same," he says. "2016 marks 20 years since my first gig. And for the first time in 20 years, I have something other than music that gives me that feeling."

DeRuyter first made the scene fronting the Clifton Springs-based rock band Pompous Pilot. It was the post-grunge era and "we came out of the 90's angry, drinking our wine at Milestones," he says.

But as a stay at home dad, playing a Telecaster cranked up to 10 with a baby in the room wasn't such a great idea. So he bought a classical guitar, which led to slowing down, turning down, and the recording of his first solo musical outing, "Transit," released under the nom de guerre DeVall Music.

Coming from what he says was a "house full of folkies," DeRuyter plays some achingly sparse music regardless if it's tagged folk, country-alt, or whatever. He has just released "Astral," the first CD under his own name. Tweaked by producer Justin Roeland, "Astral" is an atmospheric gem full of reflection, self-deprecation, and forgiveness. The pervading primitive sophistication keeps it planted firmly on the ground, while the epic minimalism and sparse techno leanings probe the imagination like dreams.

"I've been clean and sober for two years for the first time in my life," DeRuyter says, equating good music with bad times. "It's amazing because I couldn't write for a long time. You know, you say, 'It's the misery that makes me an artist.' I'd never write songs that were happy. I'd write about things that were bothering me. Now it's still the same, except I can look back on things and say, 'Oh, what a mess I was.'"

DeRuyter keeps the wolves at bay as a musician and as an avid fly fisherman.

"There are days if you don't get your fill of music — in your ears, creating it, or even just pounding on a desk — that leads to frustration," he says. But chances are on most any day, you can find DeRuyter fishing when he's not playing guitar.

"I never hurt a fish," he says. "I make sure my barbs are pinched down; I delicately hold the trout and let the trout go. I don't eat fish. I love fish so much. I wanna touch them, take their picture, and love them. My favorite part is at the very end, when you're holding them in the water and you start to see water filling up into their gills, they do a little kick and splash you, and rip up the creek again. And I just sit there in the water, and I'm almost floored. That's the same to me as a musical orgasm."

Just dig the metaphor when DeRuyter describes his music in angler's language.

"Well, the recording would be the release," he says. "And I almost feel that presentation, mending the line, getting in the perfect drift: that would be like figuring out the structure, finding the melody. When you forget the Am7, you didn't mend the line properly."

And a DeRuyter performance could be described as a sort of catch and release. "I just hope they're not as depressed as I am when I'm through, he says. "What a sad thing when it's over. You kinda want to do it forever."