A wrinkle in time 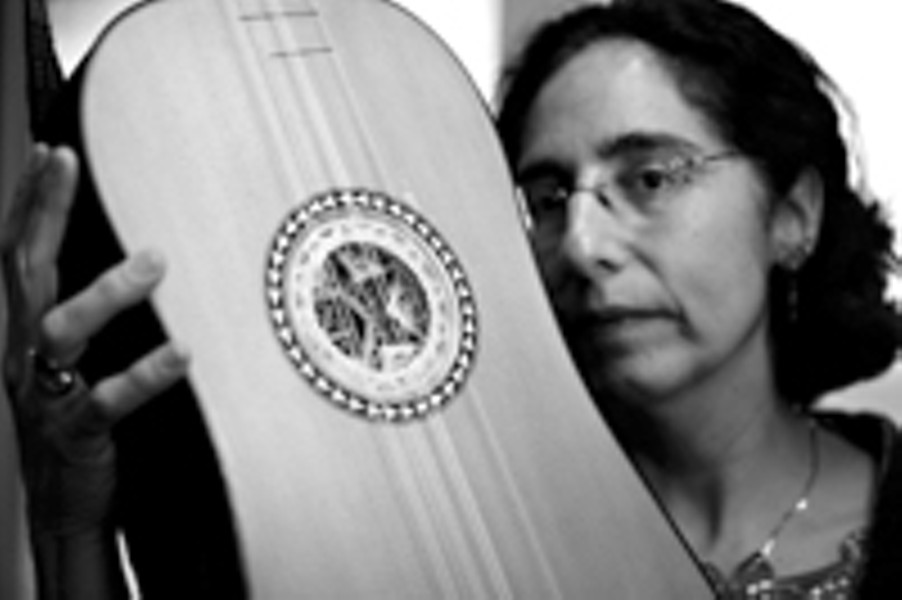 There was nothing cute about the Renaissance. As an historical period, it was marked by bloodshed, plagues, and chaos. Fifteen years ago, when classical guitarist Deborah Fox became fascinated by the era, she admits she held a somewhat romanticized view of it. "I love its beauty and aesthetics," she says, "and especially the beauty of Renaissance music."

At the time, the guitarist was performing classical standards from the 19th and 20th centuries. But picking up a lute one day, she realized something about her choice of instruments that changed the trajectory of her career.

Usually, when she played the guitar for any length of time, her fingers grew stiff and cold. But when she plucked on the lute, a pear-shaped wooden instrument with a fretted neck and a deep, round back, she noticed that her hands didn't freeze. "It just felt like it fit," she says.

So Fox decided to specialize in lute-playing and focus on Early Music. (The term can be a little confusing when everything in classical music seems "early" compared to 50 Cent and Coldplay. Basically, Early Music refers to European classical music before the time of J.S. Bach, roughly spanning the Middle Ages.)

Her decision to focus on lutes has led her through the halls of the Eastman School to study with Paul O'Dette, to Europe and Australia where her skill is in demand, and most recently, to the Rochester Academy of Medicine on East Avenue, a mansion which is home to her own, newly organized concert series, Pegasus Early Music.

At some point, Fox jokes, she forgot that she ever played the guitar.

Like her, thousands of classical musicians find themselves particularly moved by music older than the printing press. Over the last century, a wave of enthusiasm for pre-Bach-era music has swept through conservatories and concert halls. Today, sales of Early Music recordings equal those of all other classical music recordings combined.

The widespread interest has created a kind of cultural wormhole that affects musicians, audiences, and even living composers.

The Early Music revival started with the invention of recording devices, he says. Before LPs, CDs, radio stations, and iPods, composers relied on actually hearing music in person.

"Beethoven couldn't respond to Early Music," says Locke, "since he never heard it performed and there were no recordings in his day." Beethoven could internalizemusic by Haydn and Mozart, however, since he heard it played in concerts. Once hearing it, he took off in new directions.

For composers, the invention of the phonograph opened up a whole universe of ideas.

In the first few decades of the 20th century, musicians began recording stuff they found in musty books and old libraries. Previously unheard-of motets by Palestrina and de Victtoria were stamped out on LPs and distributed to wider and wider audiences. By the middle of the 20th century, critics were raving about the Early Music Revival.

At the same time, a lot of 20th-century music was achieving instant infamy.

Now that we're into the 21st century, Locke says, the vocabulary of Early Music has threaded itself through the works of contemporary composers. Music by living, breathing guys like John Taverner and Arvo Part has been described as "Neo-Medieval." Rochester composer David Liptak says he's felt its influence, too. "I don't have intentional references to chant in my music," he says, "but over the years it's seeped down into the bedrock of my imagination."

Sitting in the Orange Glory Café on East Avenue, lutenist Deborah Fox nibbles a lemon cookie and looks thoughtful. "I don't really know," she says, "but there's a purity about this music and about almost any contemporary music that is hard to put a finger on."

Until recently, she was happy picking up gigs in Baroque operas in Spain, Australia, and elsewhere. But running her own concert series, Pegasus Early Music, gives her artistic control. This weekend, soprano Laura Heimes, lutenist Richard Kolb, and harpsichordist James Bobb will join her in songs by John Dowland and secular tunes by 17th century composers Barbara Strozzi and Benedetto Ferrari.

Fox raves about music by Strozzi, a little-known Venetian composer (1619-1677) who may have been a courtesan as well as a musician. "She has her own melodic and harmonic structure," Fox says. "There's something about it that just twists my heart a little bit."

She also included music by two of the greatest composers of the Baroque era, Henry Purcell and George Frederic Handel, and audience members will hear songs collected in the notebooks of 19th-century English novelist Jane Austen (not exactly Early Music, but Fox is in charge.)

In October, the first Pegasus Early Music concerts sold out. Despite that success, Fox refuses to move to a bigger venue. She says she wants listeners to experience the intimate beauty that enchanted her 15 years ago.

"It offers everyone a chance to slow down and be amazed."