In the early 1990's, as the medium of film's centennial approached, British filmmaker Peter Greenaway decided to hold a series of 10 exhibitions in capital cities around Europe. Each of these exhibitions would, in its own way, reflect upon the language and the history of film. This first installment, held in Geneva, Switzerland, was about location — more specifically, storytelling through the curatorial act of framing bits of an environment. A new, multi-media exhibition at George Eastman House explores the lofty, yet commonplace, concepts behind this work.

In 1994, Greenaway installed 100 white-painted, monolithic wooden staircases in Geneva, each custom built to their setting and leading to a flat wall which obstructed the view ahead. These walls were outfitted with a tiny peep hole into a rectangular frame, through which solitary viewers could peek at the world.

Through the viewfinder, sections of reality became intimately-sized "silver screens," a picture plane with a progression of people and daylight marching against the backdrop of beautiful architecture and manicured nature.

Greenaway visited Rochester in 1997 to present his 1995 film, "Stairs 1 — Geneva," made after the public installation. Years later, Eastman House acquired the master tape of the work as well as exhibition rights. For the duration of this current exhibition, the 107-minute piece will screen continuously in the museum's Project Gallery.

The HD digital transfer of Greenway's original tape showcases each of the 100 Geneva viewpoints in an experimental frames-within-frames format, and includes a narration of what the viewer is seeing.

The viewfinders framed many monuments and sites of historic import, but not exclusively — "Some were just in an alley way, or on a residential street...almost a little absurd, meta-commentary on the show," says Ryan Conrath, the show's co-curator and moving image fellow at Eastman House.

During the run of his exhibition in Geneva, Greenaway planned moments of theatrics with actors, to be spied from the stairs, but the installations also offered plenty of moments of unplanned observation of passersby, who were perhaps oblivious to their witnesses.

"He was interested in showing the figure of the tourist, but making that cinematic," Conrath says.

The interaction between viewer and curated scenes created a set of live motion pictures: the architecture serves as staging, while weather, time of day, and the candid observation of passersby are the happenstance elements that makes the experience unique to each and every viewer.

In addition to screening Greenaway's film, Eastman House has three such sets of stairs installed on its grounds. One is in front of the mansion on the East Avenue side, visible from the street and focused on the front entrance and part of the pathway wrapping the building.

Another set is situated in the terrace garden, pointed through the green space toward the east side of the house, where there is currently a bit of restoration effort going on, providing an extra kick of daily shift in what's pictured. And a third is inside the gallery space, pointing through a hole cut in the wall toward the rock garden and arbor on the University Avenue side of the grounds. 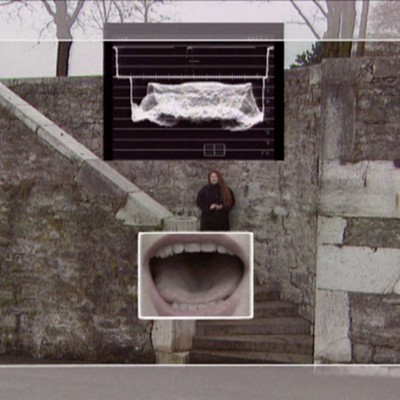 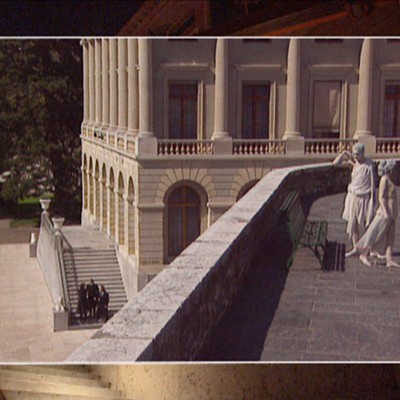 This exhibition is in line with Eastman House's "push for a more frequent and systematic presence of contemporary art," says co-curator and senior curator of motion pictures at Eastman House, Paolo Cherchi Usai.

"I think there is a profound connection between the nature of the work and the mission of the museum," Usai says. "In essence, 'Stairs 1 — Geneva' is a work about the act of seeing. I cannot think of a more compelling relationship between this work and what the museum does in general: explaining the act of seeing through the reproduced image."

Also on display in the Project Gallery is a grid of 100 iconic images from the history of cinema — stills from 100 films in which staircases play an important role, beginning in 1914 with "Cabiria" and ending in 2014 with "Journey to the West."

Some objects take on a privileged position in visual storytelling, Usai says. "Stairs are important because they are the artificial architectural element that redefines our perception of space," adding a vertical dimension to the screen.

Echoing Greenaway's focus on the frame and selection, each still showcases staircases, isolated from the environment of the film. "Just as with the stairways, when the viewer steps away, they'll see the environment again in new way," Conrath says.

Though the "Stairs" in Geneva, and the subsequent film, were meant to be the first installment in a cycle of 10 works, all dedicated to different aspects of the cinematic experience and the act of seeing, Greenaway abandoned the project after just two more cities. The next manifestation took place in Munich, with a focus on "projection"; another planned for (but not completed in) Barcelona was to address the concept of "audience."

Greenaway has a self-professed tendency to leave things unfinished, forsaking one thing to move on to the next. "It's another way of saying the act of viewing, of picking the frame, is our limited, incomplete, ultimately failed attempt to bring order to chaos," Usai says.

This is certainly true of individuals — we each have a frustratingly limited, incomplete picture of the whole, so we curate our existences all the time, framing fragments of reality to urge manageable, if artificial, bits of sense from the greater environment of chaos. But because of Greenaway's emphasis on participation of the viewer, the work continues to take on its own life.

"To bring in the audience is to make the work necessarily more dynamic and to expand the frames of the work," Conrath says.