A very different Lilac Festival is around the corner

April 01, 2021
After a year's hiatus because of the COVID-19 pandemic, the Rochester Lilac Festival will be back this May, but it will be a quite different experience.

Organizer Jeff Springut said Thursday that social distancing and mask wearing are expected to be enforced for the 123-year-old festival. Those aren’t the only changes coming.

“Will it be the same as pre-COVID? No way,” Springut said. “Will it give us a chance to get out and socialize? You bet.”

Springut said they jumped through a lot of hoops to make the festival happen, including consulting with local health officials and bringing ideas that have worked elsewhere to the table.

“We speak with concert and festival promoters from around the country and compare notes,” Springut said. “So it's a group of kooks who like to do this and take risks and have some fun and make some money.”

He said patrons will have to register for expos —there are craft beer and wine tasting events, along with a supper club —to keep crowds small. Food and beverages will be brought to tables instead of having people line up at food trucks. There will be no live music during the expos, but there will be separate concerts including local favorites Big Eyed Phish and Jumbo Shrimp. Springut said more shows will be announced.

The traditional Lilac Runs and Dunkin' Dash will be held at Genesee Valley Park, but runners will be socially distanced.

County Executive Adam Bello said it took a lot of coordination and planning to make this event possible and safe, but it's worth it.

“This has been an incredibly tough year," Bello said. "And after all we’ve been through, we need to celebrate." 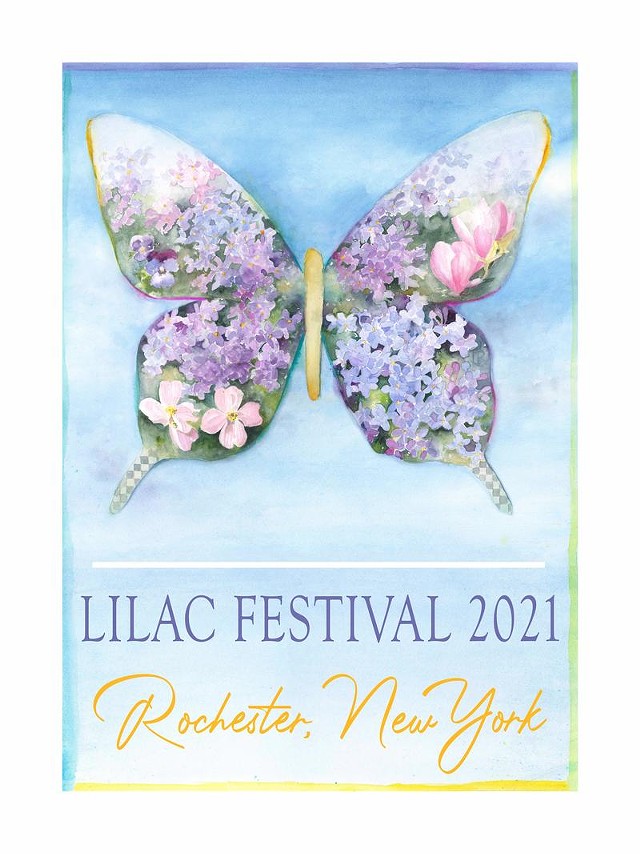 James Smith, Rochester's deputy mayor, said the festival is happening because  private and public groups are working together.

“This is a wonderful announcement because it's a sign that we’re going to be back, and it is a win as the county executive said,” said Smith.

This year’s Lilac Festival poster was unveiled by local watercolor artist Lisa Robinson. It shows a butterfly with lilacs in full bloom depicted on its wings. She said it represents our resurgence after COVID-19.

“I just thought it worked out very well with the whole idea of what we’ve been through this past year and how we’re going forward in the future,” Robinson said.

The festival will be spread across three weekends starting May 7.  Special event tickets go on sale Monday.