A taste of France in the East End

Vive Bistro and Bakery wants to make vegan food more inviting for the uninitiated. "We find if we refer to our menu as plant-based, it's a lot less scary for people," Nick Lemesis says with a laugh. Lemesis is co-owner of Vive Bistro and Bakery (130 East Avenue), a new French-inspired vegan restaurant in the East End.

The restaurant is owned by Lemesis, Pam Hathaway, and Keith Savino. Vive's executive chef, Mark Demara, recently moved back to Rochester after working for a few highly-rated, farm-to-table restaurants in Los Angeles. Lemesis and Hathaway worked together at Warfield's Highpoint, a now-closed, high-end restaurant in Victor. The two later re-connected, after both working at various Rochester restaurants, to open Vive. Hathaway and Savino, who are both vegan, saw a need for more vegan cuisine options in Rochester. After scouting more than 30 locations around the city, the space formerly occupied by Fraîche Bistro and Dessert Bar became available. 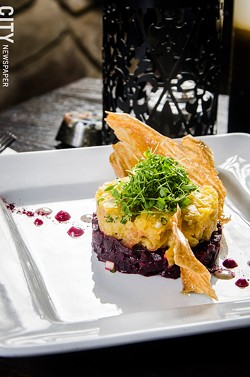 Vive currently only serves lunch, with plans to add a brunch menu next — and the restaurant will open for dinner once it receives its liquor license. "I used to open new locations for a commercial chain restaurant — we have seen the right and wrong way to do things and we want to do things the right way," Lemesis says.

Everything is made from scratch at Vive and the menu is friendly for the gluten-free crowd. The crust for the socca pissa is made with chickpeas — the Pear and Fig socca pissa ($14) is topped with a fig and black olive tapenade, pear, bleu cheese, and arugula. The restaurant uses house-made artisanal bread to build its sandwiches, like the Warm Portobello sandwich ($9), which comes with a spinach and parmesan spread.

Words normally associated with meat-based dishes like "pâté" and "tartare" are re-imagined with vegan ingredients, like the walnut, butter-pecan, or wild mushroom pâtés ($7.50 each) and the beet tartare ($7.50). The fresh, cracked, young Thai coconut ($7) is just that — a coconut cracked in half and served with a straw — fresh coconut water with no preservatives.

Vive Bistro and Bakery is located at 130 East Avenue, and is open daily for lunch from 11 a.m. to 3 p.m. Vive also offers catering and special event services. 481-2021. Visit its website at vivebistro.com.

You can't keep a good toad down. After a water pipe burst and caused flooding in The Old Toad (277 Alexander Street), the pub is back in business after closing for a few days of clean-up — just in time for its Keegan Ales Rochester Kickoff Party taking place on Thursday, March 19 at 5 p.m. More details on the event can be found on The Old Toad's Facebook page and on its website at theoldtoad.com.

The Tap and Mallet (381 Gregory Street) will host a Ciders of New York Tasting on Wednesday, March 25 at 6 p.m. Tickets are $10 and attendees can sample ciders from Eve's Cidery, BlackBird, Steampunk, and more. Light fare will be included in the ticket price as well. Visit the Tap and Mallet's Facebook page or its website (tapandmallet.com) for more information on purchasing tickets.

Cure's Caitlin Graham and Chef James Revels will give a presentation on food and wine pairing, forced meats, selecting seasonal produce, and traditional French technique at Rosario Pino's Artisan Foods (349 West Commercial Street) on Monday, March 16, at 6 p.m. The event also includes a tasting menu. Reservations are $79 and can be arranged at rosariopinos.com.

America's love affair with bacon has no end in sight. If you've ever been drinking a nice Rosé and thought, "This should definitely be paired with bacon," you're in luck. Cayuga Lake Wine Trail will host Bacon on the Lakein on the weekend of Saturday, March 21, and Sunday, March 22. Visit the 17 wineries that make up the Cayuga Wine Trail and sample bacon-featured dishes along the way. Tickets are $30 and transportation packages are available. Tickets can be purchased by calling 1-800-684-5217 or order online at cayugawinetrail.com.

A Greece location of MacGregor's has opened at 300 Center Place Drive.

EDITOR'S NOTE: Aubrey Berardini, a member of City Newspaper's art department, works with Vive Bistro and Bakery. She was not involved in the generation or writing of this story or in its production.