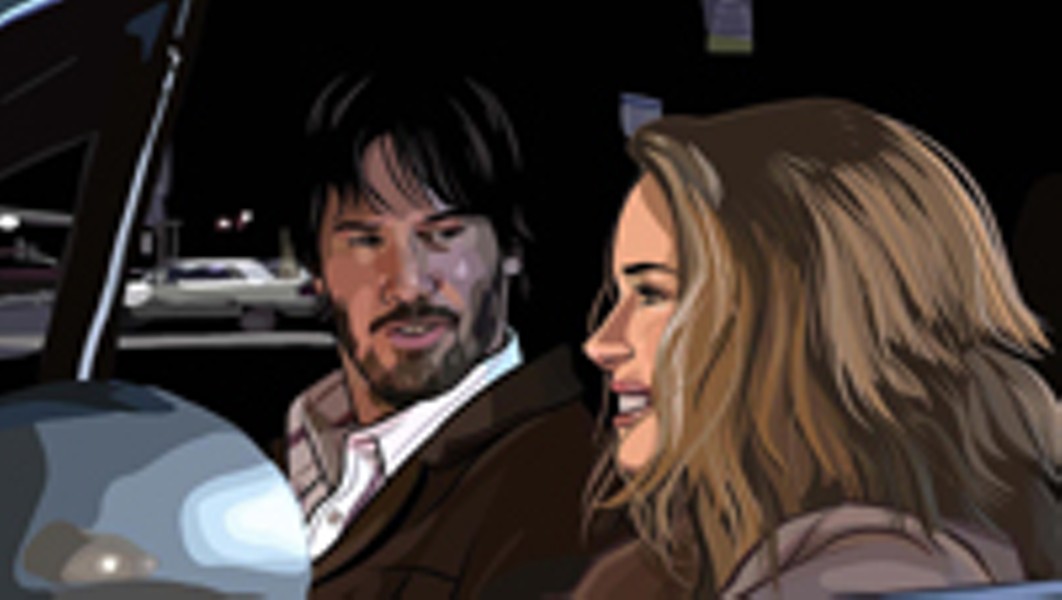 Warner Independent Pictures Drawn together: Keanu Reeves and Winona Ryder get the rotoscope treatment in Richard Linklater's "A Scanner Darkly."

A Scanner Darkly (R), written and directed by Richard Linklater, is now playing at Little Theater and Pittsford Cinemas.

As the new movieA Scanner Darkly demonstrates, Hollywood continues its profitable exploitation of Philip K. Dick's richly imaginative and highly individual approach to science fiction. His work inspires a wide range of pictures, all distinctly different from the usual matter of robots, rocket ships, and ray guns --- Total Recall, Blade Runner, Minority Report, and most recently Paycheck --- and all of them in one way or another are concerned with such subjects as the workings of the mind, the peculiar connection of memory and identity, and a generalized cultural paranoia.

One of the weirdest of all Dick-inspired films so far, A Scanner Darkly employs some of the author's familiar material, but presents it in a very different manner from those other titles. Set in Southern California in the near future, the picture deals with the entirely contemporary problem of the so-called war on drugs, a conflict actually lost by the time the action begins. Most of the film revolves around the police surveillance of a small circle of friends, including Keanu Reeves, Robert Downey Jr., and Woody Harrelson, who use and deal drugs, including a powerfully addictive and destructive pill known as Substance D.

Among other side effects, Substance D causes vivid hallucinations --- the film opens with a character finding himself, his dog, and his apartment infested with nonexistent but nonetheless horrible insects --- debilitation, and eventually, death. Reeves, an undercover cop, not surprisingly becomes addicted himself and therefore in effect the object of his own investigation, forcing him to betray his friends, his mission, and himself.

Once establishing that situation, and none too clearly at that, the picture struggles along with a sketchy plot, a flimsy story, and some most unattractive characters. The three friends, a terrifically uninteresting crew, spend most of their time simply hanging out in Reeves' squalid house, doing drugs, talking about doing drugs, and acting amazingly stupid. Much of the dialogue seems as improvised as the plot, with Downey, something like the house intellectual, uttering a series of complicated, occasionally inspired verbal riffs, mostly on the subject of the influence of Substance D and the familiar cultural paranoia if constant surveillance.

The most notable characteristic of A Scanner Darkly, however, involves its cinematic method, a strange and sometimes unsettling form of animation its makers call digital rotoscoping. They apparently film the actors in more or less orthodox fashion, then through some form of advanced technology, visual magic, and a great deal of painstaking work, apply lines and colors to the images in the manner of an animated cartoon. The technique creates an odd combination of live action and cartoon, where everything and everyone look simultaneously real and unreal.

The process also endows the characters, their lines, and their feelings with a strange sense of flatness, so that nothing in the movie engages much in the way of intellectual or emotional interest; when the plot ends up quite literally going nowhere at all, it captures exactly the right tone for the film's vacuity. The rotoscoping justifies itself most fully and effectively in the movie's use of the garment that Reeves and his fellow undercover cops wear to avoid identification, called a scramble suit. The suit not only covers them completely, but also shifts its shape and appearance constantly, so that the character appears always to be changing into someone else --- short or tall, bearded or clean shaven, man or woman, wearing an infinite number of costumes.

Intentionally or not, the scramble suit provides the central metaphor for a film devoted to the author's familiar examinations of identity and paranoia --- nobody, including the cops themselves, knows who might be inside the strange, shape-shifting garment. It also perfectly fits the curious and otherwise generally inexplicable method of the digital rotoscoping, which might be the only film technique capable of handling the constant and distracting metamorphosis.

Aside from the inherent value of Philip K. Dick's inspiration, A Scanner Darkly achieves very little beyond the mere fact of its unusual visual technique. Rotoscoping may provide a useful medium for displaying hallucinations, madness, and kaleidoscopic metamorphosis, but it fails badly in the natural business of narrative, character, and meaning --- which is, after all, what movies should be about.