A safe space for talking about visits from outer space

PHOTO BY JACOB WALSH Virginia "Cookie" Stringfellow of Irondequoit says she has had experiences with extraterrestrials spanning over 40 years.
One by one, a few dozen members of the New York Chapter of the Mutual U.F.O. Network logged into the organization’s monthly virtual meeting on the third Wednesday in April.

It was a proud moment for the group, a nonprofit composed of civilian volunteers who study reported sightings of unidentified flying objects.

Two of its members, Virginia Stringfellow, of Irondequoit, who goes by “Cookie,” and Chris DePerno, a retired police detective from Syracuse and the chapter’s assistant director, had been recently featured in The New York Times for a story on a spike in reported U.F.O. sightings during the pandemic.

Rarely do people who claim to have encountered extraterrestrial life make mainstream news. Although Stringfellow was disappointed in the portrait of her stargazing from the shore of Lake Ontario that illustrated the piece.

“She told me to look up, and, ugh, I hate that,” Stringfellow said.

In the past year, sightings of unidentified flying objects have nearly doubled in New York, to about 300, while nationwide, sightings increased by more than 1,200 cases. It’s a phenomenon that, much like the subject of interest, doesn’t have a clear cut explanation.

Some academics have attributed the surge in sightings to a combination of less light pollution and many more people having free time to scan the night sky.
U.F.O. researchers, as members of the group refer to themselves, have another theory: the recent declassification of a few federal files on “unidentified aerial phenomena,” as the Pentagon refers to U.F.O.s, has empowered witnesses to step forward with less fear of public shaming. Stringfellow said groups like hers offer a safe space to discuss experiences.

Stringfellow lives in a tidy ranch house adorned with a variety of alien figurines she has collected over the years. A cutout of an alien face dangles from the door leading to her living room from the patio.

Unlike some of the newcomers to her group whose supposed close encounters with the otherworldly are fairly recent, Stringfellow’s belief dates back more than 40 years, since the first time she recalls being taken aboard an alien spacecraft, a happening she says has reoccurred many times since.

“It happens when I’m sleeping, and I get like a tingle like from the first experience, and then I know they’re here,” Stringfellow said. “They kind of put you to sleep, but you’re not really asleep, you’re awake, but you can’t move.”

Over the course of an hour, Stringfellow explained the different extraterrestrials that visit Earth — from human-like “Nordics” to iguana-esque “Reptilians” — and her experiences with them. She believes the beings have had a relationship with Earthlings spanning eons.

“They’ve been here for millennia, long before us,” Stringfellow said. “They’ve always been here.”

Her view differed greatly in tone from the guest speaker at her group’s meeting, Marc D’Antonio, who has a degree in astronomy and is the chief video analyst for the national MUFON group.

D’Antonio focused largely on star formations, exoplanets, and astronomy in general, with hints of something mysterious being out there. He also spoke of how many U.F.O. sightings can easily be explained as airplanes, satellites, or meteors.
At the same time, he acknowledged having seen something he couldn’t explain just a week earlier over Mesa, Arizona.

“I’m not afraid to tell you that I don’t know what it was,” D’Antonio said. “For the first time, I can say I saw a true object that is an unidentified object.”
MUFON insists its research is grounded in science, noting that upward of 95 percent of the reports of U.F.O.s it examines can be attributed to humankind. The remainder, the group says, are truly unidentifiable and worthy of further discussion. 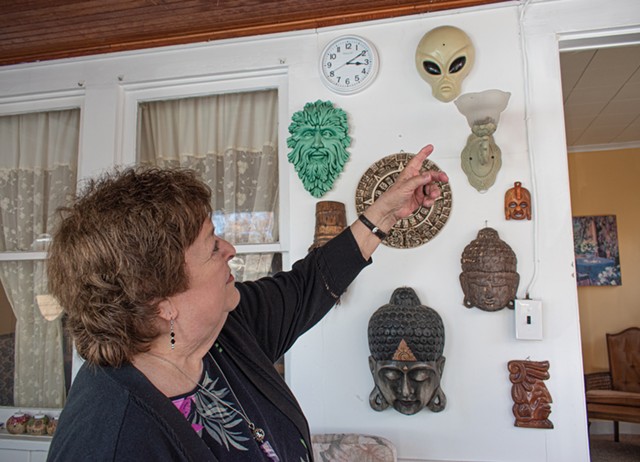 But can the study of U.F.O.s, known as “ufology” (pronounced yoof-ology), be a legitimate science if it seeks only to research unanswerable questions?

“The number of ones that are interesting, and I’m making this up, but out of 10,000, one or two might be, ‘Oh, well we don’t know what it is,’” said Adam Frank, an astrophysicist at the University of Rochester. “Going from not knowing what it is to it’s an alien from an advanced civilization that’s come here is a giant leap.”

Frank’s position should not suggest that he isn’t seeking an answer to what is perhaps humanity’s most profound question: Are we alone in the universe? In 2016, Frank co-authored a paper published in the journal Astrobiology that was an update to the Drake equation, a mathematical formula proposed in the 1960s by Cornell Professor Frank Drake used to estimate the number of communicating civilizations in the cosmos. The equation factors in the number of potentially habitable planets, and the likelihood of that planet cultivating a technologically advanced civilization.

Even the most pessimistic of estimates puts the number of alien civilizations through the existence of the cosmos in the billions.

“We understand how large the universe is, we understand that in our galaxy alone, there are 100 billion stars, each one of those stars has at least one planet,” Frank said. “It’s easy to imagine that we’re not alone. That what’s happened here has happened elsewhere.”

That scientists have come to view planets outside our solar system as commonplace is relatively recent. They only first confirmed a planet orbiting a star other than our sun in the 1990s. Today, though, scientists have identified more than 4,700 of these exoplanets. Many are in what they believe is the “habitable zone” of their orbits, in which conditions are thought to be ripe for the surface of the planet to hold liquid water and, thus, life.

The field of study netted Frank a grant from the National Aeronautics and Space Administration last year to search for “technosignatures,” or signs of technology used on planets outside of our solar system.

“The thing is, what I want people to understand is the science right in front of us is way cool,” Frank said. “These alien worlds that we’ve already found are just crazy.”

The question of whether we’re truly alone is a tantalizing one. Christopher French, an anomalistic psychologist at Goldsmiths, University of London, points to a quote from the late science-fiction icon Arthur C. Clarke: “Two possibilities exist: either we are alone in the universe or we are not. Both are equally terrifying.”

“There’s a lot of different takes that people can have on the U.F.O./alien phenomenon, it varies from person to person,” French said. “The one thing they all agree on is that there is something happening, whether it’s aliens, it’s beings from different dimensions, it’s time travelers, whatever ideas they’ve got, there is something happening here.”

French argued that each of those beliefs is influenced by confirmation bias, a trait all people share that explains why people are more likely to accept as true information that reaffirms their beliefs. That could manifest as a believer deciding that a video of a proclaimed flying saucer is evidence that U.F.O.s exist. If the video is debunked, a believer may see that dismissal as a cover-up or as adding validity to other inexplicable phenomena.

There is something of a quasi-religious aspect for some U.F.O. believers, French said, and some may be “looking for answers from above.”

French counts himself a skeptic, but he also believes he has a responsibility to remain open to the possible existence of supernatural events. But he hasn’t seen convincing proof, and has taken the position that U.F.O.s and many other supposed paranormal events are more psychosocial than out of this world.

People seek comfort, community, and belief systems to tie them together, and local groups dedicated to researching these events can offer those things, especially in uncertain times, like the ongoing pandemic.

“There’s quite a lot of evidence to support that in times of great stress and uncertainty, all forms of magical thinking, which includes all sorts of paranormal beliefs, assorted conspiracies, U.F.O.s — I’m an atheist, so I’d include for me, religious beliefs — they all increase,” French said. “It’s almost as if people are trying to make sense out of what’s happening around them.”

It is worth noting that the Pentagon takes U.F.O. sightings seriously. The Department of Defense recently announced that it would convene a task force to report on “unidentified aerial phenomenon” said to have been witnessed by military personnel. The report is set to be submitted to Congress in June and was part of the federal $2.3 trillion relief package in December.

Perhaps naturally, the task force appears more concerned with the potential threat posed by these phenomena than what an encounter with a sophisticated alien life form would mean for human existence.

“The committee remains concerned that there is no unified, comprehensive process within the federal government for collecting and analyzing intelligence on unidentified aerial phenomena, despite the potential threat,” the bill establishing the taskforce read.

Some nights, Stringfellow heads to the shore of Lake Ontario with a close group of like-minded believers to watch for signs of something anomalous. Across the water in years past, a similar group of skywatchers in Toronto has done the same in years past. They keep in contact through the night as they log their observations.

Stringfellow said she isn’t bothered by skeptics. What some people would dismiss as her “beliefs” are, to her, realities she said most people don’t take the time to research. Much of her research, she said, leads her to YouTube, where an endless stream of U.F.O. sighting videos can be found with a simple query.

She doesn’t expect naysayers to see what she sees. But she hopes people will at least be willing to ask questions.

It is a philosophy boiled down in the motto of her email signature: “Always look up.”