Yarms: a profile in musical curiosity

If you've frequented the folk and singer-songwriter circuits in Rochester in the last 10 years, you've probably heard Ryan Yarmel play. Known also simply as "Yarms," he's been a fixture in the local music scene. In the past, he's held down the bottom line on the upright bass in Americana-roots groups The Younger Gang and Aaron Lipp & The Slacktones. And he performs original songs from his album "Polka Dot Swing" as a solo artist and as frontman for the country-western outfit Yarmsband, in addition numerous other music projects.

Every Wednesday this month at Abilene Bar and Lounge, Ryan Yarmel is hosting a concert series called the "Yarms February Frolic." The four gigs highlight his sonic ubiquity as a member of diverse Rochester bands, including folk outfit The Sugargliders, blues duo Hotel Cadillac, electroacoustic acts Funscape and Sparx & Yarms, and the rock band Great Red. 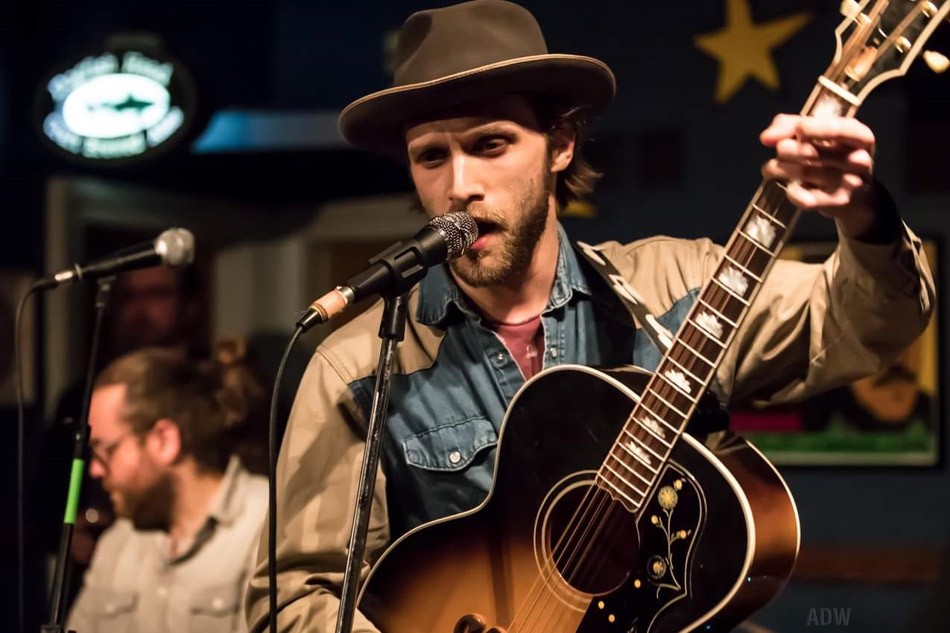 The February 6 lineup featured rising acts Madeleine McQueen and The Sugargliders alongside Hotel Cadillac, and February 13 showcased the rock stylings of Anamon and a retooled Great Red lineup with Yarmel on bass. The next concert, on Wednesday, February 20, is perhaps the most left-of-center, with electro-tinged music from Sparx & Yarms in a rare live appearance, along with sets from Funscape and the mysterious outsider Beef Gordon.

The residency closes on February 27 with a high-energy show from Yarmel's Americana-country group Yarmsband and the psychedelic surf rockers Televisionaries.

Yarmel's February series comes at a time when music residencies in Rochester frequently feature tribute shows that pay homage to an influential music legend or commemorate a specific, game-changing album. In contrast, all of the musicians featured during Yarmel's tenure at Abilene are performing original material, with the possibility of a cover song sprinkled in. Through a music residency, concertgoers can seek out a curated listening experience from someone whose taste and musical abilities they trust. Yarmel's programming choices seem to reflect a desire to introduce listeners to new sounds. 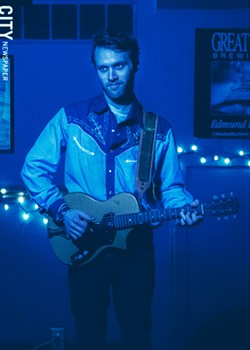 "This is sort of a bookmark in what I've done musically up to this point," Yarmel says. "I have more to give." The residency at Abilene enables the 26-year-old Fairport native to assert himself as both an active musician in the Rochester scene and a promoter of it. In addition to his seemingly innumerable musical endeavors, Yarmel serves as store manager at Bernunzio Uptown Music. Recently, he's also served as a fill-in host for Scott Regan's "Open Tunings" on WRUR 88.5 FM; he now hosts "Ryan Yarmel's Show" on WAYO 104.3 FM.

In addition to his formidable work as a songwriter, Yarmel is familiar with playing more of a supporting role in the creation of songs, as the bass player in both Great Red and The Sugargliders. Great Red's frontman Zach Kochan – who also plays in The Sugargliders and Funscape – has witnessed Yarmel's musical versatility firsthand.

"Music comes to Ryan so naturally," Kochan says. "His ear is unbelievable. His feel is so good. He could be a virtuoso musician, but his taste is so incredible that he really knows how to serve a song. For instance, in Great Red, he's sort of the bass player that I always wanted in that band. His emphasis is so much more on feel than anything else that it breathes new life in the band for me."

Yarmel's willingness to do what is best for the song is evident in his flexible songwriting approach. "I don't think there's any criteria that I have when I write a song," Yarmel says. "I mean, it just happens. I usually write most songs by myself on acoustic guitar. But oftentimes, songs – particularly more with the electronic-ambient bands – will come out of pre-writing that I'll just do." 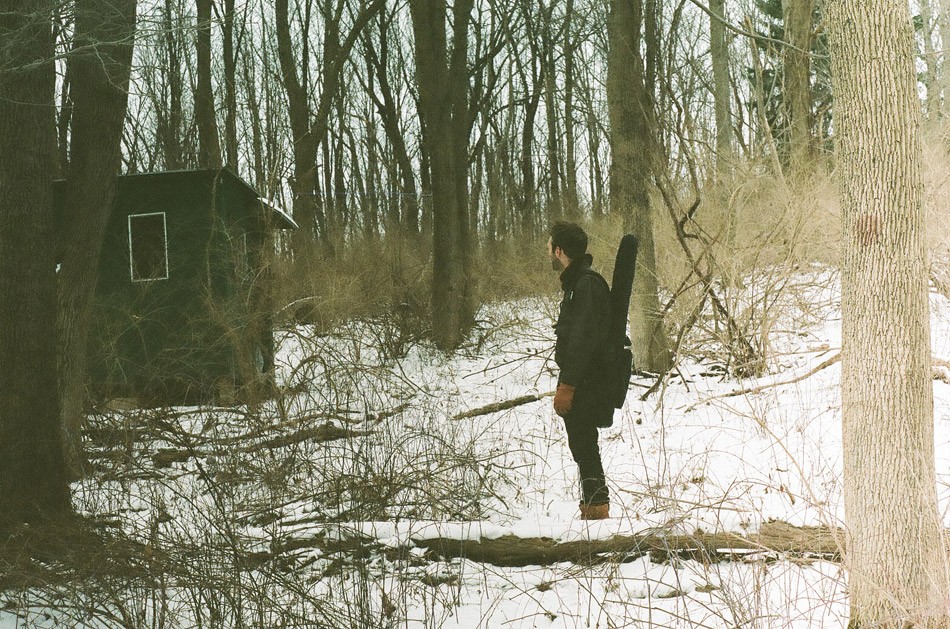 In writing songs with Yarmel for their trap-inspired, electronic folk duo Sparx & Yarms, musician Cody Sparks was struck by Yarmel's openness to change. "He was really receptive to changing up what he already had," Sparks says. "He would show it to me, and then he would be like, 'I have this, but I'm willing to completely change it.' And then we would take it and make a beat over it, and all of a sudden, his song that was really fast-tempoed and more like a traditional folk song was suddenly 60 BPM and really slow, with a weird hip-hop beat. He was just completely open to that idea." 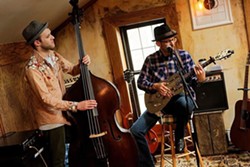 Yarmel gets very specific when he's explaining his role as bass player in The Sugargliders. "Why I wanted to play with them is because I saw them live a lot," Yarmel says, "and just was so impressed by what they were doing, and felt that I could honor their sound and make it better: lay down the foundation to what they were doing, increase it and flesh out more. I just felt like what they were doing was so good and sacred that if I could be a part of it, it would bring me a lot of joy, but also help this band sound even more amazing."

For Yarmel, it seems as though his goal in The Sugargliders is to coax a poignant, previously hidden aspect of the music to the fore. "With this band," he says, "what I'm doing is what I've done in a lot of bands – exposing and really bringing to the front of the picture the hypnotic element in folk music."

The aesthetic of hypnosis is present in his other projects as well, he says, citing the electronic instrumentation of Sparx & Yarms and the psychedelic country inclinations of Yarmsband. Despite all of the stylistic differences, Yarmel maintains that folk music is at the core of his residency's focus. 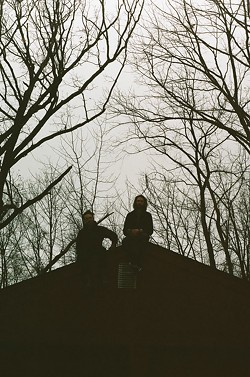 "Every single band that is playing in this residency is a folk band at its heart," Yarmel says. Oddly, he even cites Beef Gordon, the post-punk-meets-lounge-singer, as a folk act. Asked to define folk music, Yarmel's response is broad and curious, but it makes sense: "I think it's music that talks about folks and their stories – what they're going through."

Despite Yarmel's liberal definition of folk music, his traditional roots as an Americana-folk singer-songwriter are more clearly evident in his solo project Yarms as well as in the Yarmsband. Here, the songs are acoustic-driven and more often follow conventional storytelling narratives.

That said, it's clear that Yarmel's songwriting can't be pinned to any one genre. When he creates songs, he says, he's "writing them so that they could be timeless, so not having too many specific cultural references." It's likely that over the course of the residency, he says, he will play the same song three separate times, filtered through three of his different projects.

As you might expect, Yarmel's influences are idiosyncratic. He has obvious heroes like folk rock legend Neil Young and the late country musician Hank Thompson, but he's also a classically trained double bassist who was inspired to take up the instrument as a child after hearing the Beatles' "Strawberry Fields Forever." He went on to play in the Rochester Philharmonic Youth Orchestra and developed a love for the epic, late-Romantic symphonies of composers like Gustav Mahler, Jean Sibelius, and Anton Bruckner. Zach Kochan remembers connecting with Yarmel over Brit-pop artists like Oasis, Blur, and Gorillaz.

Ryan Yarmel is a musician rooted in the earnest storytelling of folk, but there's a stylistic restlessness that disregards genre labels in favor of honest artistic expression. The result is a head-in-the-clouds approach to songwriting: Yarmel hasn't forgotten his musical origins, but he isn't confined by them, either.