La’Ron Singletary, the former chief of Rochester police, seems like an unlikely candidate for Congress.

Aside from never having pursued any elected office before, he rose to prominence over controversy. Namely, his handling of the death of Daniel Prude in 2020. Singletary, then just a year on the job, resigned in the fallout from the release of police body-worn camera footage of Prude’s arrest, and, before he could depart, was fired by former Mayor Lovely Warren.

After a year of relative quiet, Singletary, a former Democrat, appeared alongside a who’s who of local Republicans at the Joseph A. Floreano Riverside Convention Center to announce that he would challenge Democratic Rep. Joe Morelle, a career politician who has held the seat since 2018.

If history is any indicator, Singletary has an uphill battle. In a district where enrolled Democrats outnumber Republicans nearly two to one, Morelle has trounced the two Republican challengers he has faced by double-digit percentage points.

But Singetary cannot be counted out. Republicans have in the not-too-distant past occupied some of the territory now contained within the district, and Singletary’s background in law enforcement may appeal to a motivated segment of voters.

“I think Singletary could appeal to demographics that are not the traditional Republican base, which is older, white, and male,” said Tim Kneeland, a political science professor at Nazareth College. “So, yeah, I think this could be a closer race.”

When it comes to finances, though, Morelle has a distinct advantage. As of the most recent campaign finance filings on record, Morelle had nearly $749,000 in his war chest. Singletary had roughly $233,100 on hand, including $100,000 of which was in the form of a loan. 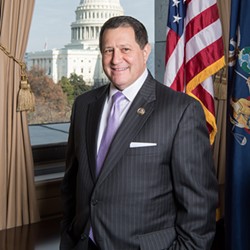 Morelle had been fairly quiet throughout much of the campaign cycle, despite constant baiting from Singletary and his supporters to cast him as anti-police.

That changed over the summer, however, as Morelle began to push back, referring to his opponent as “extreme” and trying to dispel claims that Morelle had supported efforts to “defund the police.”

“I continue to support aid to law enforcement, both on the federal and state levels,” Morelle said recently. “Frankly, it’s really, really frustrating that he built his entire campaign on what he knows is a lie.”

Asked why he seemed to take so long to defend his record, Morelle offered a swift retort.

“No disrespect to La’Ron, but he doesn’t have a job, he’s been campaigning full-time for Congress for a year,” Morelle said. “I actually have a job, and I take it as seriously as anyone here in Washington.”

Morelle, a longtime Democratic political rainmaker in Monroe County and former state Assemblymember, was elected to the House in 2018, filling the seat last held by the late Louise Slaughter.

Since then, Morelle has legislated in an increasingly polarized political landscape. He said he believes the growing wedge, sharply illustrated by a rejection of the 2020 presidential election by many Republicans, is a threat to democracy.

“We’re at, in many ways, a pivotal moment in not only American history, but world history,” Morelle said. “I think democracy needs to be defended, we can’t just accept as an article of faith that it will just be here.”

Morelle’s policy positions can perhaps best be described in the current landscape as moderate. He has supported much of President Joe Biden’s agenda. He has been a proponent of banning semi-automatic rifles and large capacity magazines, and backed the Biden administration’s plan to forgive up to $20,000 in student loan debt.

He pointed specifically to his co-sponsoring a bill by Rep. Joseph Courtney, a Democrat from Connecticut, which proposes to fix student loan interest rates at 0 percent.

“Certainly the student debt burden is holding a lot of people back from purchasing homes, from moving forward in their careers, so I’m certainly comfortable with the elimination of debt up to a certain amount,” Morelle said. “However, you have to balance that back against the fact that there are a lot of people that chose not to go to college.”

His campaign team did not respond to several requests for an interview.
In late August, however, he sat for an extensive interview with Evan Dawson, the host of the talk radio program “Connections” broadcast by WXXI Public Media, the parent company of CITY.

During that interview, he pointed to former Secretary of Defense Colin Powell as his political idol, and laid out his stances on the state of the nation, but offered sometimes opaque answers to hot-button issues, including gun control and abortion.

When asked if he believed, as many Republicans seem to do, whether there was widespread fraud in the 2020 presidential election, Singletary answered indirectly.

“President Biden is the president,” Singletary said. “That’s a question that’s being asked by a lot of Republicans and many people, but it’s a question I’m not going to fall into.”

There has been no evidence found of significant voter fraud in the presidential election.

On gun control, Singletary emphasized the right for Americans to protect themselves and pointed out that minorities are more likely to be denied access to firearms.

When pushed on his position on specific measures, like the banning of bump stocks, he said that should be viewed on a case-by-case basis and that one has to “look at the individual.”

“It’s almost like car crashes, when you expect law enforcement to go out there and enforce seat belt laws, or speed enforcement,” Singletary said. “As a police chief, we typically don’t take away the cars. You can’t legislate behavior, but you can deter it.”

Describing himself as “pro-life,” Singletary said he wants policies that help women, particularly Black women, make decisions that they “don’t feel they were forced into.” He did not comment directly on if he supports the right to abortion.

Singletary did describe family values as a key concern of his, though, and expressed a need for preserving traditional family structures.

Morelle and Singletary do agree on one issue: trade schools should be emphasized and funded as an alternative to a college education.

“The price of college is certainly rising, and I think when we offer trades and vocations to high schoolers, they can enter a field where they can make a decent salary, they can get great benefits, and they can provide for themselves and their families,” Singletary said.