A new twist on an old space

Matthew's East End Grill has been closed since 2017, but it feels like an eternity. The former restaurant and pub was my introduction to the East End when I was new to Rochester. It was an established bookend for the building that once was a Chevrolet dealership, with Spot Coffee being the other bookend. It was the perfect spot for viewing a parade in the spring or to simply people-watch on a lazy summer day from the outside patio. Matthew's was a true staple of the neighborhood, and when it shut down three years ago, the block seemed somewhat hollow. Yes, it was just a business, and businesses come and go, but the empty space created a void in the neighborhood that was only briefly filled by sandwich joint Steadfast. Until now. Twisted Tap, the new bar and restaurant that occupies 200 East Avenue, will be open for business on Friday, February 14.

On my way home from a long road trip in early January, I decided to get off the highway and drive through the city, if only to break up the monotony of barely-lit road and an abyss of blurred trees I whizzed past. As I drove down East Avenue, I expected to see the same empty shell that I had been passing for the last three years. Instead, all the lights were on, and as I got closer I could see that the place was packed with people. Was this a private party for the residents upstairs?

Being nosy, I parked my car to investigate. I walked up to the door and saw the "Twisted Tap" sign hanging above it. Not only was the empty bar space lit up, but it was bustling with noise. I was still in disbelief. I'd been on the road for seven hours. What if I was just hallucinating all this? Maybe I was walking into a paranormal trap. Or maybe I listened to too many Stephen King audio books on my road trip, and I should just relax.

Sure enough, the Twisted Tap is a real bar, and I had just stumbled upon their soft opening. Owner Jeff Limuti was hosting a "Packers Backers" watch party for the Green Bay Packers vs. Seattle Seahawks game. Gold and green adorned every surface, people were rocking foam 'cheesehead' hats, and nearly everyone had a beverage in their hand ready to cheer on their team and toast their victory. It was a busy Sunday. I had intended to just head home after my long drive, but I felt the need to take in the energy of this place. 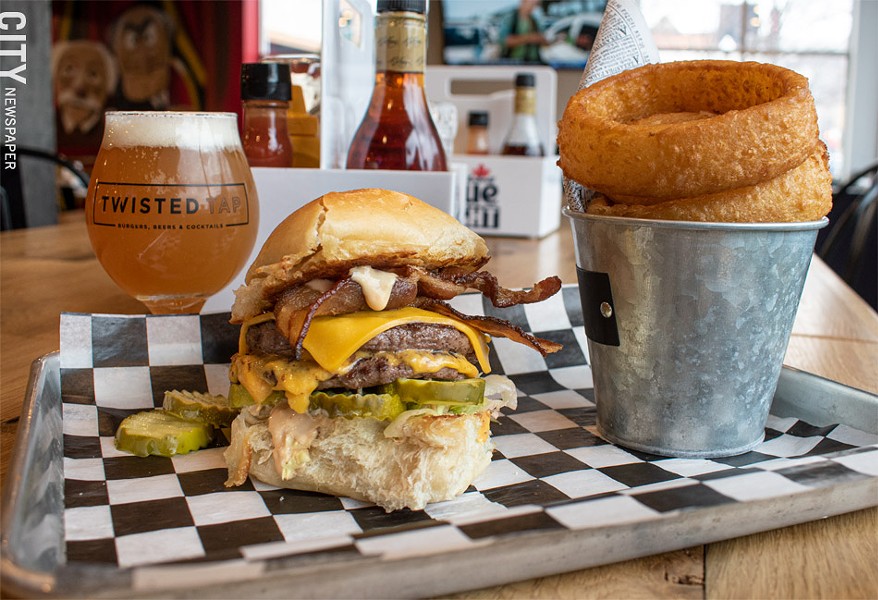 There's a wall of high-def LCDs above the bar, and the sound system can make it seem like the announcers are in the room with you. It's much brighter than Matthew's used to be -- the walls that don't have televisions mounted to them are bright cream, and murals by local artist RANGE (FUA Krew) break up the monotony of the alabaster hue. I couldn't help but notice that the space seemed much more open than its predecessor. The folks at Twisted Tap opened up a wall that divides the bar and the dining area, so there is more of a communal feel to the restaurant. Additionally, they pushed the far wall back, and there is a pair of electronic dart boards occupying the new additional space.

Manager Clark Bovee said that they had been working on renovating the space for Twisted Tap for six months. In fact, they were so fresh on that soft opening that they had not yet had a chance to print official menus. The bartender handed me a small menu with handwritten options. The food looked good, but she suggested I come on their "Friends and Family" night, which I happily obliged, but not before having a light IPA.

Friends and Family night was as packed as game night. This time they were armed with finalized menus: a page of quality pub fare, but with a twist. The bruschetta ($9) is as one would expect: toasted ciabatta topped with marinated tomato salad, and balsamic glaze drizzled across it, but it also has shavings of prosciutto and goat cheese crumbled on top. A variety of angus beef burgers range in price from $9 to $12. If beef is not your thing, the burgers can be made with a house-made falafel patty. No matter what, your sandwich will be huge. I enjoyed seeing people struggle to stuff their faces with the generous amount of food they received.

No sports bar on East Avenue is worth its salt if it doesn't have wings, and Twisted Tap delivers with 10 wings for $11, with your choice of seven different sauces (from traditional Buffalo to Mango Habanero or Korean BBQ). The same sauces are offered for the fried cauliflower ($10) for the vegetarians. I ordered the crispy chicken sandwich ($10.50), because I am a sucker for good, hearty fried chicken. What came out was a delicious mound of crispy chicken tenders atop some leaves of lettuce, sweet pickles, and Korean BBQ sauce, all encased in a toasted hard roll.

I'm glad that I decided to take the scenic route home on Packers night, and that Twisted Tap has occupied the space as a new and hopefully more permanent bookend to the block. It feels like the East End is complete again.