Something I miss from my childhood is posse cuts: two or three (or six) hip-hop groups coming together to form supergroups that would record long songs. These defined my early- to mid-1990s. Think "We Are the World," but actually good. They were like audio Avengers. My high school and college earphones were perennially flooded with verses by Native Tongues, Hieroglyphics, Flipmode Squad, and Juice Crew. If the song title was followed by "featuring [insert two or three extra artists]," then I needed to possess it. The more, the merrier. It takes a great producer to get five or more artists with completely different cadences and voices to properly meld together for an album, yet still maintain their individuality, and for it to sound effortless. For anyone who will claim that their lack of hip-hop knowledge prevents them from making a connection to what I am saying: trust me, you can. The Traveling Wilburys was also a posse, and every one of their songs was audio gold.

What on earth does any of this have to do with food or restaurants? Michael Kiyoshi Goode, the owner of Alexander Street's Roc City Ramen (formerly Brooklyn Ramen), opened a second location on Exchange Boulevard in Corn Hill. And at this new spot, he's permanently featuring Rochester's popular pop-up sushi venue, Adam Hamilton's Poké Sushi. On the surface, this may not seem like a big deal since both ramen and sushi are Japanese cuisine. While that is true, they are completely different types of fare under the same roof, forming a culinary symphony. 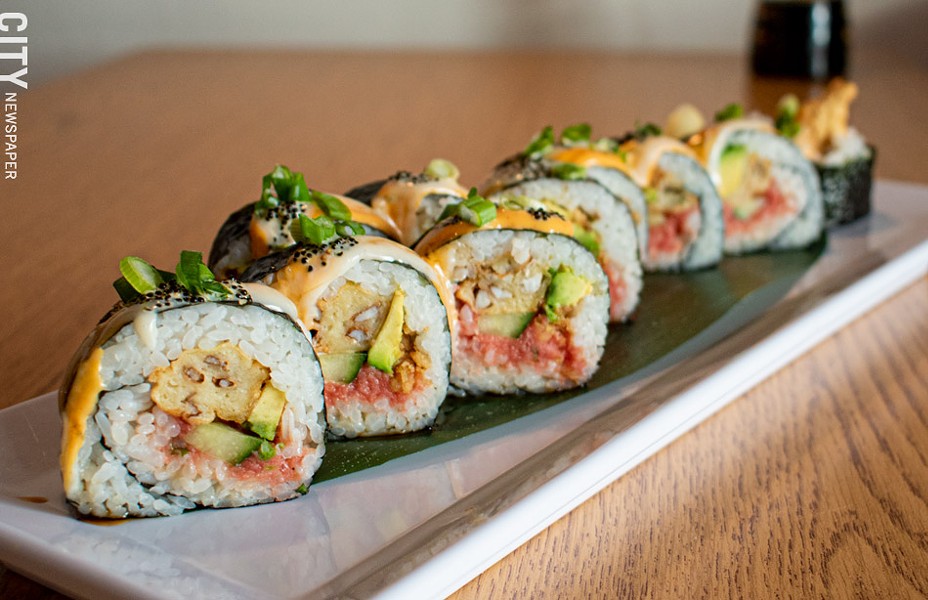 The ramen at Roc City is still as abundant as it was at Alexander Street, with noodles cooked just right in broths that complement the respective dishes' main protein. The Shio ($11.25) is pork medallions and seaweed accompanied by fried onions, sesame seeds, and radishes, all swimming in a small sea of clear chicken broth. Noodles flow in abundance in the bottom of the bowl like a bed of savory kelp on an ocean floor.

For the meat-free, the Vegan Miso ($10.25) is a cloudy, creamy broth that masks the berg of noodles, corn, bamboo shoots, sprouts, and mushrooms. And there are three other ramen choices and a menu that offers gyozas (fried dumplings), curries, and rice dishes, so there's a food scenario for anyone's palate. Goode has always been an enthusiastic chef, and he has maintained that positive energy at the Exchange location, where he greets everyone with an ear-to-ear smile.

Poké Sushi has existed as a pop-up for two years. Hamilton was inspired to open in that capacity while he was working at Ox & Stone and had an itch to strike out on his own. He guest-hosted a light kitchen takeover at Roc Brewing Company. From there, he bought himself a sushi block and display refrigerator, and Poké Sushi was born.

My first experience with Poké was at The Hideaway on Park Avenue, where Hamilton hosts a weekly pop-up every Wednesday from 7 to 11 p.m., offering a small menu that features his most popular specialty creations. The Black Mamba ($16) is a delicious blend of soft shell crab, cucumber, and black tobiko, topped with eel sauce, scallions, spicy mayo, and more tobiko. The crispy onions in the center give a savory-sweet crunch to the roll.

Because I'm a sucker for a decent rockabilly food pun, I also ordered the Johnny Cashew ($13), a roll that consists of smoked salmon, steamed shrimp, cashew butter, and cucumber, and then topped with avocado, eel sauce, and sprinkled with black sesame and scallions. I ate both rolls like a monster.

Both of these rolls are available at Poké Sushi in Roc City Ramen's Exchange location. And with the assistance of Hamilton's intrepid sous chef, Brenda Perkins, he has expanded his menu to feature all of his specialty creations in addition to classic sushi and sashimi items, poké bowls, and hearty dinner and lunch specials. Also -- I'm not sure if I was just lucky or if this is the norm -- but both times I visited Roc City Ramen last week, '80s pop tunes floated in the air. There's something fitting about eating things from the sea while Billy Ocean is playing in the background. I was okay with the whole scenario.

Roc City Ramen and Poké Sushi will likely be a new staple of the Corn Hill area. The combined restaurant is a great place to enjoy a quiet night or to bring your buddies and feast on Goode and Hamilton's creations.