A meal made with love on Lyell

Every once in a while, I want to go home and get spoiled by my Italian uncle and auntie, who like to treat me to a big meal made with all the love and care that they would shower upon me if I were their own son. There is only one problem: according to my genealogy test, I’m not Italian in the least, and I don’t really have any family, so I don’t have any aunties or uncles who would do this for me. Fortunately, Jimmy Paulino and his fiancé Tina Utz have opened Paulino’s Italian Restaurant on Lyell Avenue, right on 390 and Lyell. I can get there three ways from my house, each of them a mere 10-minute drive. A bonus feature is that I can have a nice dry whiskey with my meal at Paulino’s. I recently sat down with Jimmy Paulino to talk about his restaurant, as well as his longstanding love for cooking.

I had arrived at the restaurant at the tail end of the lunch rush, so there was a lot of movement in the dining area, but it was pretty calm as folks were winding down and paying their tabs. Paulino was busy in the kitchen at the time, so I took my seat in a corner booth and sipped on the glass of whiskey the server brought over and took in my surroundings.

The interior of Paulino’s is pretty dark, but strings of hanging lights draped from the ceiling illuminate the main dining room. A vine-covered wood lattice wall separates this area from a huge, well stocked bar. The ambiance of the room made me feel like I was sitting under the stars in the outdoor bar of a family bistro. To the left of the bar is a second, cozier dining area that is perfect for a more intimate date or a private party. This was the perfect way to enjoy the precursor to another winter storm in Rochester. 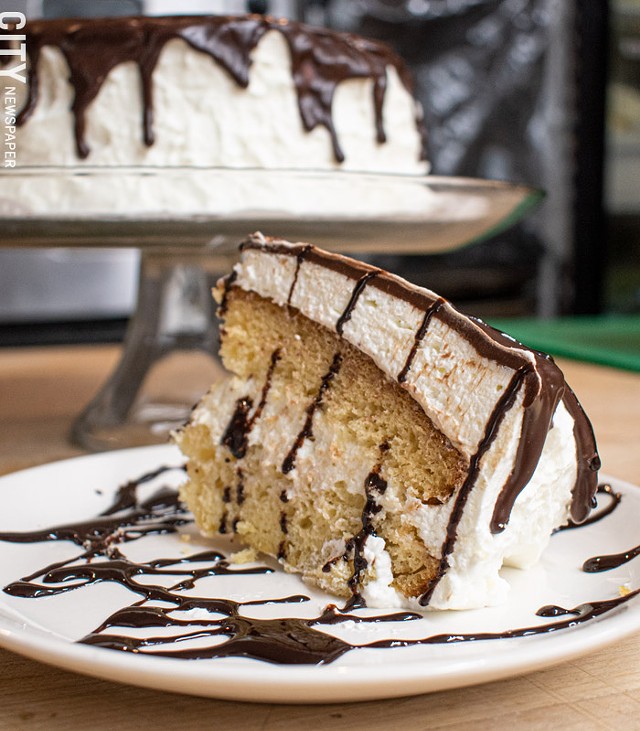 A few minutes later, Paulino came out of the kitchen and greeted me with one of those handshakes that start wide-armed, so I wasn’t sure if this was a hugging establishment or not. Despite the initial awkwardness, he was happy to chat, so we sat down and started talking as the food came out. Paulino started cooking at home when he was 15, learning from his aunts. Full of energy and confidence at around 17 or 18, he moved to Las Vegas to make a name for himself as a chef. He says that by age 23, he was the youngest certified chef in Las Vegas. But he got tired of the pace of Vegas and moved back to Rochester, where he opened a little restaurant called Paisano’s. He has since worked in and headed kitchens all over town; the latest before opening Paulino’s was Roncone’s, a Lyell Avenue staple that had been in business for more than 80 years. 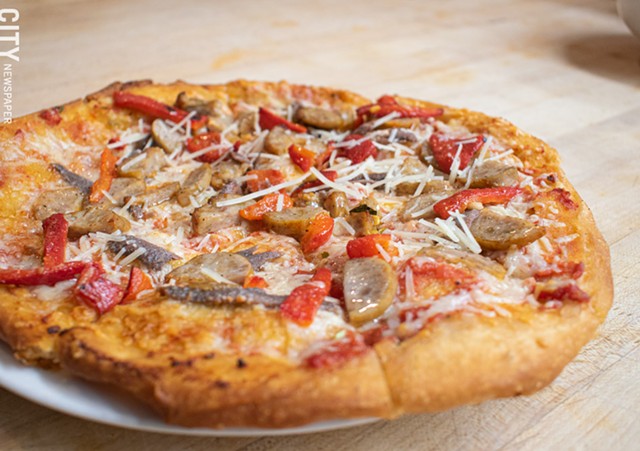 When Roncone’s closed, Paulino wanted to open up his new restaurant in the space previously occupied by Stoney’s Family Restaurant. It took fourth months to complete major renovations, giving the place the feel of an Italian village bistro, with a villa space for big parties.  Appearance is only part of Paulino’s charm. It’s a family-owned restaurant, and the camaraderie among Paulino and his nephews is enjoyable to witness. And when he comes around to your table to ask how you like the food, he takes your words to heart, because he wants folks to be happy and full. His philosophy is, “I love to cook, and I cook with love.”

The love could be felt in the complimentary bread. The loaves are baked on site, and the dipping sauce is not just some olive oil and dried basil. The oil is mixed with crushed sun dried tomatoes, Kalamata olives, fresh basil, and nine more ingredients. I didn’t press for the recipe; a chef deserves his secrets. I just enjoyed the zesty taste of the oil, which I promptly used on my escarole appetizer ($8.95) as well — not that it needed any augmentation. The escarole came out steaming hot and mixed with huge, sliced olives, fresh garlic, and a dusting of breadcrumbs.

I could have stopped there and been happy, but I had to try the eggplant parmesan ($9.95). The slabs of eggplant are battered and breaded upon ordering, not prepped and frozen, and the difference is evident. Though breaded, the dish was light in taste, and not overly oily. It’s served on a bed of ziti pasta with a tangy marinara sauce poured over it. Paulino suggested that I also try a sample of the gnocchi ($15.95), which nearly melted in my mouth. The gnocchi is also made in-house with potato and ricotta cheese, a recipe from Paulino’s aunt. It amazes me that something with such heavy ingredients can taste so light and fluffy, but they pulled it off.

At the end of a hearty, affordable meal, I shook Jimmy Paulino’s hand and got a hug. So this isn’t exactly like my imaginary Italian uncle’s dining room. It’s much better.