PHOTO BY RYAN WILLIAMSON Zack Mikida worked with SCN Hospitality to open Bitter Honey on Railroad Street. In his hand is the Banana Hammock, which mixes blanco tequila, banana cordial, lime, and habanero. 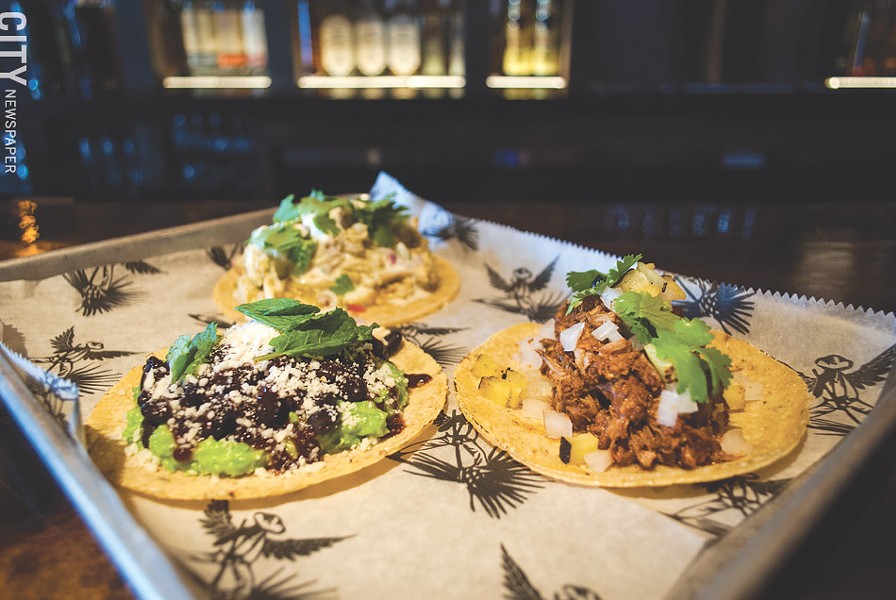 Zack Mikida's enthusiasm is contagious. On the day we sat down to talk, everyone who walked into Bitter Honey (127 Railroad Street), Mikida's new venture with SCN Hospitality (The Revelry, Branca), whether it was an employee or a customer, was greeted with a high five or a hug.

Bitter Honey has been a long time coming. The concept was dreamed up nearly five years ago, and to have it finally come to fruition means that Mikida is all smiles.

The dream began with Mikida's first trip to Mexico, where, he says, he was bowled over by the people, the food, and the drink. "Being someone that has been working in food and beverage since I was 16, I've never seen such genuine and true hospitality," he says. Over the past year, Mikida returned to Mexico six times, staying anywhere from 48 hours to more than three weeks. While there, he worked at a small cocktail bar, soaked up the local culture, and also helped in the fields to produce mezcal.

It was during a trip to one of the oldest tequila distilleries in Mexico that the restaurant got the name "Bitter Honey." When the agave plant is extracted and prepared for production, it is typically cut in half and placed in an oven to begin to cook off, at which point it begins to secret an oil that the locals call the "bitter honey."

Tequila and mezcal are featured heavily in Bitter Honey's bar program, and the restaurant will soon offer a passport program in which guests can sample 50 different types of tequila and 50 different types of mezcal. Each participant will receive a hand-crafted clay cup called a copita and a booklet where they can mark which varieties they have tried and enjoyed.

The food program at Bitter Honey is helmed by executive chef Bennett Hallenbeck. The menu consists of tacos, enchiladas, taquitos, and more. All the corn tortillas are made in-house, and the staff is making close to a thousand of them per day on the weekends. The barbacoa tacos ($6 per taco) include braised lamb, salsa borracha (typically made with chiles, orange juice, tequila, and garlic), avocado, and mint. Plenty of vegetarian items are also available, from the guacamole ($11) and salsa flight ($12.50) on the appetizer menu to the quesadillas ($12) that are made with Oaxaca cheese and salsa.

"I think the idea of true hospitality starts with the awareness of your guests and empathy in action," says Mikida. "It's as simple as that: 'Hey, I see you; I hope you have a good day."

Bitter Honey is located at 127 Railroad Street, and is open Monday through Thursday from 5 p.m. to 9 p.m., Friday and Saturday from 11:30 a.m. to 2:30 p.m. and 5 p.m. to 11 p.m. It is open for lunch and dinner on Friday and brunch and dinner on Saturday. 270-4202. Free parking is available in the lot directly across the street from the restaurant. bitterhoneyroc.com

The Cub Room (739 South Clinton Avenue) and Black Button Distilling will co-host The Black Room Halloween Party at The Cub Room on Friday, October 13, from 7 p.m. to midnight to debut the Black Shadow Vodka. Exclusive craft cocktails will be available at the event, and a costume contest will take place with prizes and giveaways. The first 50 guests will receive a Bourbon Cream Gift Bag.

OSB Ciderworks (5901 Big Tree Road, Lakeville) will host a Fall Fling & Cider Release Party on Saturday, October 21, from noon to 9 p.m. The cidery will debut its fall selection of ciders, including Hold the Crust Apple Pie, Peardon Me, and a new flavor to be announced. The event is family friendly and Corning artist Elijah Smith will set up a glass pumpkin patch. Cider and donuts will also be available.

Genesee Brew House (25 Cataract Street) will host a Beer Pairing Dinner on Tuesday, October 24, from 6:30 to 8:30 p.m. Tickets are $45 per person and will include a four-course meal and beer pairing. On the menu will be pumpkin soup with fried pumpkin seeds, a homemade pretzel with smoked gouda beer cheese, stuffed pork tenderloin with apple-cranberry stuffing, and a homemade waffle cone with Reisky Spies ice cream for dessert. Purchase tickets at eventbrite.com/e/beer-pairing-dinner-tickets-38413940129.

Sakura Home Japanese Restaurant (2775 Monroe Avenue) has expanded to include a Chinese Cuisine Dining Room. The restaurant is offering a $10 gift card for every $50 spent at the new dining room, which is open for lunch and dinner. More information: sakurahomerestaurant.com for more information.