I lived in Cyprus for two years in my early 20s. A quick side note: as I've had to explain multiple times to my family and friends, Cyprus is not in Greece. The southern part of the island is Greek speaking, and the people who live there have direct Hellenic roots, but Cyprus is its own country, independent of Greece.

Greek culture in Cyprus is prevalent, though. Generations of families build their houses next to each other, so that elders can help their progeny as they start their independent lives, and so that progeny can take care of their elders as the get closer to their final chapters.

The skies are deep blue all the time, untouched by smog, and uninterrupted by jagged metal and concrete skyscrapers. The sun seems to hang low and makes much of the land arid, but it never feels too hot or dry anywhere. Millennia-old tapestries and sculptures are immortalized in elaborate replicas, ubiquitous in homes and businesses. The aroma of Mediterranean Sea air wafts hundreds of meters inland from the shore.

A meal at a local restaurant is like entering mama's kitchen, where you can see, hear, and smell her working magic with her ingredients, ready to give you immense portions of the freshest seafood, usually caught just hours before you entered the venue. Cyprus was a good time. I got to revisit my old, temporary home when I visited Kainos Restaurant recently. Owner Jeff Scott's goal of transporting patrons was accomplished; the mini-Mediterranean escape can serve as a nice respite from Rochester's howling winter winds.

Located at Corn Hill Landing, Kainos offers authentic Greek fine dining with some American influence. The second you pass the vestibule, you can see how much effort Scott put into the décor, which he hand-picked in Greece. Two statues stand beside marble stairs, one of Poseidon and one Venus de Milo (I know Venus is Roman, not Greek, but her counterpart is Aphrodite, so calm down). Upon climbing the stairs and passing two marble pillars, an illuminated wall-sized tapestry of Zeus adorns the far wall behind the marble bar. In some of the ceiling nooks are depictions of others deities from the pantheon.

To the right is a bar that serves Greek coffee and frappes, which are summer mainstays of mine when heading to the beach. Additionally, the food is sourced from Greece. Scott gets an order of seafood three times a week, so fresh that is smells like the Mediterranean. He visited the farm that supplies his olive oil. All of the wine is from Greece. The feta and other cheeses come in on pallets every week, ready for their service to our taste buds. The only exception is the gyro meat, which he gets from Astoria, Queens, AKA "little Greece."

Instead of putting it on the vertical rotating skewer that most people are accustomed to seeing, Scott prepares the gyro meat by roasting it horizontally on a skewer over a flame, constantly taking the juices that fall from it and drizzling them on the meat so that is doesn't dry out and keeps all of its flavor.

The menu yields a perfect depiction of Greek culinary life. The souvlakis and salads are made for those of us with healthy appetites, and the abundance of offered seafood dishes made me happy. I started with something I hadn't had in over 15 years: the saganaki appetizer ($12). This is kefalograviera cheese sautéed in brandy and lemon, set ablaze before your eyes, and served with pita. The cheese of choice is a blend of kefalotyri and graviera cheeses, so it was a bit different from the saganaki I've had, made with just kefalotyri. It's much better. Kefalotyri can be a little bit too salty, but the graviera smooths out and somewhat sweetens the flavor. Also there is nothing like watching someone set a platter on fire at your table. 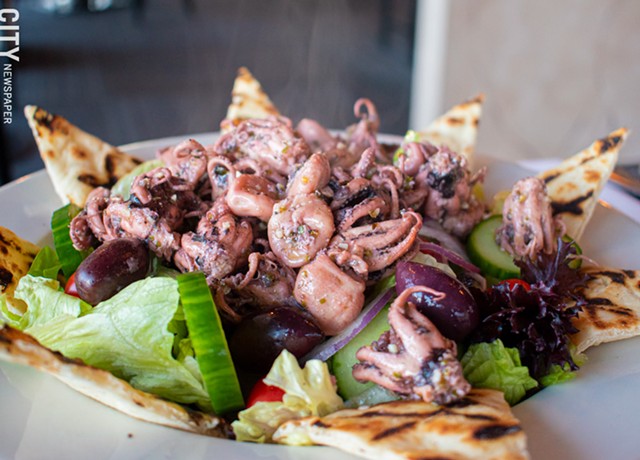 I agonized over my main course choice, because I had perused the lunch menu the previous day, ready to order the Athena Blueberry Salad ($12). But I was there for dinner, and the Poseidon ($35) looked delicious. Scott was gracious enough to split the difference: I got a smaller version of the salad to sample, for journalistic purposes, as well as a full order of the Poseidon. The Athena Blueberry salad is a mix of arugula and spinach with grape tomatoes, pine nuts, sliced avocado, cucumbers, and blueberries, tossed with a house-made blueberry vinaigrette and topped with shaved Asiago cheese. This will be my summer staple. It was light and tangy and filling all at the same time. All of Kainos's dressings are made upon ordering; there isn't a tub of blueberry dressing sitting stagnant in the kitchen. I could smell the freshly crushed blueberries as I poured the dressing over the greens.

The Poseidon is a mariner's dream catch: shrimp, scallops, lobster, crab, calamari, and mussels sautéed with sun dried tomatoes, roasted red peppers, and artichoke hearts in a lemon garlic sauce, served on a bed of spinach rice. What came out was a mountain of food. Every meat in my dish was tender, almost to the point of melting in my mouth. It takes great skill to cook a blend of shellfish like that to such perfection without one or two coming out a little bit rubbery, but every bite was Elysian. Try as I might, I couldn't finish it all. On a positive note, though, I had seafood for breakfast the next day! Food that fresh reheats quite well.