A gym for people who feel uncomfortable at "the gym"

Six years ago, Christine Walker had never met a person like her romantic and business partner, Lore McSpadden. Not just in the lovestruck sense, but also in the literal sense. McSpadden is transgender and non-binary, a person whose gender cannot be described simply as "male" or "female."

Walker, 39, said she knew "that trans folks existed," but her understanding of them was purely theoretical. "I didn't even have to think about it, because of my privilege," Walker said. "I was born into a body that matches my gender."

Their path to a romantic and business relationship was anything but straightforward. It was a meandering and confusing route that took six years to complete.

In the process, Walker's brother came out. She questioned her understanding of gender and sexuality. She worked through a family history of addiction. She found and lost respite in gyms and exercise. 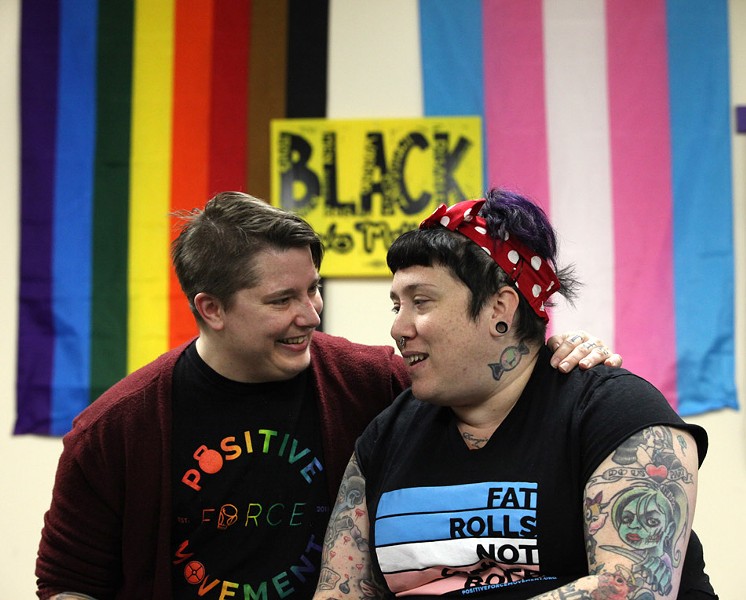 "I started running. I started running a lot," she said. "It's kind of what addicts do. We replace one high with another. You get an endorphin rush, and it's — it's a big part of how you stay sober."

But Walker didn't feel comfortable at the gyms she was using.

"I'm a fat queer person," she said. "And I realized that fat queer people don't belong at most gyms. We're not welcome. That space is not for us."

Walker and McSpadden found other flaws with the way gyms are set up in the Rochester area, they said. "They were supposed to be inclusive, but they were not," Walker said.

This spring, they opened Positive Force Movement, an exercise and wellness space near the corner of Blossom and Winton roads that aims to welcome people who feel out of place in traditional gyms.

"A lot of trans folks are terrified to even walk in the front door" at most gyms, Walker said. "And I hate to say it, but that's fair. They're accosted every day for just existing."

She pointed to a practice of most gyms in which new members are required to select a sex upon arrival, either on their application forms or as they're invited to tour locker rooms labeled "men" and "women."

That approach, she said, leaves no room for people outside the gender binary, or whose gender doesn't match their appearance, and fosters an environment that could be unsettling at best, and, at worst, dangerous.

Their decision to create a safe space for non-binary people led them to realize they could broaden the scope of such protections.

"We can offer this for trans folks, for queer folks, fat folks, black folks, all people of color. People who are deaf, people who are disabled," Walker said. "We went on and on and figured out how to do it well, because we had to. Because it's needed."

By all accounts, it's working.

Since they moved into the building, their space has more than doubled. They've expanded from one room to three, and they now have dedicated areas for individual movement, group sessions, and restorative practices, like therapy and meditation. McSpadden estimated the facility accommodates between 80 and 100 hours of personal training sessions a week, and that as many as 25 people a week attend at least one class.

"It's all through crowd funding," Walker said. "We are literally created by our community."

Sites like Positive Force Movement have begun to surface across the country only recently.

A gym in Oakland, California, that bills itself as the nation's first LGBTQ gym was created in 2016. A "Queer Gym" in Boston that popped up last year advertises as a workout space "explicitly for LGBTQ folks."

Members of Positive Force Movement say there's nothing like it in the Rochester area.

"I feel so uncomfortable in certain highly gender-segregated situations and with conventional gender roles" typical of most gyms, Angela Hakkila said in between sips of water after a dance class.

Hakkila, whose pronoun is "they," pointed to a sign on the wall.

"Here, written on the wall, it says, 'We honor and use all folks' correct pronouns,'" they said. "Just knowing that there's a space where people aren't going to assume things about you in terms of how they assess your body and what they expect it means about your personality, is huge.

"I'm so grateful to have a space where I can dance and feel that support at the same time."

Rio Sherry, a trans man who began using masculine pronouns in the last few years, said no one particularly cares about his gender identity or what his body looks like at Positive Force Movement. He said that was an exception in his experience.

"I've been harassed in bathrooms many times. I've been threatened. People have tried to kick me out," he said.

He recalled one incident, elsewhere, in which a man physically barred him from entering the bathroom. "I tried to open the door, and he slammed it on me," Sherry said. "I got in there, and he was banging on the door."

Sherry has scars on his chest from top surgery, a feature that has left him feeling self-conscious at other gyms. "People sometimes stare — might even say things about me," he said. "But here, everyone belongs. Nobody's staring."

Neither the Rochester YMCA, where Sherry said he had worked out in the past, nor two other local gyms contacted for this story answered specific questions about their policies around inclusion and transgender gym members in particular.

The YMCA offered a prepared statement from Chief Operating Officer Kevin Fitzpatrick calling inclusion one of its "core values."

"We work every day to create an environment where everyone — regardless of age, race, religion, gender, identity or sexual orientation — feels welcome at all of our facilities," Fitzpatrick said.

Walker said no matter the intent of other fitness facilities, people are left out.

"We take the word 'regardless' out of there," she said. "Once you think you've arrived — that you're being inclusive of everyone — you've failed somewhere."

At a time when other gyms are facing lawsuits over their policies on inclusion and sexual identification, Walker and McSpadden acknowledged their own shortcomings and blind spots. As their facility has grown, they said, they've made efforts to accommodate needs they realized they were missing.

"We always talk. We ask people, 'What are things that are triggers for you? What do we need to watch out for,'" McSpadden said.

In an evening restorative yoga class, for instance, instructor Sarah Yannello softly asked participants for their consent to turn on a fan, turn off the lights, and close the door. She murmured reassurances as she urged her students to close their eyes.

"Some people are really not comfortable with any of those things," she said. "We don't always realize we have trauma in our lives until something triggers it. It's important to let people know that this is a safe space."

Yannello said triggers can range from the highly specific and acutely traumatizing, to the generalized and diffuse. "Maybe, in their childhood, a person was shut in a closet accidentally," she said. "They don't remember it, but all of a sudden, now, this closed door doesn't feel safe." 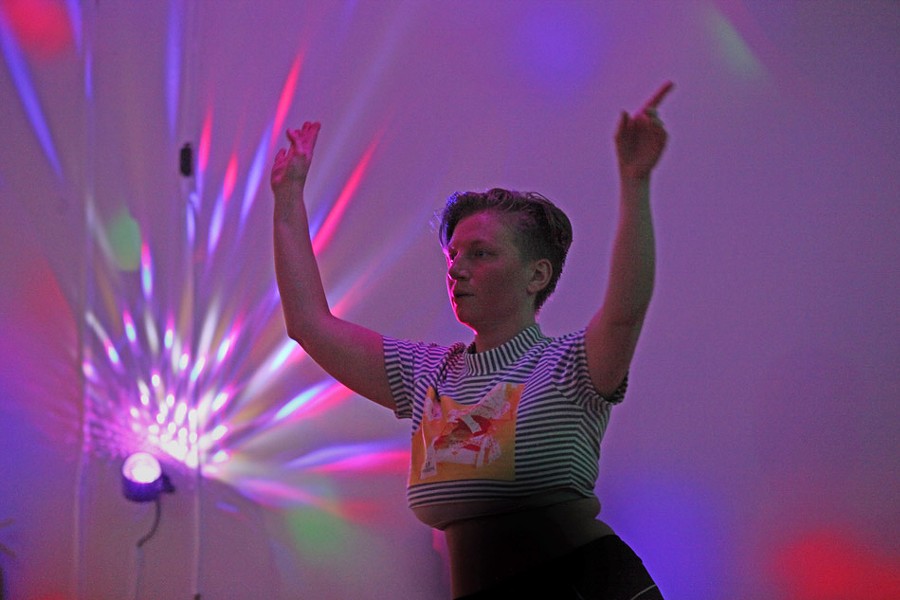 Addressing trauma is particularly important for the clients Walker and McSpadden serve, because they are susceptible to both physical and psychological harm.

A survey of more than 120,000 American adolescents found that roughly 40 percent of those who identified as transgender said they had attempted suicide. Studies have found that health care providers lack knowledge about how best to care for gay and transgender patients and, in some cases, have refused to treat them.

Even when things go right, staying healthy and fit can be challenging.

The long-term effects of chest binding remain poorly understood, and little medical literature exists to inform physicians. But the practice has been known to cause health concerns, including breathing issues and damage to breast tissue, and there is a growing awareness in the trans community of how binding and top surgery affect exercise and fitness.

Part of creating a fitness community welcoming to transgender people, Walker said, means acknowledging how their exercise might need to change.

The body can't move the same way in a binding that it can unbound. Motions that were second nature before top surgery might be painful during recovery.

McSpadden, who has bent steel bars into sculptures using only their own strength and body as leverage, had the surgery less than a month ago. 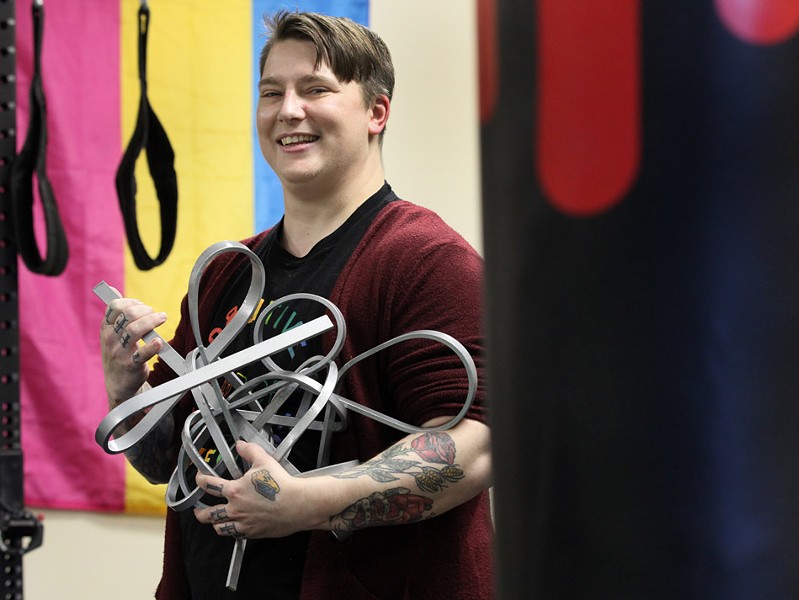 "What I had known through research, I am now living," they said.

Moving during a recovery, especially from top surgery, is "always about finding the right balance," McSpadden said. How do we prompt the strengthening or mobilizing effect that we want without aggravating the healing that's going on?"

Accordingly, instructors look for ways to offer fitness classes for people whose motions are restricted.

As Leonte Paul led a relentlessly energetic Zumba class, she hopped and sprang and kicked her legs to the music. So did most of her students.

But in the back of the room, Coriander Rainbeaux, whose pronoun is "they," was dancing in a chair. "I'm getting ready to maybe stand up once in a while," they said. "I have fibromyalgia and chronic fatigue, and just being able to work at my own pace and increase my own health, it's been huge."

Rainbeaux said Paul helped them adapt dance movements to make the class approachable for a person who typically participates from a seated position.

Paul brushed off any questions of difficulty in accommodating a sundry set of students.

"I make it the happy hour, honey. I make it so that it's your workout," she said, punching up the volume on the word "your."

Paul teaches dance classes at several other spaces around Rochester, but she said the one at Positive Force Movement is special.

"This is where, at least for a little while, you are not ostracized," she said. "You are the hottest person in the room."

Brett Dahlberg is a health reporter at WXXI News, a media partner of CITY. He can be reached at bdahlberg@wxxi.org.