A different type of Southern style

I often make the blanket statement that I like Indian food without much thought. But India is as large and diverse as the United States. Different regions have different palates, flavors, and culinary styles. If I say I like barbecue, the next question would be whether I like South Carolina, Georgia, or Texas style. If I'm into pizza, am I thinking of traditional, New York, California, or Chicago? (Truthfully, it's never Chicago. That is just a bread bowl of tomato soup with cheese.)

A lot of the Indian food offered in Rochester is from the northern regions of India, which is delicious, but what about South India styles? Enter Hyderabad Biryani House, a new Indian restaurant in Henrietta Plaza, next to Hallmark and Starbucks. The restaurant is named after the city of Hyderabad, capital of the state of Telangana, a mid-southern region of India, and is also the city that owners Ravi and Bhargari Godavarthi are from.

This is their second restaurant venture; the first Hyderabad Biryani House opened in Buffalo in 2016. Before the Rochester location opened in June, folks living here would travel the hour for the Godavarthis' food. Some were homesick for the southern style cooking, and some just wanted to try something new. 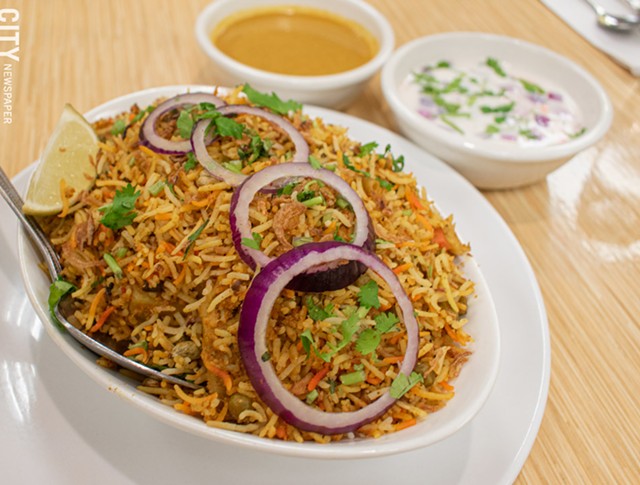 I visited Hyderabad Biryani house in the early afternoon, just after regular lunch time. Its sign is easy to spot in the plaza, with its bright red lettering -- the standard strip mall font that many restaurants use, usually as required by their lease. But the sign belies the aesthetic of the interior. Though it was daytime, the interior was dark, and I felt like I was out for a night on the town. The walls are burnt yellow giving way to deep auburn moldings and trim, and the hosting and dining areas are separated by a low wall, which gives the feeling of being allowed into an exclusive club when the host takes you to your seat.

The far wall of the dining area is lined with long booth-style seating, and there are plenty of tables in the middle for lunch and dinner rushes. Sliding pocket doors hid another area of seating for busier times or reservations by large parties. Colorful paintings of peacocks and a woman dancing among vibrantly colored textiles adorned one wall. On another, an LCD television was displaying the music videos that were softly serenading the whole restaurant. Normally, I am not big on televisions in restaurants and bars, but the way it was set in on the one natural wood paneled wall made it look like another painting that happened to have a moving picture. Though the videos were bright and colorful and full of action, the screen contributed more than distracted from the décor.

Hyderabad's menu is quite vast. I could fill up on just the appetizer choices. I was familiar with some items, such as the samosas (fried pastry dough filled with minced potatoes and peas, $4.99) and pakodas (paneer bars deep fried in chickpea batter, $8.99), but I had not heard of the bajji or the manchuria. The former are different deep-fried vegetables dipped in chickpea batter; the aloo bajji are potato ($6.99) and mirchi bajji are chili pepper stuffed with chopped tomatoes and onions ($7.99). The manchuria -- which come in gobi (cauliflower, $9.99), baby corn ($10.99), and mixed vegetable ($10.99) -- are battered in a spicy sauce and tossed with a house recipe Manchurian sauce.

Looking at all the options, I realized that my mouth was watering, yet I had not even read past the appetizers. On the specifically South Indian menu are dosas, lentil and rice crepes stuffed with specific fillings. There are about a dozen variations (all $8.99), including ghee, onion rava, cheese, and even a chocolate dosa. With exception of the chocolate variety, they all come with sambar and coconut chutney for dipping.

It took me quite a few minutes and consumption of about half of my Masala tea to decide on a main dish. I'd be remiss if I went to a place called "Hyderabad Biryani House" and didn't try the dish in their name. Biryani is a fragrantly spiced dish of basmati rice and herbs served with raitha yogurt sauce and a chili pepper or peanut gravy. Hyderabad offers eight different options of protein: the perennial favorite chicken (made with chicken leg quarters), vijayawada (boneless chicken), goat, shrimp, fish, egg, vegetable and paneer. I decided to go with the vegetable ($11.99), because I thought that would be "eating light."

I was wrong. Within minutes, I was presented with a mountain of aromatic rice burying a plate of perfectly spiced and cooked vegetables. This was a hearty meal, but it was hard to put down my fork after the first bite. The vegetable biryani has a smoky-sweet flavor due to the whole anise and cloves cooked in. And the folks at Hyderabad are not shy about spice. I went for medium, and it was hot enough for my brow to conjure a few beads of sweat. I like spice, so this is precisely what I wanted out of my meal. If you are not a fan of spicy foods but like international cuisine, I would suggest starting with the mild. 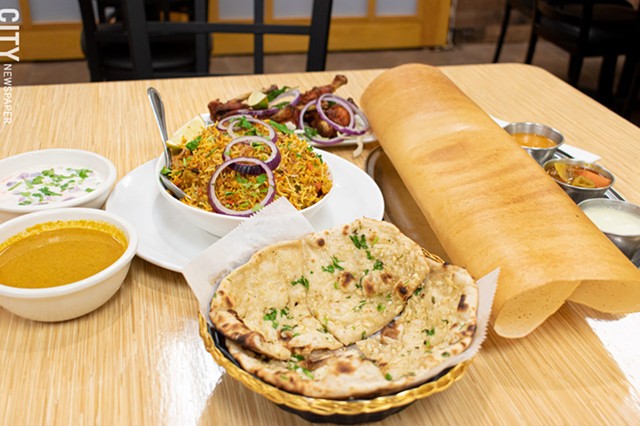 Chris Thompson is a freelance writer for CITY. Feedback on this article can be sent to CITY's arts & entertainment editor at becca@rochester-citynews.com.