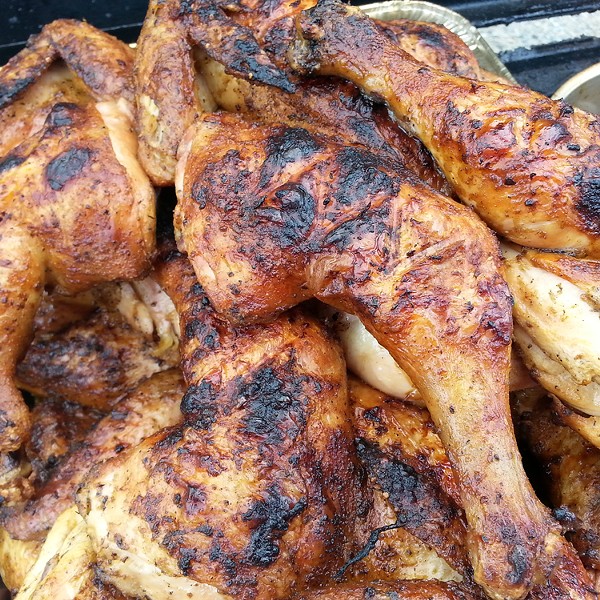 I got a hot tip that there's a new pop-up chicken place in town called Damn Good Chicken. Two things I love are chicken and swear words, so I was already in before I even did any research. I scoured the internet looking for this pop-up event under the name "Damn Good Chicken," but could only find a restaurant in New Jersey that had been closed for a year. Perhaps I heard the news incorrectly.

Rob Derin and Julia Khoury coordinated to make it happen. Derin is the former owner of the popular New Jersey-based eatery Damn Good Chicken. He closed up shop because his wife's family lives here in Rochester, and they wanted to move closer to them. Derin was hired to be head chef at Julia K. Caters, which is owned by Khoury and her brother AJ. Together, they decided to try a pop-up chicken dinner and also get the name "Damn Good Chicken" out there. The inaugural pop-up was hosted at downtown event space Studio 180.

My friend and I sipped on cold beer, awaiting the start of dinner and taking in the surroundings. Fit for a fancy wedding reception, Studio 180 looks like a cross between a renovated gatehouse and the Gatsby mansion -- all rustic elegance. There were long tables all around the room, and nearly all of the seats were filled with folks eager to get their dinner. At the base of twin winding staircases that lead up to more seating was a delicious-looking ice cream sundae station.

Our first course was a basic garden salad with a savory-sweet dressing. As we were nearly finished with our salad, like clockwork, out came a huge bowl of collard greens. Their aroma alone was satisfying enough for me, but their flavor was amazing -- I can only describe it as "your cousin's coveted secret family recipe." A bowl of biscuits and cheddar-jalapeño cornbread came out next. We were encouraged to use the house-made honey butter, but I had already been using the provided spicy honey, which is made by heating honey with sweet sambal and chili sauce and then straining out the pepper seeds. The result is a sweet-hot sauce that goes perfectly on everything. I even threw some in the mac and cheese they brought out, not that the mac and cheese needed any augmentation -- it was creamy and fine on its own.

Our main course came out: a huge plate of chicken accompanied by roasted potatoes, piping hot and sitting in a concoction of olive oil and spices. The chicken was marinated overnight, and then roasted over coals with its own marinade poured over it repeatedly to keep it from drying out. It was then cut into quarters that were cut so precisely, I wondered if Derin has an obsidian blade back there in the kitchen. Even the bones looked to have been cleaved like butter. The chicken itself was so tender, it took little effort to rend the meat from its skeletal frame, and the meat had a distinct smoky-sweet taste.

The Damn Good Chicken Dinner pop-up will be a regular monthly occurrence. The next one will be announced via Julia K. Caters website or social media.