Monday through Sunday, 11 a.m. to midnight

I initially had a little trouble finding Black Bear Pub. It wouldn’t show up on the erstwhile trusty Google Maps, but to be fair, it just opened its doors on November 15. And it’s a little bit farther from the center of the city than many new bars. Located on West Ridge Road, Black Bear Pub is walking distance from Kodak Center, just a few feet from the area’s staple, California Brew Haus. The menu features a variety of pub fare, from wings to pizza and burgers. 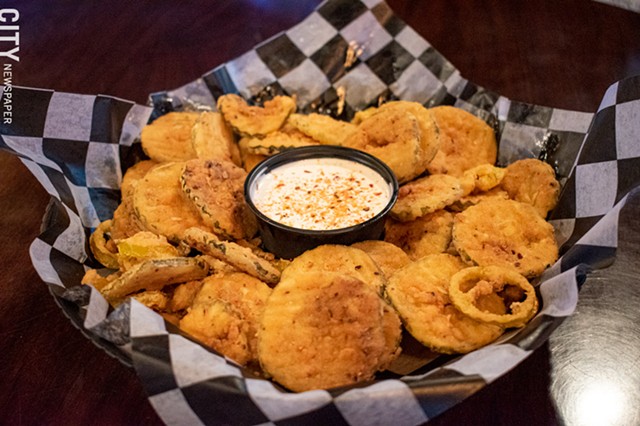 I will level with you: Black Bear Pub is a “bro bar.” But that’s a good thing! “Bro bar” gets thrown around too negatively. People hear the term and think of venues that have an oddly specific dress code, exclude a certain group of people, and are full of jerks hyped up on energy drinks and brown liquor, who are ready to brawl at the brush of a shoulder. But Black Bear Pub is a sports bar where the bartenders treat you like long-lost siblings, where you and friends can discuss your days over a pint and a shared nacho plate while watching a game. Sure, you can do that at many places in the city, but Black Bear Pub is owned and operated by a local artist with a vision. Also, there are so many bears!

Vanessa Sheldon bought the building where Black Bear Pub resides in 2017, shortly after finishing a commission for the Fairport Industry Development Agency. For that project she made a sundial along a walkway of the Erie Canal, constructed from stones salvaged from the original canal construction. Since then, she’s been creating more art and renovating the space, mostly by herself.

This once-booming area has been a bit depressed since Kodak shrank, but it’s ready for a comeback. Many people (including me) have ignored this section of Ridge Road when pursuing night life. But imagine this: a place where there is plenty of free parking, where you can have a decent meal and a brew, and you can still get home within about 10 to 15 minutes. Black Bear Pub has a lot of potential, and the two times I visited before writing this review, it was filled with customers gleefully tapping that potential. And did I mention the bears?

“Oh this is cute,” I thought, when I entered the pub. There’s a stuffed bear in the window with a Santa hat on. ‘Tis the season, after all. I’d wager he’ll have angel wings and heart shaped arrows in February, and a little green hat and a pot of candy gold in March. The dining area and bar combined look quite small, but there was plenty of space for the five groups of people there to belly up to the bar or grab a table comfortably, and there was still space for more folks.

The whole atmosphere is cozy; the wood floor and wall panels make it look like you’re in a log cabin, complete with a large fireplace and brick mantle in the dining area. The color scheme of the painted parts of the wall and ceiling seem to be “flannel.” Deep reds and black tones made the place feel dark, warm, soft, and comfortable. I ordered a pint and perused the menu while chatting with other patrons, as this is the type of place where strangers are friendly.

Even when I eventually went to the facilities, I saw them: there are bears everywhere. There are pictures of bears all over the walls, doing non-bear things. There’s a bear bench-pressing a log of wood. Behind me was a bear squaring up with a lumberjack. Over the entry door is a bear playing beer pong. To the left of the bar is a bear arm wrestling (paw wrestling?). I almost wondered if this was a bar for actual bears. But even more amazing: there was more bar! The darkness and coziness of the front section contrasted with an entire back area housing a skee-ball machine, a dome hockey unit, a pool table, and, of course, more bear pictures. As I looked around this game room, I saw that there was a door leading out to a 1,400-square-foot patio. Black Bear Pub is full of surprises, and I was impressed even before I got my food!

There’s a decent selection on the menu, and they are not stingy with the servings. On my first trip, I ordered a non-conventional pizza, the Country Sweet ($16), which has a Country Sweet sauce base, chopped fried chicken tenders, and cheddar. I expected a personal sized pie, but was presented with a 14-inch sweet, cheesy behemoth, which provided me with leftovers for two meals. I must say, the chicken was as crispy and tender the next day as it was at the bar. The patron next to me ordered the fried pickle appetizer ($8), and he received a veritable bucket of crispy dill medallions interspersed with banana peppers. 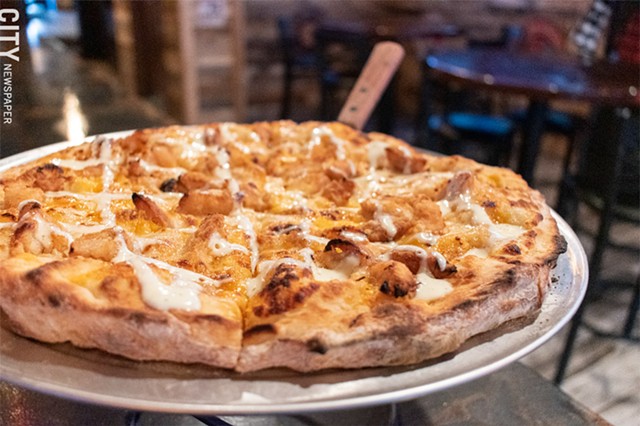 On a second visit two days later, my friend and I ordered the loaded nachos ($10) and added chicken (+$3), and we could have stopped there. I believe that they were the best nachos I have had in the city. The tortillas were buried under tomatoes, olives, cheddar, jalapenos, spicy queso, and chopped onions. Nearly every bite had some well-seasoned chicken. Sheldon has put as much effort into Black Bear’s menu as she did the aesthetic. 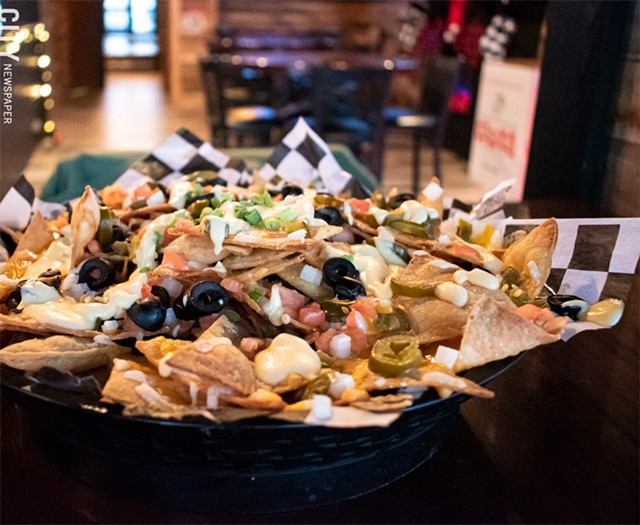 The reason for all the bears and the cabin vibe is that Sheldon is originally from the Adirondacks, so this is a little taste of her old home in her current one. She had hoped to provide a place in the old Kodak area for people from different areas to visit and enjoy, from folks leaving a show at Kodak Center, to people who just wanted a pint and a game of darts. In the spring and summer, she looks forward to hosting musical performances and other events there. I doubt she’ll have much trouble finding an audience; it’s already a perfect place to watch a championship game with friends.
Chris Thompson is a freelance writer for CITY. Feedback on this article can be directed to becca@rochester-citynews.com.