Unsung heroes who left their mark

Rome wasn't built in a day – and neither was Rochester. Our city of 208,000 is known for groundbreaking historical figures: Susan B. Anthony, Frederick Douglass, and George Eastman. But what about the unsung heroes? Those who helped Rochester become what it is today by being the first in their field, daring to dream and working to build a better community.

Before any of its modern nicknames, Rochester was simply "the flour city" in the 19th century, when hundreds of millions of barrels of flour was produced here. And while the city's canal-side locale made it a perfect spot, it was Robert M. Dalzell's innovation that expedited the milling and made Rochester a boomtown. Dalzell, an Irish immigrant, adapted new mechanical techniques for the elevator system so it could function outside the building, lifting wheat from the canal to the top of his mill to begin the grinding process. By the time he retired in 1851, Dalzell had built or overseen the building of 10 of Rochester's 22 major flour mills.

Although Kodak has struggled since the turn of the century, its footprint is forever cemented on this city. But it's not just the company's founders, George Eastman and Henry Strong, who helped build the photography company into a global empire. Domingo Delgado was brought into the company from Puerto Rico by Eastman to run the company's export business. Delgado thrived in the role, showing the magic of photography to people in Central and South America and explaining its benefits in their own language. It proved to be a smart move by Eastman; Delgado helped establish Kodak branches in Argentina, Panama, Colombia, Mexico, and Chile.

Rochester is now known for its cutting-edge medical research and care, so it's only fitting that some of the biggest trailblazers in modern medicine embarked on their careers here. In the late 1800's, a lack of comprehensive and consistent training prompted women, including Ida Jane Anderson, to advocate for the successful passage of the Nurse Practice Act, which established regulated training for Registered Nurses. Anderson was one of three women to graduate from the Rochester Homeopathic Hospital Nurses' Training School to become the first RNs in the country. She spent the next four decades using her medical training to treat victims of the smallpox epidemic of 1902 at Hope Hospital, to become the first social worker at Rochester Homeopathic Hospital (now Genesee Hospital), and to care for patients at Strong Memorial Hospital until she retired.

Like Anderson, Dr. Sarah Adamson Dolley broke into the male-only field of medicine in 1851 by becoming the third woman medical graduate in the country and the first to complete a medical internship. Growing up in a Quaker family in Pennsylvania, she grew interested in medicine after stumbling upon her uncle's medical books. After traveling throughout Europe for additional medical training, Dolley settled in Rochester with her husband, where they ran a practice together. She rebuffed resistance from her male colleagues, going on to be the first president of the Women's Medical Society of New York State and to co-found the Rochester Chapter of the Red Cross. She was a tireless advocate for women's rights – working alongside Susan B. Anthony for women's suffrage and also working to open positions in hospitals to women physicians. 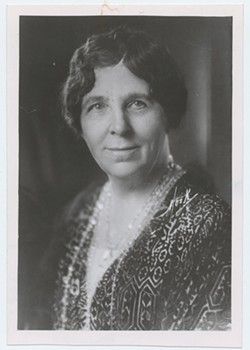 Two of Anthony's less famous allies were instrumental in boosting the quality and equality of education in Rochester. Helen Barrett Montgomery and Edwine Blake Danforth both worked alongside the famous suffragist to petition the University of Rochester to allow women to attend the school. Montgomery, a teacher also took a keen interest in young girls and the poor. Along with Anthony, she formed the Women's Educational and Industrial Union of Rochester, which established a legal aid center, a rest house for working women and safe milk stations for mothers. In 1989, she became the first woman to be elected to the Rochester school board, a position she held for 10 years. She used her tenure to implement a variety of progressive reforms, including the introduction of kindergarten, vocational training, and health education in schools across the city.

Danforth was a tireless advocate for education, serving on the Rochester school board for 11 years, seven as president. But she also had a flare for the arts, and in 1913 was a founding member of the Memorial Art Gallery and helped pioneer the idea of free admission and of classes for artistically gifted children. Danforth also helped start the Landmark Society and donated her home on West Avenue to the city. It is now the Danforth Community Center.

Before there was Frederick Douglass, there was the Reverend Thomas James. Their stories are not only similar, but intersect. Born into slavery, James lost his mother and siblings when he was only 8 years old. As a teen, after a severe beating, he fled to Canada, and later returned to the US and settled in Rochester. Here, he worked at a warehouse and learned to read and write at a church school. In 1830, he built the AME Zion Church in Rochester, where he later ordained Frederick Douglass as a preacher before the beginning of Douglass's public career. James shared Douglass's passion for the abolitionist cause, allowing Douglass to edit his paper, the North Star, from the church's basement. The church also served as a stop on the Underground Railroad, helping slaves escape to a better life.

A better life in America was what Assunta Gala Cantisano and her husband Giovanni had in mind when they left Italy with little money to their names. The couple took root – literally – in Rochester, where they planted a backyard garden and the beginnings of what would become Ragu pasta sauce. The Cantisanos sold jars of the sauce, based on Assunta's family recipe, during the Great Depression to make ends meet. By the 1940's, their saucy operation outgrew their home, and they opened the first Ragu factory in Rochester. In 1969, the Ragu name was sold, and eventually, the Cantisano family left to create Cantisano Foods (now LiDestri Foods).