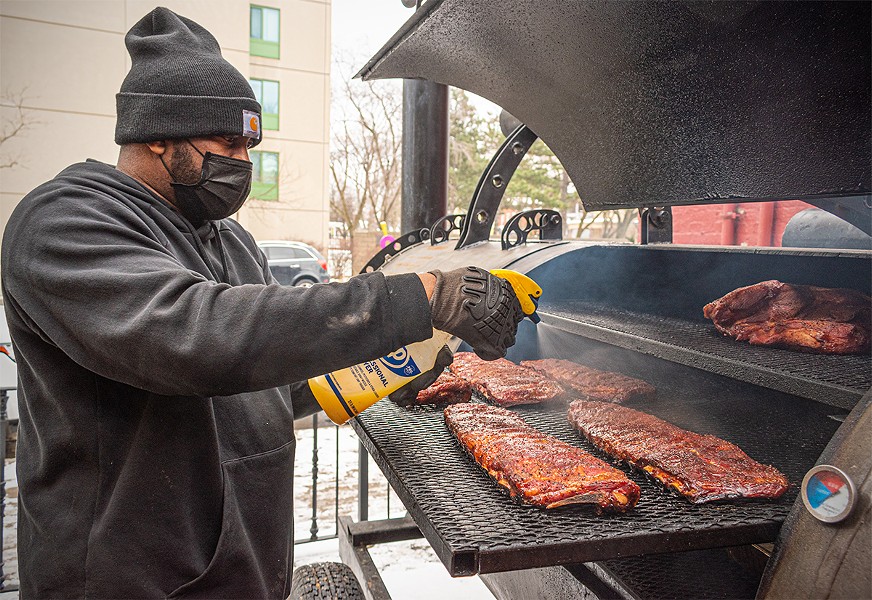 PHOTO BY JACOB WALSH Terrell McLean, the co-owner and chef at Bubby's BBQ, sprays down racks of ribs on his giant smoker, "Goliath."
There’s a hulking new fixture in the South Wedge that you’ll smell before you see, whose aroma of wood fire and seasoned, slow-cooking meats will have barbecue lovers floating Looney Tunes-style to its source in a courtyard near the corner of South and Alexander.

That would be “Goliath,” an imposing, custom-built smoker whose 500-gallon drum and charcoal black smokestack is the star attraction of Bubby’s BBQ, which opened in December in the storefront that had been John’s Tex Mex.

Bubby’s is a venture of co-owner and chef Terrell McLean, who moved to Rochester from Queens in 2017 with his wife Leslie in search of a more laid-back lifestyle and to be closer to family in western New York.

“If it wasn’t for Rochester, I wouldn’t have this,” McLean said as he sprayed down and flipped a rack of ribs smoking on “Goliath.” “You know what I’m saying? This is my home right now.”

The bright and cheerful space has a limited weekly menu at the moment, due to the pandemic affecting some availability of supplies, and indoor seating was not available during my visits. But a full menu drawn up on a chalkboard-painted wall teases what is to come when the health crisis winds down. In the meantime, Bubby’s is open for take-out, and McLean said guests will be able to order online by February.

I’ve said it before, and I stand by it: I don’t trust a barbecue joint unless it has a whiteboard or chalkboard menu with at least two items crossed out — a casual indication that the food is so good you’ve got to get there early. Bubby’s is that type of place.

I ordered bird-based meals on two visits to Bubby’s. My first was a half-chicken ($12), with a side of collard greens and smoked turkey ($6), and some cornbread ($1). Goliath’s slow cooking process gave the chicken a crispy outer layer that encased tender meat inside infused with a deep mustard and hickory flavor. The half-bird’s portions were such that I got two meals out of it, and the greens were tangy and salty with flecks of turkey. The cornbread is a small honey and cornmeal scented cube that is as sweet, light, and fluffy as a dessert cake. I bought two pieces; neither survived the walk to the car. 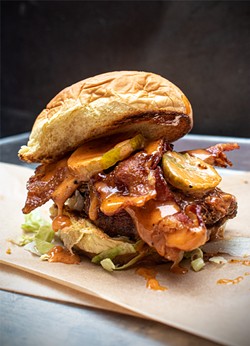 On my second trip, I got the Fly Bird ($12), the mac ‘n’ cheese ($6), and again, the cornbread, which I resolved to bring home this time. The Fly Bird sandwich is a fried chicken thigh topped with lettuce, pickles, a fried green tomato, and a mustardy Texas-style sauce with a bite. The mac ‘n’ cheese was made with huge elbow noodles held together with a thick, creamy cheese sauce that coats the taste buds. The cornbread made it through two traffic lights this time.

It is worth noting that these meals are a family affair. While McLean concocts all the sauces and meat recipes, the sides are Leslie’s creations.


Bubby’s was born of a family tradition of Sunday barbecues in the McLean household. McLean was born in Delaware and moved to New York City as a teenager. But he hails from a lineage of Texans and South Carolinians and he has blended those two barbecue styles into a signature of his own. McLean said he dreamed of opening a restaurant that offered food you’d find at a family cookout. In the fall of 2019, he founded his brand, dubbed “Bubby’s” in tribute to his late father’s nickname.

“I didn’t know until after he passed away that he always wanted a takeout spot,” McLean said. “So I decided when I started it up, I’d name it after him.”

He opened an Instagram account, made a logo, drew up a menu, and marketed mouthwatering meals through the app, available for pick-up each Sunday. The hustle evolved into pop-ups at local venues, which helped spread the word and boosted his business’s popularity. 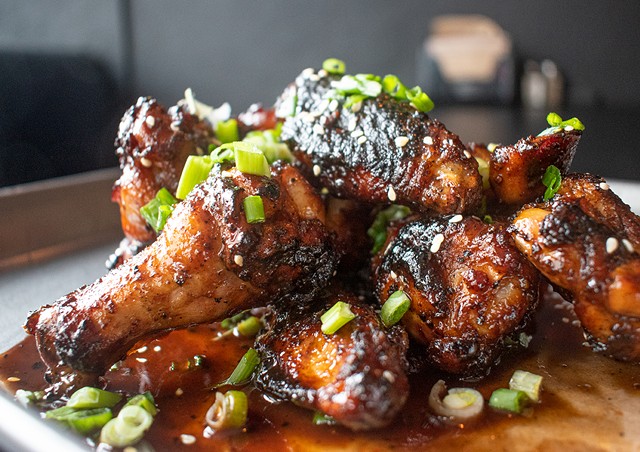 Getting laid off from his office job in March 2020 motivated McLean to make Bubby’s more than a part-time pursuit. He scheduled pop-ups at Triphammer, Embark Cider, Blue Toad, and The Penthouse on East and Main.

“I was like, all right, I’m going to start barbecuing, selling plates from the house,” McLean said as he tended to chicken wings on a nearby grill in the courtyard. “That’s what happened. And social media helped out.”

But it was a chance meeting during a pop-up at Viticulture Wine Bar that changed the trajectory of the business.

There, McLean met his partner and co-owner, Demetrius Ellison, a real estate developer and entrepreneur. Ellison envisioned Bubby’s a brick-and-mortar barbecue and homed in on the old Tex-Mex joint on South Avenue.

It was a perfect partnership. As McLean focused on the menu and engineered “Goliath,” Ellison set about sprucing up the interior with a kitchen renovation and a new paint job. Except for the windows, the space is barely recognizable from its former persona with its color scheme of barbecue red, charcoal black, and bone white. The reddish-brown walls have a way of whetting your appetite for the bouquet of brisket, ribs, pork, and chicken slow-cooking in McLean’s signature sauces.

As summer gave way to autumn, Bubby’s BBQ pop-ups slowed as the restaurateurs prepared to open. When they did on the first weekend of December, there was a line of customers out the door.

Chris Thompson is a freelance writer for CITY. Feedback on this story can be directed to Rebecca Rafferty, CITY's life editor, at becca@rochester-citynews.com.
With reporting from Jacob Walsh.