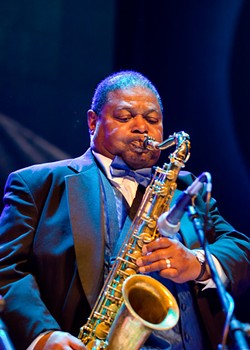 It was the late 1980s, and Greg Townson was playing guitar in one of the more successful acts on the Rochester scene at the time, The Essentials. A rock band with some horns, which lent it a sense of funk and R&B.

And if you’re going down that road, there’s James Brown right in front of you.

So naturally, Townson knew all about Pee Wee Ellis. Ellis had been the music director for Brown’s band. He even wrote some of the music. “Cold Sweat” and “Say It Loud (I’m Black and I’m Proud)” were two familiar James Brown songs that Ellis had helped write. And now, Townson heard, Ellis was living in Rochester.

So to create an excuse to meet Ellis, Townson used the old fake-reporter ploy (it’s worked for me for years). He got a hold of Ellis’ phone number and called, asking for an in-person interview.

“I went to his mom’s house, and he came down in his bathrobe and we sat in his kitchen,” says Townson, who was in his mid-20s at the time. “And looking back, it was really sweet and naïve on my part. I just wanted to meet the guy.”

“Would you like to sit in with our band?’” Townson recalls asking Ellis. “And he said, ‘Yes.’”

And so began a two- to three-year period of the acclaimed saxophonist and arranger “blowing the roof off of” — as Townson says several times — Rochester clubs such as Idols and Jazzberry’s. Clubs that are gone now, as is Ellis. He had been living in England for the last three decades when he died Sept. 23 at age 80 from a heart condition.

Ellis was inducted into the Rochester Music Hall of Fame in 2016. But his association with Rochester was born out of tragedy. He was just a kid, living with his family in Lubbock, Texas, when his stepfather was stabbed to death in a dance hall. Ezell Ellis was Black, his dance partner was white. Integration didn’t go over well in 1950s America.

So Ellis’ mother moved him and his two sisters to Rochester to live with his aunt. Ellis’ saxophone followed him here as well. He split his time playing Corn Hill’s legendary Pythodd Club and flying to New York City for sax lessons with Sonny Rollins, whom he’d met in a chance encounter in a New York City instrument-repair shop.

Ellis began working with Brown in 1965, a relationship that lasted four years. He wrote and arranged for other musicians over the next decade. Then he began a long association with Van Morrison.

Brown and Morrison were notoriously difficult personalities to work with. But Ellis, Townson says, never spoke ill of either man. In fact, Ellis rarely had anything bad to say about anyone. He was an optimist. And yet, despite having worked with some of the biggest names in music, when Townson met him, here he was. Living in his mother’s house.

“He was really trying to figure out what to do with his career,” Townson says, “and he chose Rochester to come back and sort of use as a home base to figure things out for himself. So that says a lot about how he felt about Rochester.”

And then Townson, the fake reporter, had the nerve to ask Ellis if he wanted to play some gigs with The Essentials. A club band unknown beyond Rochester.

“And the great thing about it was, I picked him up and brought him to rehearsal,” Townson recalls. “Which was, you know, here’s a guy who’s used to rehearsing in a rehearsal hall, proper rehearsal halls. We’re rehearsing in the basement in a house on Priem Street. It’s like a flophouse, three or four of the band members are living there, you know, it was just a flophouse. And he walked in, no problem. He went down to the basement, next to the furnace and everything, you can’t stand up. And he just loved the band.”

Ellis said he wanted to introduce the guys to a new song he’d just written.

“After he showed us the song and we played it through once, he said, ‘Now, do you guys have any ideas for this?’” Townson says. “That just blew me away. Here is this guy asking us if we have ideas?”

“He didn’t come down there like, ‘I’m the boss, I know everything,’” Townson says of Ellis. “He treated us with respect. It was mutual, it was a two-way street.”

Townson was studying Ellis, listening to everything he could find. Like the 1980 Van Morrison album “Common One.” Townson slipped it into the cassette player while driving Ellis home from a rehearsal.

“I haven’t listened to this since we did it,” Ellis said.

“It was a 10-minute drive, maybe less, to his mother’s house,” Townson says. “I thought we would listen to one song. But we sat outside his mother’s house, we sat there in silence, listening to that record together. And it was a great moment.”

As it was when The Essentials hit the road, at least as far as Monroe Avenue, with Ellis.

“The first time we played with — backed up — Pee Wee, was at Jazzberry’s on Monroe Avenue,” Townson says. “And Pee Wee blew the roof off the place with the first song. Literally people were on their feet. We did a song called ‘The Pop Corn,’ which was a James Brown song that he wrote for James Brown. James Brown put his name on it, but it was Pee Wee’s creation.”

The Essentials didn’t need to ride Ellis’s coattails. It was Richard Kaza, the owner of the local club Idols, who had the idea of getting the band to back a rock icon, Bo Diddley. Which they did several times through the late 1980s and early ’90s.

“So when Bo Diddley came, Pee Wee asked me, ‘Can I sit in, can I sit in?’” Towson recalls. “And I said, ‘Well, I’ll ask him.’ And Bo was not into the idea at all. He didn’t want anyone upstaging him. Now, Pee Wee wasn’t that kind of a guy, he wouldn’t be that way. But Bo didn’t know that. And I didn’t know Bo, I was just working with him for the first time. But I had to ask, because Pee Wee had been so great to us. And finally Bo did relent, and he invited him up onstage for two songs.

“That was Bo Diddley and Pee Wee Ellis on the same stage in front of a sold-out show in Rochester,” Townson says with a laugh. “You talk about a great night in Rochester.”

There were many gigs at Idols. The Essentials opened for the eclectic NRBQ, which has been labeled The Greatest Bar Band of All Time. “We wanted to be NRBQ,” Townson says.

But on this night, The Essentials had Ellis. “That was the secret weapon that we had,” says Townson.

Then The Essentials left the stage. “There was NRBQ standing there,” Townson says. “There’s this awkward moment of, you know, they’re our heroes. And then Pee Wee and his lady friend came down right after us, just following us down. And in the silence of this awkward moment, she said, ‘And the walls came tumblin' down!’ Cause we had just blown the roof off the place.”

With Ellis, more walls would fall. “He was totally open to it, and he just had a great time at those shows,” Townson says. “He loved the band and he loved connecting with the Rochester community through us. It was a way of putting himself out there locally, and it was a new audience for him.”

Townson hadn’t been in contact with Ellis for a few years, and was out of town when his old mentor was inducted into the Rochester Music Hall of Fame. By then, The Essentials were done. Townson had moved on to a great garage-rock trio, The Hi-Risers. He was releasing solo records. He joined the masked surf-rockers Los Straitjackets, who will be on a tour of the southern United States with Nick Lowe next month. “All the COVID hotspots,” Townson says warily.

As for Ellis, he had gone on to hook up with former James Brown horn players Fred Wesley and Maceo Parker to become The JB Horns. And there was a glorious, one-session burst of collaboration in 1988. Wesley and Ellis were joined in Rochester by Hank Ballard, Bootsy Collins, Vicki Anderson, Clyde Stubblefield, Bill Doggett and the guitarist Alphonso “Country” Kellum — another Rochesterian who contributed to Brown’s legacy — to record a funk and soul album as the King All Stars. Townson says Ellis told him Bobby Byrd, another former member of Brown’s band, was nervously asking, “‘Now, James isn’t here, is he?’ Because he thought he was getting tricked into doing something with James.”

The Essentials were essentially a white rock band. The JB Horns were a Black funk and R&B band. “Pee Wee had his feet in both worlds,” Townson says.

He recalls an otherworldly show at the old BK Lounge on W. Main Street. Ben Keaton’s place. The Essentials were opening for The JB Horns. It had been Ellis’s birthday, but it was way past midnight now. Twenty minutes after two in the morning, and Keaton was ready to close BK’s Lounge for the night. The band was still playing, so Keaton turned on the lights.

“And they wouldn’t stop,” Townson says. “And this is something I will remember for the rest of my life. I watched Ben, who was this big guy, I watched him go over and unplug the organ that Larry Goldings was playing, to get them to stop. And
Larry Goldings, all of a sudden — I saw him — like he was playing and all of a sudden he realized there was no sound coming out. What’s going on? And he looked over and he saw that the organ was unplugged. He got off the stage and went back and plugged it in and he went back onstage. They never stopped.

“And Ben just threw up his hands, and said, ‘That’s it, there’s nothing to stop these guys,’” Towson says. “Everyone was on their feet. They were on fire that night; that was the best show I’ve ever seen in my life. Talk about great music in Rochester. That was all happening in Rochester. That’s what Pee Wee brought to this city. Those years that he was here, he just raised the musical quality-of-life here, tenfold.”