June 24, 2020
"Miss Juneteenth, " directed by Channing Godfrey Peoples, is one of the current virtual offerings at The Little Theatre, part of the Black Cinema Series. It's about a single mom, Turquoise Jones, a former Miss Juneteenth winner, preparing her rebellious teenage daughter to follow in her footsteps and compete in the pageant. 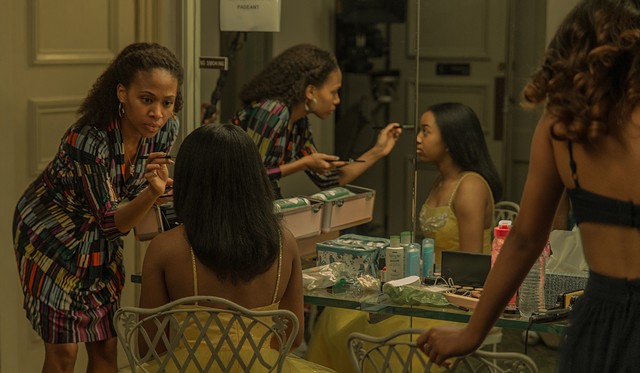 "The lesson that Miss Jones is trying to teach her daughter is: 'I know you're growing up, you've got your wants and desires and things you want to do, but let's not forget the past, and let me see if I can impart some wisdom to you,' " he says.

McCollough calls the film "a good story." But he also knows that being Black in America isn't a good story. It hasn't been, for four centuries.

Yet America, attention-deficit America — where issues perpetually ignite outrage before fading away — for once seems to be listening. Parts of America are listening, anyway. Black Lives Matter is on the streets every day. COVID-19 and George Floyd now share our attention.

McCollough has a long list of business-card-filling titles. Teacher. Film producer and videographer. Television and radio work, including as Rochester's first Black TV meteorologist. And author, with three young-adult books, soon to be published, on the Rochester activists David Anderson, Constance Mitchell and Walter Cooper.

McCollough is also the president of the Rochester Association of Black Journalists, which is co-producing the Black Cinema Series with The Little. Friday's 7 p.m. virtual showing of "Miss Juneteenth" will be followed by a virtual discussion of the film on The Little's Facebook page.

He's probably right, despite the fact that Juneteenth, which was celebrated last week, became newsy in its own right. June 19 is recognized in some form by most of the states in this country as the approximate date that slaves in Texas were told they were free, almost  two and a half years after Abraham Lincoln signed the Emancipation Proclamation. Last week, New York Governor Andrew Cuomo said he intended to introduce legislation declaring it a state holiday.

Geva Theatre Center sees what's happening. Its season ended early because of the coronavirus pandemic. A new season has been announced, but if it happens is far from certain. Only change now seems certain.

Artistic Director Mark Cuddy speaks of maintaining solidarity with the protests, "And how does that affect our programming? Making sure we're not being complicit in promoting white gaze and white stories, without even knowing it, without thinking and examining," he says. "So we want to make sure we're also taking the appropriate actions in our anti-racism work."

This is the summer where historical legacy is being challenged. Monuments to Confederate leaders are coming down, sometimes by order of the towns and cities that long ignored a treasonous stone soldier standing in the town square. Sometimes they're coming down at the hands of citizens.

Slave owners who are celebrated in our public spaces are teetering. A statue of Nathaniel Rochester, founder of this city, and a slave owner, was defaced last week. Their role is not celebration, but history. Their wing in a museum is a complicated and dark place.

Films such as "Miss Juneteenth," and art in general, tackle the issue of race in America. Writers such as James Baldwin, poet Amiri Baraka and the playwright Lorraine Hansberry did as well. The racism is sometimes brazen. And it is sometimes systemic, moving almost unnoticed among us.

"Art flourishes when we have discourse in society," McCollough says. "An example of that is in the 1960s. When we were — African-Americans, Black people — fighting for civil rights,  the arts flourished. You had a cropping up of just these brilliant writers. Baldwin was one of them, Baraka was another one. Lorraine Hansberry."

Human beings, he says, fighting for dignity. It's always a fight. We see it on walls, colorful graphics in urban areas.

"I think the arts flourish, go hand-in-hand, with discourse in society. And they're good, because they allow people to express themselves and express ideas. Expressing ideas is essential for any free society."

He cites the Rochester artist Shawn Dunwoody, who led the effort to paint "BLACK LIVES MATTER" on the street alongside Dr. Martin Luther King, Jr. Memorial Park at Manhattan Square. Just as has happened in other cities. Dunwoody added a space where citizens can add their own sentiments.


McCollough calls it "beautiful," and "a peaceful demonstration."

"I would say that piece he did at Manhattan Square Park is really an expression of what's happening now," he says.

This is the year of COVID-19. But it's also the summer of learning. McCollough sees the writing on the walls, and on the streets, as educating people about "the evils of the world."

"I think without education, without exposing young people to new and different things, getting out of the neighborhood, without doing things like that, I don't think you're going to move anywhere," he says. "You're not going to be self-sufficient. You've gotta be exposed, you can't be a victim."