Rochester Fringe Festival shows reach for the light, and the heavy

This is how the sausage of journalism is made: Reporters from WXXI and CITY Magazine met last week to decide who is covering which drag queen at the KeyBank Rochester Fringe Festival. We’re all in search of the year’s theme before we’ve seen whether Matt Morgan drops his pants to show off his tighty whities.

“I know that the producer of the Philadelphia Fringe, he says every year they — the press and the etcetera — say to him, ‘What’s the theme this year?’” she says. “And he says, ‘I’ll tell you when it’s all over.’ And it’s always like that for us too.”

Maybe. After the last 18 pandemic months we’ve been through, perhaps we don’t have to wait on making grand statements until the final moments of the 12-day Rochester Fringe, which begins next Tuesday, Sept. 14. As a card-carrying member of the etcetera, I can say with some certainty that this year’s theme is social issues.

Black Lives Matter. #MeToo. The environment. Sexual identity. Immigration. These are issues to be found throughout the 10th annual event’s 425 live and virtual performances. You’ll find the complete list at rochesterfringe.com.

Some aspects of Rochester Fringe will be familiar from past years, following a 2020 festival that was presented entirely online. Silent Disco. Pedestrian Drive-In. Gospel Sunday. Garth Fagan Dance. The intimate comedy of the women of Bushwhacked at the intersection of Gibbs and E. Main Street, dubbed “One Fringe Place” for the festival.

Yet other events will show signs of what the nation, and the world, have been through. Masks will be required for all indoor events, with proof of vaccination needed for audience members 12 and over. As some former East End District venues are not yet available, the shows are spread farther afield. Out to Brighton and the new Canalside stage at the JCC. “What a stroke of genius, and everyone has been clamoring for that stage all summer,” Fee says of the outdoor venue.

The glittering Spiegeltent, anchoring One Fringe Place, could not make it out of Belgium because of COVID-19 travel restrictions. In its place will be an Italian circus tent, with sides that open up, allowing in fresh air.

And there will be only one big, free event on the grassy lot off of E. Main Street, previously known as Parcel 5, but now dubbed with an oh-so-hip new name inadvertently borrowed from a Fox cable channel talk show, “The Five.” Rochester’s clever rock stars, Joywave, have curated and are headlining a special concert on Parcel 5 — duh, The Five — for the final day of Rochester Fringe, Sept. 25. Joywave will be joined by a couple of national acts, and some of the best that the city has to offer in the dance-floor rock of KOPPS, pop-harpist Mikaela Davis and ukulele charmer Cammy Enaharo.

To that end, Rochester Fringe allows most of the 23 individual venues to book their own acts, rather than filtering the process through a small artistic committee that may harbor its own narrow prejudices. The kids can enjoy pumpkin painting at One Fringe Place before their parents excuse themselves to head to the Italian circus tent for the return of Matt Morgan and the boozy celebration that is Cirque du Fringe’s post-wedding comedy, “Afterparty.” 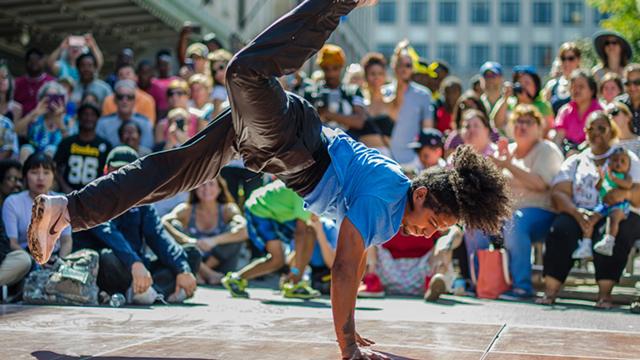 “Street Beat,” the Sept. 18 dance battle at Martin Luther King Jr., Park, is a prime example of introducing the unfamiliar to a new audience.

“The first year that we did that,” Fee says, “I have to tell you, there were some families who were there who almost looked scared. They were white families who obviously had never attended any sort of hip-hop dancing or urban dancing competition before. But they were there.

“By the end, there was such community spirit in that room, it was absolutely incredible. Because the people who had never attended before, they got into it, they understood, and we’ve seen those people return year after year, because now they’re familiar.

Such obscure shows include BIODANCE’s “Elemental Forces,” with its environmental message. Or “The Fixer,” an amusing yet poignant story of a mother whose daughter was born with cerebral palsy. Or the interactive mix of “A Love Letter to Brian Lesley and Michelle” — the names point to BLM, or Black Lives Matter.

“Of course Black Lives Matter has been such a prominent force, and why wouldn’t it be?” Fee says. “I think that it would be almost ridiculous if many of the shows did not address that.

“And also some of the Me Too movement has been addressed. You look at a show like ‘Generic Male’ by PUSH, and that is addressing some of the issues in the #MeToo movement, and where do men stand at this point?”

“I am seeing overall, definitely, an awareness, a reaction to some of the social progress and social questions that have gone on, that recently have been raised,” Fee says. “But I’m also seeing a lot of joy here, and a happiness to being able to gather again.”

With the possible exception of unicorns at the children's shows, the performances cater to all things socially aware these days. This will be the Woke Fringe.

She suggests the Rochester Fringe’s mission is to, in part, “provide a platform for artists, so we are not fussy about censorship. We are not telling artists what they can or cannot present.”

When Fee says Rochester Fringe offers “something for everyone,” she’s not just talking about music ranging from a Sinatra impersonator to a deep dive into Queen and Freddie Mercury. She’s also talking about shows such as “Geographies of Power” at Java’s Cafe, spoken-word poetry about being Black, queer, female, and awake. And the virtual performance of “I Could Not Speak It,” the story of a woman sexually abused by her father.

“We really didn’t find that our venues tend to shy away from taking on those shows,” Fee says.

And it’s safe to say that the overall tone of the festival runs contrary to a conservative point of view.

“I think that the arts in general,” Fee says, “tends to have a progressive slant to it.”

Although he has been dead for four centuries, Shakespeare is a consistent presence at Rochester Fringe. But “William Shakespeare’s Sharknado,” a fusion of classic Bard and pulp-film cheese, is not your high-school literature class Shakespeare. Fee thinks it’s a worthwhile artistic experiment to “re-visit Shakespeare and bring it to life.”

Shakespeare historically, of course, leads us to the matter of men performing in drag.

As Fee speaks, tears run down the greasepaint cheeks of the world’s clowns. And fall on ridiculously oversized shoes that no one else would dare wear. Rejection can be painful.

“You see also, like, national funding and state funding, will go to theater, dance, music,” Fee says. “But it won’t go to circus. Same thing for drag.

“It’s not really fair to rank our art forms against each other, I don’t think.”