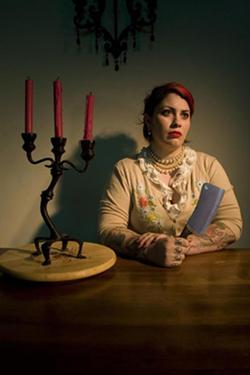 It’s not that Rachel McKibbens has an issue with a cappella.

But “unlike other venues,” she says, “it would have been a risk for us to book the YellowJackets.”

As the 12-day KeyBank Rochester Fringe Festival unfolds, the University of Rochester vocal group is the last thing that the usual unusual clientele of The Spirit Room would expect to find there. Not in the midst of all those skulls and voodoo tchotchkes and drag queens.

“It’s the most Fringe,” McKibbens says of the lineup curated by the intimate State Street cocktail bar. She’s a co-owner of the quirky space, along with her partner, the writer Jacob Rakovan.

“Vulnerable and provocative,” she adds, “and voices belonging to those who aren’t ordinarily, you know, given access to platforms.”

The venue’s shows take risks. The direction is sometimes dark, and subject matter can range from tarot cards and ghosts to tales of mental health, heroin, and prostitution.

Sometimes the direction leads to the light, as with the healing sounds of the Cobbs Hill Consort and the confessional soul-pop of Naked.

And where each show takes the audience is important.

“We just move forward,” McKibbens says. “Because this pandemic, if it’s taught us nothing else, we really need to be in community with each other in ways that maybe we haven’t been so bold to do in the past. Hang out with folks that aren’t like you, and have conversations with people who maybe don’t share the same ideologies, but you find common ground in your humanity.”

McKibbens has not backed off from baring her own humanity. The poet’s show, “8 Chamber Hunger Orchestra,” playing the two Saturday nights of Rochester Fringe, is a collaborative combining verse, drag performance, and soul-baring.

McKibbens uses her art as a platform. And so “8 Chamber Hunger Orchestra” starts from the womb and unfolds as a personal memoir of torrential confession and confrontation. Active in social issues, she describes herself as a pro-choice organizer and part of a movement geared toward the “liberation of fellow queers.”

McKibbens speaks of “authoritative white men in my life that have always sort of hung around the back end of my brain as I move through the world.” A mother of five, she calls her postpartum depression a “beast untreated,” a condition that “can destroy generations of families.” McKibbens lives in a world of chronic depression: “I was born sad,” she says.

Growing up in Santa Ana, California, McKibbens says she witnessed “the Mexican immigrant, Chicano gang culture.” Two of her "chronically-incarcerated" uncles were in rival gangs, although — and this stands as good news — there hasn’t been a stabbing at a family reunion since 1998. “I come from a brutal, violent upbringing," she says. “My grandparents sold drugs and were sex traffickers.”

After school, she saw other kids being welcomed by their parents with open arms. It was a ritual McKibbens was denied. She had a house key tied around her neck with a piece of yarn, so she could let herself into the empty house when she got home.

“I was the saddest person in high school,” McKibbens says. “But I was also voted class clown.”

“Clowns are the saddest people on earth.”

Poverty, incarceration, and bigotry, she says, are the roads to such ruin. So much of this is passed on from one generation to the next. “The inheritances,” McKibbens says, “that leave us bankrupt.”

“I live with bipolar disorder.” Post-traumatic stress disorder. Attention deficit hyperactivity disorder. “PTSD, ADHD,” she says. “I have half the alphabet.”

Schizophrenia is present as well. McKibbens’ first child is living with the illness, as is her mother. McKibbens has not been in contact with her for more than 35 years, yet remains an often-unacknowledged presence in McKibbens’ writing: “I just let her sit still as the villain in the corner of every poem.”

“She has stalked me since I was in kindergarten,” McKibbens says.

For McKibbens, the challenges of mental health lurk in what she describes as “the depths of the ocean.” Her mother is as omnipresent a threat as Moby Dick was to Melville.

“She will always be sort of my white whale,” McKibbens says. “My mother will be in all of my writing all of the time. And so how do I kill her, in a way that allows me to live, right, without the actual act of murder? How do you as a writer do these things and commit these acts for yourself?

“I have worked really hard to not mirror the ways in which my mother has not mothered me. And how my father, who was an absolutely violent, alcoholic, self-hating Mexican man…

“I have done everything in my power to prevent myself from pulling from those blueprints. Because while growing up, my blueprint was a black eye.”

Why does McKibbens choose to share her stories of pain in “8 Chamber Hunger Orchestra?” Why summon Moby Dick from the depths?

“Recognition allows for buoyancy,” she says. “And it allows for you to name a thing. And it is no longer this monster that has too many arms for you to fend off.”

Art must be larger than the challenge it confronts.

“And not, again, mimic the monsters that try to shape us into sharp objects. I’m not a sharp object. I’m a big, soft, you know…” McKibbens breaks into a laugh and finishes the thought. “Mexican witch who happens to know how to tell a proper joke.”

She escapes the “undercurrent of tragedy,” as she calls it, through the words she shares.

“What I care about is that my art is reflective of the times, it is reflective of my community, and the needs of my people, my kin,” she says. “Those who live with mental illness, the orphans, the misfits, the witches, the bitches, the outcasts. All of them, those are my people. That’s the only people I need to connect with.

“I think all of us as artists, at some time in the beginning of our careers, we really want to be seen and heard by everyone. And then you, we, get to this point — which is a great point — where you get pushed off the cliff and you land in the mosh pit. And the only people holding you up are your people. The people who would actually buy the ticket, be willing to take a Doc Martin heel to the nose, listen to the music, and spin you around.

“Those are my people.”

This article has been corrected to fix an error relating to McKibbens's upbringing.