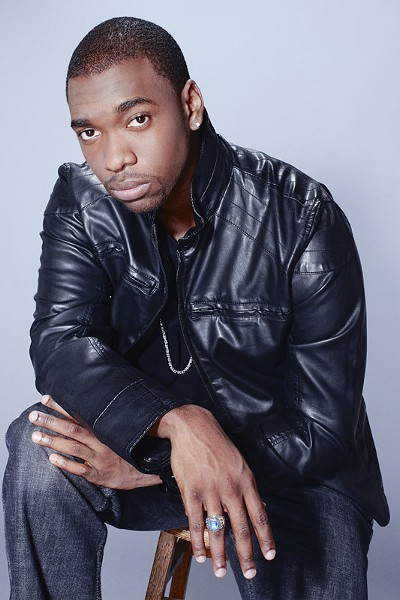 The man at the microphone is unmistakable, speaking in clearly enunciated words with a clipped, precise delivery. President Obama is cool and collected no matter what crisis the world — or congress — throws his way. And if not for the laughs and his closing words, "Live from New York, it's Saturday Night!" you could almost believe it's him.

But the man at the microphone is 26-year-old wunderkind Jay Pharoah, and there are a lot more people than Barack Obama residing inside the rising comedy sensation. Ready to spring out at the slightest provocation are Denzel Washington, Will Smith, Eddie Murphy, Chris Rock, Nicholas Cage, Bill Cosby, Kanye West, and dozens more.

When he headlines the Rochester Fringe Festival, Pharoah will do far more than impersonations. In addition to his SNL work, Pharoah has been doing cutting-edge stand-up comedy for a decade all over the country.

Born Jared Antonio Farrow in Chesapeake, Virginia, in 1987, Pharoah was honing his impressions when he was in single digits. By the time he was 15, he was already performing in clubs.

Tapped for SNL in 2010, Pharoah took over the role of impersonator-in-chief in 2012. In doing so he joined an exclusive club whose members include Dana Carvey (George H.W. Bush), Darrell Hammond (Bill Clinton), and Will Ferrell (George W. Bush),

Pharoah has become so well known for his dead-on impersonations that he often learns of major and minor news stories through fans. Recently, when Stephen A. Smith, an ESPN commentator and a Pharoah persona, made some unfortunate remarks about the role of women, Pharoah was flooded with tweets telling him he had to do something. Trouble is, he does impressions of so many people it's tough to keep up.

City spoke with Pharoah recently for a phone interview. The following is an edited version of that conversation.

CITY: When did you have your first inkling that you would be a comedian?

Jay Pharoah: When I was 6, I was watching "Aladdin" and I did Iago — the Gilbert Gottfried character. A friend said you're really good at this. I thought, if a 6-year-old girl is saying that in a complete sentence, maybe I should continue.

I've got a very heavy Christian base — my parents — so at the time I was doing jokes about the rapture.

Do you remember listening to any impressionists growing up?

I had no clue about impressionists when I was small. When I got older I found out that Eddie did it. I thought, "Wow, Eddie Murphy does impressions?" I always knew he was funny, I just didn't know he did voices. Then I started watching other ones. On David Letterman I saw Frank Caliendo and Reggie Reg — I thought he was great.

When you do some of your impressions, like Bill Cosby and Chris Rock, it's not just the voice; you physically almost become that person. How does that work?

You imagine a person's face while you're doing their voice and imagine them saying the things their saying. I shouldn't have told you that; I just gave out my secret, man.

Almost every great black comedian, starting with Richard Pryor, has at some point addressed racial problems in their act. White comedians don't bring that baggage, even though whites caused it.

I don't know if it's really baggage; it's more art. It's just observation because it's about the condition. You're forced to observe stuff and then just make jokes about it. What part of my act are you thinking of?

Your Golden Corral story where you're working in the kitchen and you throw a roll at an older black worker. He thinks your white friend did it.

Oh yeah, that actually happened. It's totally sporadic. It just falls into your lap and you think, "I can use that." In my head when I see something like that, I make it like a little pocket of my set.

Comedians can get away with a lot. You can use the n-word and do jokes about ethnic stereotypes. But recently, when Marlon Wayans tweeted a picture of himself rolling his eyes while Delta Goodrem danced in the background with the caption "Delta Goodrem can't dance" — as in "White people can't dance" — he got in trouble.

Nowadays, people want to be so politically correct. Thirty years ago, you had to start a rally or some bullshit. Now you can speak out against small things especially when you have outlets like Twitter, Instagram, and Facebook. With technology you can voice your opinion so quick.

Do you ever watch what you say?

Nah. There's a certain line I know not to cross, but at the same time, edgy is what makes names. By playing it safe you're not going to get there. You have to ride that line and figure out what you can say to push it but not go too far.

Where is that line?

When you talk about physically harming somebody or you would do something to somebody that's like a mortal wound. Most of the time it's not, but a few of my peers have said some things over the years that have gotten them into major trouble.

As a comedian you're supposed to be allowed to say what you need to say and be unapologetic. At the same time you have to be very careful because the world has become so sensitive and everybody has that outlet where they can speak out against you.

How does it feel to join the elite group of people who have been presidential impersonators on "Saturday Night Live"?

I'm in a prestige club and I'm the first black one. SNL is amazing. It's an institution. It's been around longer than me. SNL was on when I was swimming around and hadn't been shot out yet.

Have you met President Obama? Do you know how he feels about your impression?

I had to be very careful. I was doing the impression and he was standing right there. It's like you can't move. You've got to be careful how you move. It's kind of like you go out to a strip club, you can touch some but some you can't. So you have do a test smack before.

I've never had that experience but I'll take your word for it.

It wasn't the greatest one. You walk in and it smells like depression and regrets but at the same time ... you've got to go at least once. It's not a normal thing I do.

He said, [in Obama's voice], "I think that guy's very good. He sounds just like I do." But I heard this through another person because by the time he came up to find me I was taking my makeup off. I was dressed just like him — it was great.

I was checking with him the whole time while I'm doing the voice. Am I doing this okay? He looked at me and touched me and said, "You're doing it." I told the snipers: Back off snipers.

What's it like alone on the stage — just you having to fill a large venue with your personality? Is it empowering or is it scary?

It's a little bit of both because as a comedian you have the opportunity not only to influence people but to touch people. And any comedian should have some kind of message at the end to try to empower somebody so one day that person can change something.

History's made by people saying things and wanting to change something. I feel honored to be able to have that mouthpiece. It is scary though.

I read that you were born premature and that you had a twin brother who died at birth. Do you think about that at all? Has it had any impact on you?

I think about it from time to time. I don't know if the world could have handled two of us. Would one of us have been evil and one good? Was he the good one? Am I the evil one?

As it is you're about 50 different people already.

A hundred — I got over a hundred. So I guess we would be 200 people. We would fight over who could do who.

Is there anyone you've tried but you just can't do?

P. Diddy — I don't really mess with that guy. It's like I'm not supposed to do this one.

You've accomplished so much at the age of 26; what do you see in your future?

I want to be somebody who's known to have done it all. I've got music coming out, I've got movies coming out and more of those are in the pipeline. Just more SNL stuff, movies, music and whatever comes after that. Babies ... whatever.

You could follow in the footsteps of another SNL star, Al Franken, and become a senator. Then maybe you could really become president.