There are more than 380 shows at this year's Fringe Festival. Not sure where to start? City's staff gives you their thoughts on can't miss shows.

The best part about the Rochester Fringe Festival is how easy it makes it to discover the offbeat, unusual, and slightly weird acts that might slip past. And by the sound of it, the Rochester Laptop Orchestra is exactly the sort of thing I'd hope to see at a fringe festival. Students from the University of Rochester and Eastman School of Music will demonstrate this relatively new art form, which blends art and science by using computer technology to create completely unique musical compositions. I could not be more intrigued. (Thursday, September 18, 6 p.m.; Saturday, September 20, 2:30 p.m. The TheatreROCS Stage at Xerox Auditorium. $5. All ages)

Two separate shows at this year's festival set out to exploit the comedic potential and interactive nature of Twitter. In "Trending," performers from Unleashed! Improv will create impromptu musical comedy based on their audience's live suggestions. (Saturday, September 20, 7 p.m.; Friday, September 26, 7:30 p.m. The TheatreROCS Stage at Xerox Auditorium. $10. Appropriate for ages 13 and older)

Meanwhile, "140 Characters or Less: A Twitter Comedy Show" takes a slightly more scripted approach, as local comedian Dario Josef hosts a set of stand-up comedy centered around the social media network. Plus, there's something called a Tweet-Off, in which audiences get to judge which of the featured comedians' tweets are the most gut-busting. #hilarity. (Thursday, September 25, 6:30 p.m.; Saturday, September 27, 3 p.m. RAPA's East End Theatre. $10. Appropriate for ages 18 and older)

I missed the live radio show of "The 39 Steps" at last year's Fringe Festival, so I'm really looking forward to catching "Vintage Hitchcock: A Live Radio Play." Local theater company Screen Plays will perform this 1947 radio drama based on two early films by the Master of Suspense. It's a show that promises to transmit spine-tingling thrills and chills straight to my face. What could be better? (Sunday, September 21, 1 p.m. The Dryden Theatre. $10. Appropriate for ages 5 and older)

"God of Carnage" is one of those plays I've always wanted to see, but never had the opportunity to cross off my list, so naturally I'm excited to see what local performers can do with the dark comedy about the chaos that ensues when two sets of parents agree to a civilized meeting to discuss a recent schoolyard fight between their sons. (Sunday, September 21, 9 p.m. RAPA's East End Theatre. $15. Appropriate for ages 18 and older)

The description of "Puppeteers in Love" presents a simple concept: Four types of puppetry are used to tell the story of two people who fall in love, but that's all I need to read. I mean, romance is swell and all, but really, they had me at "puppets." (Wednesday, September 24, 8 p.m.; Thursday, September 25, 7 p.m. MuCCC. $10. Appropriate for ages 13 and older)

"Traveling with a Dancing Tiger" Enjoy storytelling through many musical folk traditions at "Traveling with a Dancing Tiger: An Evening with Howie Lester," which is described as a Gypsy campfire, Turkish coffee house, experimental theatre, high drama, and low comedy wrapped in one. Lester will perform Blues, Gypsy, Klezmer, Cajun, Irish, and Appalachian traditions, as well as stories from around the world. (Friday, September 19, 9 p.m. The Little Theatre 1. Free. All ages) 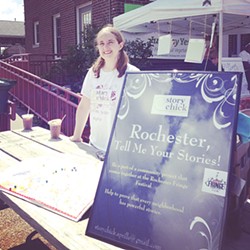 On Saturday, September 20, Aprille Byam, aka Storychick, will present "Rochester Stories 2014," to be held at RAPA again this year. The aim of this hour-long show, in which everyday people from all neighborhoods and all walks of life share engaging personal stories, is to strengthen our community by helping people make new connections. (Saturday, September 20, 12 p.m. RAPA's East End Theatre. $10. All ages)

Politics, the stock market, health insurance, and the education system run America, but treat people like numbers instead of beings with voices, say the creators of "WonderStreet," a puppet show created by choreographers Zhaklin Ivanova, Gina Krempasky, and Margaret Moreno. In this production, Wall Street becomes a wacky wonderland where the people are fighting for their right to be individuals. (Saturday, September 20, 8:30 p.m.; Saturday, September 27, 12:30 p.m. The TheatreROCS Stage at Xerox Auditorium. $7. Appropriate for ages 13 and older)

"A Page of Madness"

Don't miss your chance to see a rare screening of the Teinosuke Kinugasa classic silent film, "A Page of Madness," which was lost for 45 years, but rediscovered by the director in 1971. The film tells the story of a janitor who works at the asylum where his wife is committed, and his daughter, who arrives one day to tell her mother of her engagement. Acted by an avant-garde kabuki theater group, the drama employs pioneering visual devices which lead the audience back and forth between "irrational" and sane worlds. The film will be paired with live percussion accompaniment, as originally intended by Kinugasa, composed by NEXUS member Bill Cahn, who will lead a group of well-known local percussionists. (Sunday, September 21, 3 p.m. Kilbourn Hall. $11. All ages)

"Future Weather" tells the story of Lauduree, a 13-year-old loner who is passionate about nature and obsessed with ecological disaster, and Greta, Lauduree's grandmother, a fiery nurse jaded by alcohol and disappointment. When Lauduree's mother abruptly abandons her, the young teen decides to take survival into her own hands. Courtesy of the High Falls Film Festival. (Sunday, September 21, 7:30 p.m. Spiegelgarden. Free. Appropriate for ages 18 and older)

Vocal chanteuse Sage Melcher has belted and bopped from the underground smolder of NYC jazz clubs to oft-lamented palaces of excess like Studio 54, the Iridium, the Metropolitan Room, and the Del Ray in L.A. However, this time around, it's all about the pop original arrows in her quiver. (Thursday, September 18, 5 p.m.; Tuesday, September 23, 5 p.m. Java's Café. Free. All ages)

PerCepTION is a modern jazz quintet that views limits and parameters and the notes on the page as lines in the sand just begging to be crossed — all served up hot and fresh... some for the very first time. (Thursday, September 18, 6 p.m.; Tuesday, September 23, 6 p.m. Java's Café. Free. All ages)

The Younger Gang is more of a old-tyme music salvation than a straight-up hijack. Electric elements break down bluegrass walls, rebuilding them for those who want their picking not doing sepia tones and antiquated. It swirls; it swings; it rocks. (Friday, September 19, 5 p.m.; Manhattan Square Park. Free. All ages)

If you pray for danger in your music why not invite an intelligent computer to the affair and jam with it as it reads and interprets the human component. That's what brave human trumpeter Al Biles has done with a computer called GenJam. He and his electronic counterpart play around with the notes in bebop to swing to Latin pop. Someday computers will rule the earth, they might as well sing to us, too. (Friday, September 19, 5:30 p.m.; Sunday, September 21, 12 p.m.; Friday, September 26, 5:30 p.m. The Little Café. Free. All ages) 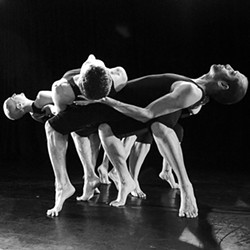 Another big name local company, PUSH Physical Theatre, will also perform at Fringe in what may be the troupe's only home performance this year; PUSH will be busy competing on a reality television show airing on major cable.  PUSH was founded by husband and wife team Darren and Heather Stevenson in 2000 with the intent to "push" the boundaries of theater. Their distinct mix of dance, mime and acrobatics combines humor, excitement, and insightful storytelling to delight audiences. Last year's Fringe performances sold out. (Saturday, September 20, 3 p.m. and 7 p.m.; Saturday, September 27, 3 p.m. and 7 p.m. Kilbourn Hall. $16. All ages)

A big part of Fringe is the thrill of discovering fresh talent, the satisfaction of hitting upon a show that grabs you — one you want to give a big shout out to. Last year, a work called "Transient Being," choreographed by Eran Hanlon and danced by Alaina Olivieri with visuals by Joseph Tarentelli, exemplified that state of joyful viewing for this reporter. Thrillingly, Hanlon is back in collaboration with Tarentelli to present "Germination." Directed by Hanlon and using Taeantelli's projected video "Torrit Oak," painting and dancing again intersect in this production. Here's hoping it's as good as last year's. (Saturday, September 2, 6 p.m. Gallery r. Free. All ages)

Another show promising to be way different is "Diaghilesque," a collection of Ballet Russe gems reimagined by NYC dance company KineticArchitecture! And choreographed by Faux Pas le Fae (this company obviously has a sharp sense of humor). The company bills itself as a combination of burlesque carnival and modern dance. Time Out NYC describes it as "A mixture of dance, gravity-defying gymnastics, yoga and S&M." Hmm. The show includes nudity and is intended for mature audiences only. Add sylphs, swans and fauns to the mix and exploration of feminism, trans issues, abuse, and primal sensuality and you've got something to contend with. Here's betting the costumes are fabulous, too. (Wednesday, September 24, 9 p.m.; Thursday, September 25, 9 p.m.; Friday, September 26, 9 p.m.; Saturday, September 27, 9 p.m. Geva Theatre Center Nextstage. $16. Appropriate for mature audiences)

Rochester theater's musical power couple, Janine Mercandetti and Carl Del Buono, team up again after their performances at the JCC last season of this very popular Jason Robert Brown two-hander. It ingeniously tells the story of a failed marriage from two points of view: his (told from beginning to end) and hers (told from end to beginning). Yes, it's been made into a movie, but you know this is going to be better. (Sunday, September 21, 7:30 p.m.; September 27, 9 p.m. The TheatreROCS Stage at Xerox Auditorium. $16. All ages)

The title may be tricky to type, but "SaMe SeX sHaKeSpEaRe" was a hit of the 2013 festival and it is back again, with boys playing female roles, women playing men's roles, and any other approach to performance that can get the Bard gender-bent. (Thursday, September 18, 9 p.m.; Friday, September 19, 6 p.m.; Friday, September 26, 10:30 p.m. The TheatreROCS Stage at Xerox Auditorium. $9) And for traditionalists who don't have a lot of time on their hands, "Shakespeare's Greatest Hits" will zip through two of his greatest albums, uh, plays — "Hamlet" and "Romeo and Juliet" – in one hour. (Monday, September 22, 7 p.m. MuCCC. $5. Appropriate for ages 13 and older)

"Rochester Playwrights II" and "You Are Where"

Two interesting presentations taken from Rochester's history: For "Rochester Playwrights II," The Geriactors, a troupe of "mature," and greatly experienced actors, who put on a charming show in 2013, return with more short plays by local writers, interspersed with old songs about Rochester. (Sunday, September 21, 1 p.m.; Wednesday, September 24, 7 p.m.; Saturday, September 27, 6 p.m. Writers & Books. $15. Appropriate for ages 13 and older) You may remember the old CBS show (radio and then TV), "You Are There," which took viewers back in history through re-inactments. In the case of "You Are Where," the "where" is "here" and the history is Rochester's. Don Bartolo produces and directs this unique view of Rochester history. (Friday, September 26, 7 p.m.; Saturday, September 27, 7 p.m. MuCCC. $10. All ages)

A revival of a well-regarded production written and acted by Spencer Christiano, who plays his own great-uncle, Lt. Col. Joseph Christiano, missing in action for 46 years after his plane was shot down over Laos on Christmas Eve, 1965. Proceeds from "M.I.A." will benefit Vietnam Veterans of America Chapter 20. (Friday, September 26, 8 p.m.; Saturday, September 27, 8 p.m. MuCCC. $12. Appropriate for ages 13 and older)