Why it's worth preserving 20th century architecture 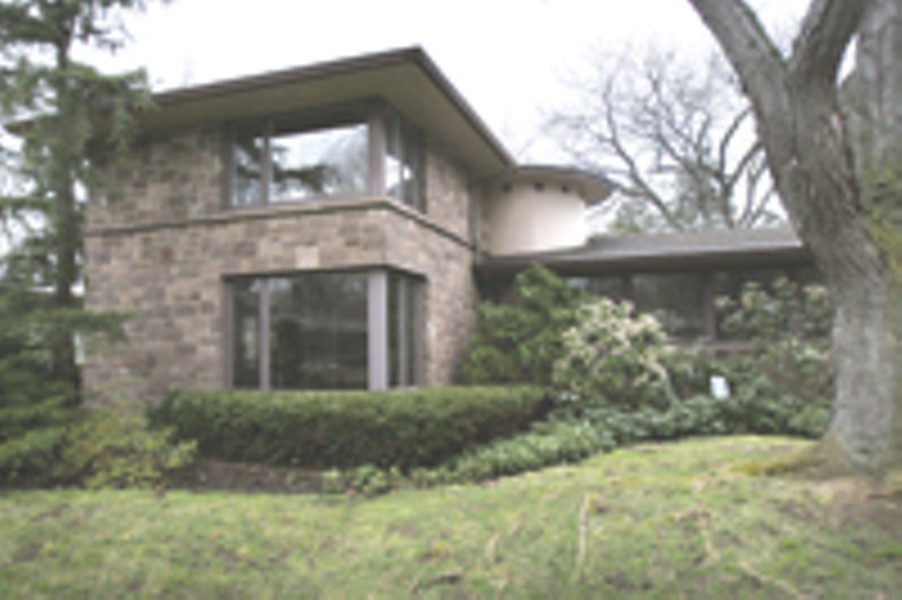 Gary Ventura The Braverman home on Thackery Road is the youngest building ever to be featured on the Landmark Society's historic house tour. Noted local architect Donald Hershey designed the 1954 structure, which is a stunning example of upscale ranch homes from the mid-20th century.

Kara Doughman Midtown Plaza has great significance to preservationists since it may be the first city center-based indoor mall in America.

Sid and Barbara Braverman were on their annual winter trip to Florida when they received a call about their house in Brighton. Nothing was wrong with the Thackery Road residence. To the contrary, something was very right: the Landmark Society wanted to add the property to its upcoming house and garden tour [see sidebar]. The offer was flattering, even exciting, says Barbara. But also quizzical: The Donald Hershey-designed house is undeniably stunning, from the distinctive medina sandstone exterior to the marble fireplace in the spacious, recessed living room. But it was built in 1954. And this is a historic house tour.

"I never thought we'd be this old," Sid jokes regarding his once-modern house's unexpected status.

In truth, he's not. But to preservationists the house is indeed considered historic. This may blow your mind, but the National Parks Service --- the body that helps dictate terms for preservationists nationwide --- defines a property as historic if it has existed for 50 years or more. Now that we're in the year 2006, that includes buildings put up as recently as 1956.

That doesn't mean that the ranch home owned by your Uncle Ted might someday end up reconstructed brick-by-brick in the Smithsonian. (Then again, who knows?) Not everything deserves saving. The philosophy behind preserving our recent architectural past is more complicated than that, and it's not without its share of controversy. But as the movement to preserve 20th century architecture gains momentum, it could inspire us to look at some buildings --- especially some Rochester structures we normally wouldn't think of as "historic" or "landmarks" --- in a whole new, or old, way.

Cynthia Howk, architectural research coordinator at the Landmark Society, says that discussions about preserving 20th century architecture "tend to raise some eyebrows." She occasionally starts lectures or asks classes what they consider historic. Almost always the answer is 100 years or more. When they find out it's half that, she says, the discussion gets pretty lively.

"It's a real leap to think of 50 years as historic," she says. "People can be more objective about looking at things that don't happen during their lifetime" But if you ask them about something created while they were alive, she says, they can easily dismiss it: "Well, I remember when that was built. Why would that possibly be interesting to history?"

There's a very good reason to be looking closely at the recent past, Howk argues: history marches on. What is typical today will eventually become rare and interesting. If we'd been in the 50-year-or-more mindset even 100 years ago, when styles like Queen Anne or Victorian were prevalent, consider the kinds of houses and buildings that might have been spared the wrecking ball or bulldozer. Now we look to those structures as charming reminders of days gone by: living, usable artifacts that are irreplaceable. In the 1950s and earlier, they were generally regarded as ugly, gaudy, and undeniably ordinary --- the same way we now view the ranch houses and split levels of the '40s and '50s.

Getting around that mindset is the trick of appreciating 20th century architecture, Howk says. It's not about what's pretty or ugly. It's about what a building or a neighborhood or even the materials used to create it says about the community at the time it was made. She gives the example of simple "starter homes" made for returning World War II G.I.'s that still populate the Culver Road area. They're not much to look at --- heck, there's not much to them at all. That's entirely the point: they were created as small, cheap houses for people to start a family in, and then move out of on the way to bigger and better things. Whether or not that happened with every house is irrelevant, but the fact that such structures exist speaks to a specific point in American history, Howk says.

Historians and preservationists have been getting wise to the importance of the recent past for a while now. In the mid-1990s, the National Park Service held a conference in Chicago called "Preserving the Recent Past"; in 2000 a second edition was held in Philadelphia. The point was to educate the experts on why 20th century architecture matters, says Erin Tobin Bearden, director of preservation services for the Historic Albany Foundation and New YorkState board member of the Recent Past Preservation Network. Tobin Bearden will speak on the topic of preserving modern buildings at the Landmark Society's conference this weekend.

"As time marches on, we start looking at post-war architecture and materials --- that's a natural," Bearden says of her profession. And there's plenty to look at, she says, including here in Rochester. Chief among local structures of interest is MidtownPlaza, built in the late 1950s, which Bearden identifies as the first urban indoor mall. "It has incredible significance for that reason," she says. Howk also notes Midtown's historical import, pointing out that it's a reminder of how major retailers --- McCurdy's and B. Foreman, in this case --- tried to lure shoppers back into city centers even as sprawl was pushing them out into the suburbs.

Shopping centers are some of Rochester's most historically significant buildings. In addition to Midtown, several outdoor shopping plazas hearken back to a time where the switch to car culture moved stores off of main streets and into islands of commerce surrounded by parking lots. Some of them haven't survived; Bearden mentions the former plaza on Mt. Hope Avenue, torn down to make way for a Wegmans, which itself has since been demolished. But others have grown and changed with the times while maintaining their original purpose, including Culver Ridge and NorthgatePlaza on Dewey Avenue.

Sometimes form rather than function catches historians' eyes, such as the former Columbia banks. Bearden says that in the mid-20th century businesses often employed architects to design a specific, iconic look for all their buildings. The Columbia banks are such an example, as the completely round, all-exterior glass branches were hard to miss. Columbia has gone out of business, but a few of the buildings remain, including one on Ridge Road that has been transformed into a pizza shop.

Preservationists advocate for that kind of creative reuse of a building with historical significance, Bearden says, so long as the structure maintains some semblance of its original purpose without losing the characteristics that made it special. Think of Culver Ridge becoming a movie theater as opposed to a department store, or an old Victorian house turned into law offices instead of a single-family home. And not everything made prior to the 1950s should be preserved. "In no circumstance can everything be saved," Bearden says. "But it's important to realize the best of each style."

The struggle now is making people aware of what modern buildings have to offer. "People still think of preservation as being about big, fancy mansions," Howk says. To try to broaden their definition, she often encourages people to do the following exercise: When you're sitting at a stop light, look at what's around you. What do you know about that gas station at the corner? When do you imagine those funny signs on the old laundromat were put up? Who do you think the kinds of houses in that neighborhood were originally built for?

"What is the story the area is telling you?" she asks. "What is it saying that's an important part of your community?"

That's part of why Howk is excited by the Braverman home being included on the upcoming historical house tour. It will be the first post-WWII home ever on the program, and she says it has lots to say about the period and community in which it was built. Stylistically, popular local architect Donald Hershey was clearly influenced by the trends of the 1950s, including the work of Frank Lloyd Wright. The ranch layout, with its lack of clear room dividers and plenty of windows, was all about bringing the outdoors in. And the incorporation of expensive textured materials like sandstone and marble sets it apart from tract houses or even more simple ranches; the original owners had enough money and time to hire an architect rather than just buy something already on the market.

Bearden is encouraged about the future of our recent past, and thinks that conferences like the Landmark Society's only make it brighter. "Bringing education and awareness to the general public, letting people know why we think these are special --- it's important to have these buildings appreciated by the public. Because preservation and regulation happens at a local level, and it's really important to make sure the local community understands."

History in the house

The Braverman house on Thackery Road is just one of the homes included in the Landmark Society of Western New York's annual House and Garden Tour, taking place Saturday and Sunday, June 3 and 4, 10 a.m. to 4 p.m. This year the tour focuses on Ambassador Drive and Sandringham in Brighton. Nine private homes in various styles, and several stunning gardens, will be open to ticket-holders, including the oldest remaining building in MonroeCounty (dating to 1792) and the first post-World War II house ever to be featured on the tour, the Braverman house (1954). Advance tickets cost $25 ($20 for Landmark members) and can be ordered by calling 546-7029 x. 10 or online at www.landmarksociety.org.