Nothing’s really changed with the Rochester outfit 1916. The music still has breakneck speed, it’s still Celtic-infused, and it’s still punk rock. The band is essentially the same, save for a new drummer and a few new barnacles on its hull. But it’s still 1916, with no convolutions and no punches pulled.

The quartet — Billy Herring on guitar and vocals, bassist Ryan Hurley, Jon Kane on mandolin, and drummer Anthony Presutti — is currently sequestered in Watchman Studios in Lockport, with studio impresario Doug White, to produce its fifth album, tentatively titled “Revolutions” and set to be released sometime in the late spring. 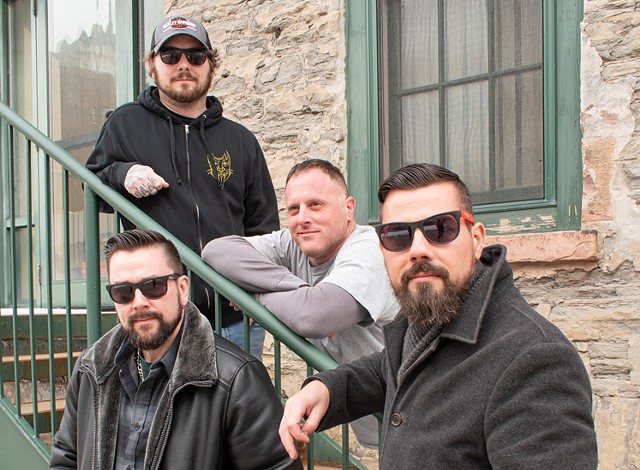 According to Herring, loud and fast takes time. “This is the longest we’ve worked on an album,” he says. “We wanted to take our time with this one because we’re evolving a bit. We’ve changed up our logo a little bit. We’re a little more punk rock and a little more guitar-heavy.”

But is putting more punk rock into the mix risking a change in sound, or oversimplifying the band’s trés cool hybrid of punk and Celtic music? Herring doesn’t think so.

“My punk rock may not be your punk rock,” he says. “For me, I like to add a lot of musical back-flips to beef the sound up. Punk rock is our base and we add little frills to make it 1916’s music.”

Some people may think it sounds completely different. In some cases, not so much. The band gave some of the new tracks to Flogging Molly guitarist Dennis Casey, so he could give them a spin and lend a critical ear. “He said, ‘They’re cool but they’re not that different,’” Herring recalls.

“When you play Irish punk and your songs don’t come out all super-Irish when you write them, you don’t want to force them to sound a certain way,” Herring says. “They should sound how they sound. If you can a certain sound and force it on people, they’ll see it as bullshit and you’ll get called on it.

“That’s why I just want to write honest rock ‘n’ roll and let the chips fall where they may. We wanted to get American fans into Irish music by playing rock ‘n’ rolI. People call it Celtic punk. That’s alright with me.”

The next thing on the 1916 agenda is the recording of a live album and DVD at Iron Smoke Distillery. The set will document the band’s musical chops and live show hijinks, in which Hurley can be seen treating his doghouse bass like a jungle gym and virtually the whole band runs around in the crowd as if their hair were on fire.