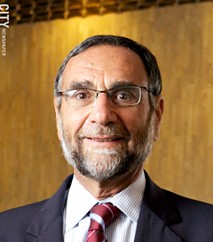 A member of a local church allegedly called Homeland Security after two male students, both Muslim and students at Nazareth College, attended a service and coffee hour at the church on Sunday, December 4, said Nazareth president Daan Braveman in a letter addressed to the "Campus Community."  A state police officer subsequently contacted the college to confirm that the students are enrolled, Braveman said.

The church in question is Browncroft Community Church on Browncroft Boulevard. The church's executive pastor, Sam Huey, said in a phone call this afternoon that he can't confirm Braveman's account. He said he wished that someone from Nazareth had contacted him before Braveman's letter went out.

The men, one African American and the other of Middle Eastern descent, visited the church as part of a sociology and religion course.

“They were shocked,” by the incident, says Julie Long, a spokesperson for the college.

Braveman's letter, which went out today, expresses his concern over the incident.

“I am very troubled and indeed angered that two of our students were singled out because of their religious beliefs,” he says. “This incident underscores, especially in the context of the larger environment, the importance of our work in promoting interfaith understanding and respect across lines of religious difference.”

This was the second time that the students visited the church and they said they were treated well both times.

A third, non-Muslim student also visited the church on December 4, but was not subjected to the same scrutiny.

The college’s interfaith course requires students to explore different religions and to learn more about how a diverse and pluralistic society functions, Long says.

Huey said that the incident doesn't reflect the mindset of the church.

I am writing to report on an incident that greatly disturbs me. This past Sunday, two of our Muslim students visited a local church as part of the Sociology of Religion course, which requires students to attend religious services that are not of their own tradition. This was the second time the students visited the church. Our students were very well behaved and appeared to be well received at the church. Nevertheless, a church member subsequently called Homeland Security to express concern about Muslim students from Nazareth. A State Police representative contacted the College to confirm that the two individuals are in fact students. After their student status was confirmed, the police dropped the matter. A third student, who is not Muslim, also visited that church earlier in the day but was not the subject of any such report.

I am very troubled and indeed angered that two of our students were singled out because of their religious beliefs. We intend to discuss this matter with representatives of the church. In the meantime, I want to stress that Nazareth is committed to supporting our students, and I have met with the two students to reassure them of that support. This incident underscores, especially in the context of the larger environment, the importance of our work in promoting interfaith understanding and respect across lines of religious difference.