October 26, 2016
Underwhelmed by the available options and, he says, determined to give Rochester a real choice, Fraser Smillie sat down at his computer to brainstorm a new concept for Parcel 5 at Midtown in downtown Rochester (see proposal below).

What he and Bud DeWolff, owner of DeWolff Partnership Architects, came up with is a statement building: a minimum 14-story glass-and-steel structure with a hotel, offices, restaurant, 3,000-seat performing arts center, housing, and other amenities.

An optics museum to showcase Rochester’s rich imaging history as well as its future in photonics is another possibility, says Smillie, who’s retired from Xerox, where he did marketing. 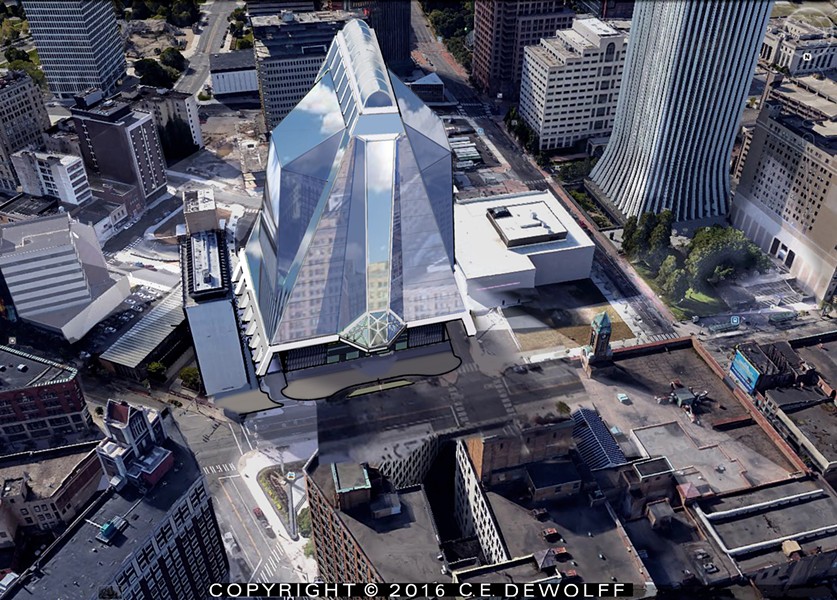 “Is it a final plan? No,” he says. “It’s just a plan to say that there are other options available. I think what we have done is sort of stir the pot a little bit by saying, ‘Here’s another chance to do something right.’”

Smillie puts the price tag at about $150 million and says that he potentially has a group of interested investors. But investors are reluctant to commit unless the City of Rochester shows it is taking the proposal seriously, he says.

That may be a sticking point; the deadline to submit proposals is long past. But in an unusual but not unprecedented move, City Council members say that they will interview the developers behind each Parcel 5 proposal. Council member Carolee Conklin said in today’s Democrat and Chronicle that she’s willing to include the Smillie-DeWolff proposal in that process.

The traditional route is for the mayor to choose a proposal and then send the recommendation to City Council for approval.

The other proposals are: a 14-story mixed-use tower; performing arts center; and green space for concerts and other public uses.

Smillie says those proposals are really not “choices.” The city will undoubtedly choose the mixed-use proposal, put forth by Gallina Development, he says. Now the city will have a real choice, he says.

“Here we have an opportunity do something really neat, and Bud came up with a great-looking building,” Smillie says.