Week ahead: Events for the week of Monday, October 17 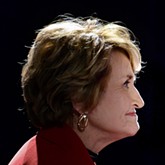 The League of Women Voters and WROC-TV will co-sponsor a debate between Representative Louise Slaughter and Gates Town Supervisor Mark Assini, candidates for the 25th U.S. Congressional District.

The debate will be held at 7 p.m. on Tuesday, October 18, at WROC studios, 201 Humboldt Street, and will be broadcast live.


Local clergy and Rochester ACTS will hold a press conference this week on “recent white-supremacist activities,” according to a press release. The event is at 1:15 p.m. on Tuesday, October 18, at Trinity Emmanuel Church, 9 Shelter Street.

The event is a response to the distribution of white-supremacist leaflets in Brighton and Pittsford. No group has taken responsibility for the leaflets, but they are linked to a website, whiterochester.org

The press conference will address the difference between prejudice and institutional racism, the press release says.


Author Steven Nemerovski will lead a discussion of third-party politics at Writers & Books at 3 p.m. on Saturday, October 22. His books will be on sale in the W&B bookstore, too. The event is free and open to the public.

Nemerovski is an adjunct professor with the School of International and Public Affairs at Columbia University.


Rochester Mayor Lovely Warren will meet constituents at one of her regular Coffee with the Mayor events this weekend. It’s from 8 a.m. to 10 a.m. at the LDR Char Pit, 4753 Lake Avenue. Given the location, Warren is sure to field questions on the Port of Rochester project, which has been in limbo since she pulled the plug on the project’s developer over financing. BY CHRISTINE CARRIE FIEN


The Environmental Climate Task Force of First Unitarian Church will show “Trashed: No Place for Waste,” a documentary film, at 7 p.m. on Tuesday, October 18.

The film by writer and director Candida Brady has won numerous awards for its examination of how garbage of every kind – from medical waste to plastic bottles – is accumulating at such a rapid pace in cities all over the world that we are running out of places to dump it.

The film is narrated by Jeremy Irons and will be shown at First Unitarian Church, 220 Winton Road South.


The City of Rochester’s Department of Neighborhood and Business Development will hold a public meeting to provide the results of the city’s Focused Investment Strategy for neighborhood revitalization.

The meeting will be held at 6 p.m. on Thursday, October 20. The first FIS program was implemented from 2009 to 2014 and targeted portions of the following neighborhoods: Marketview Heights, Beechwood, Dewey and Driving Park, and Jefferson Avenue.

The meeting will be held at the Rundel Library, Kate Gleason Auditorium, 115 South Avenue. BY TIM LOUIS MACALUSO