But he does have supporters in the Empire State. About 1,000 attended a rally for the GOP presidential contender at Monroe Community College tonight; Cruz doesn't have a Secret Service detail, so his staff capped attendance. Cruz's stop comes just days before the April 19 presidential primary. 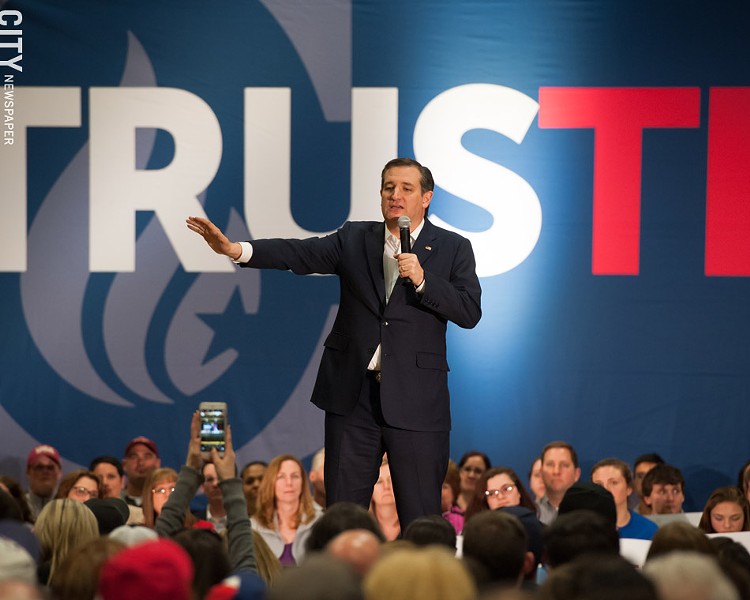 Before Cruz took the stage, the crowd watched a short video and jeered a clip of MSNBC host Rachel Maddow saying that Cruz is as likely to be the next president as Democratic Senator Elizabeth Warren. And they cheered a clip of Cruz's Iowa victory.

The first words out of Cruz's mouth were "God bless the great state of New York," and were probably an intentional contrast with his now infamous jab at "New York values," whatever those are. Then he told the audience that the election is about three major issues: jobs, freedom, and security. And for the next 30 minutes he didn't stray from those topics.

Your constitutional rights are under assault, he told the audience, and if the Democrats win the White House, then conservatives of faith are going to lose the Supreme Court for a generation. He'll repeal Obamacare and replace it with something "personal, portable, and affordable," he said. And he'll pass a flat tax, he said. (He also made two hard Ronald Reagan references, including an allusion to "morning in America.")

"After this election, every American will be able to fill out their taxes on a postcard," Cruz said. "And after we do that, we're going to abolish the IRS." The audience cheered, but it's an easy applause line as the IRS is roughly as popular as the Zika virus.

Huber said that he supports Cruz because Cruz supports Israel, opposes abortion, wants a strong military, and wants to secure the borders. Huber said that he's not anti-immigration, but that he opposes illegal immigration. His daughter, Rebecca Huber, was with him and she added that they share the same faith with Cruz, and that Cruz will be better able to handle ISIS.

"I really believe he's the only true conservative in the race," Phil Huber said.

Cruz spoke to all of the issues mentioned by the Hubers. On Israel, he drew a sharp contrast with Republican frontrunner Donald Trump; Cruz said that Trump has pledged neutrality when it comes to Israel and Palestine, while under him, "America will stand unapologetically with the nation of Israel," he said.

He also vowed to go after "radical Islamic terrorists."

And, of course, he encouraged the people in the room to vote on Tuesday.