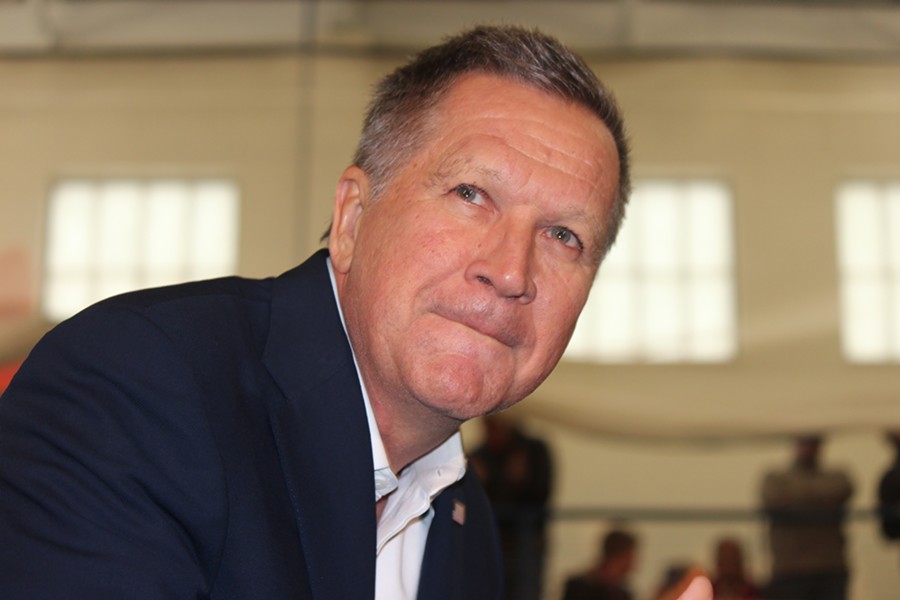 John Kasich's first stop was the room set aside for the overflow crowd, which ticked off some of the people in the main area, who incorrectly figured they were being made to wait so Kasich could charm local VIP's. The GOP presidential contender swept into that first room to a roll of applause and cheers, and he enthusiastically joined in.

"And they say I should quit," he said after the noise died down.

Kasich was in Greece Saturday morning for a town hall meeting at the community center.  For the first time in a dog's age, New York matters in the primaries and the 2016 presidential hopefuls are carpet bombing Rochester to court voters. Hillary Clinton spoke at MCC Friday night, Donald Trump is in Chili on Sunday, and word is that Bernie Sanders and Ted Cruz will be here next week. New York's primary election is April 19.

You'll be forgiven if you forgot that Kasich is still in the race. The Ohio governor with the difficult to pronounce last name — the only remaining GOP candidate whose surname isn't an action verb — is the de facto straight man in this otherwise all-clown Republican rodeo. The numbers say that Kasich doesn't have a prayer, but with talk of a contested convention and a rumored last-minute Paul Ryan candidacy, almost anything seems possible in this truly bizarre contest.

Kasich opened with a shot at GOP frontrunner Trump. He said it would be "just dead wrong" to ban Muslims from entering the country. "Immigrants matter," he said.

He then segued into his family biography, which seems to have been cosmically crafted to give John Kasich the best possible story to share out on the stump: a coal miner grandfather who died of black lung disease, an impromptu letter to President Richard Nixon which lead to college freshman John Kasich scoring 20 minutes alone in the White House with Nixon.

Kasich sounded like a populist in the early parts of his Greece speech. He talked about fighting waste in the military, caring for the mentally ill, and rehabilitating drug addicts. But then he returned to familiar Republican ground to talk about balancing the budget, easing taxes and regulations on small businesses, and "transferring power" from the federal government to the states when it comes to welfare, education, job training programs, and other areas.

The event took a turn onto "Sesame Street" when Kasich started telling people how special they are and that there's nobody quite like them. It's part of Kasich's routine that surprises former colleagues, according to media reports, who recall Kasich as a Jekyll and Hyde figure with an explosive temper.

Kasich took questions from the audience on college debt and finding a cure for Alzheimer's. It's interesting that in both cases, this Republican called for more programs and more funding.

Kasich was briefly shouted down near the end of his appearance by a small number of advocates for the disabled. He countered that as Ohio governor, the single biggest increase in his budget was for programs for the disabled community.