Hijab Day brings celebration and some controversy to School 58

February 05, 2016
Dozens of female students, faculty, and staff at School 58: World of Inquiry wrapped their heads in scarves today to show their support for Eman Muthana, a 10th grader. Muthana proposed allowing the school’s women to celebrate World Hijab Day, and she’s a bit overwhelmed by the response.


In a beautifully written letter to School 58 Principal Sheela Webster, Muthana proposed that all of the school’s female students be invited to wear a hijab just for the experience. Muthana, a Muslim originally from Yemen who learned English at the Rochester International Academy, said that many people simply don’t understand the way that girls like her dress.

“Sometimes my friends and I face lots of difficulties wearing it [hijab] because many people misunderstand the purpose of it,” Muthana wrote in her letter. She says people define her before they even know who she is or what she thinks. 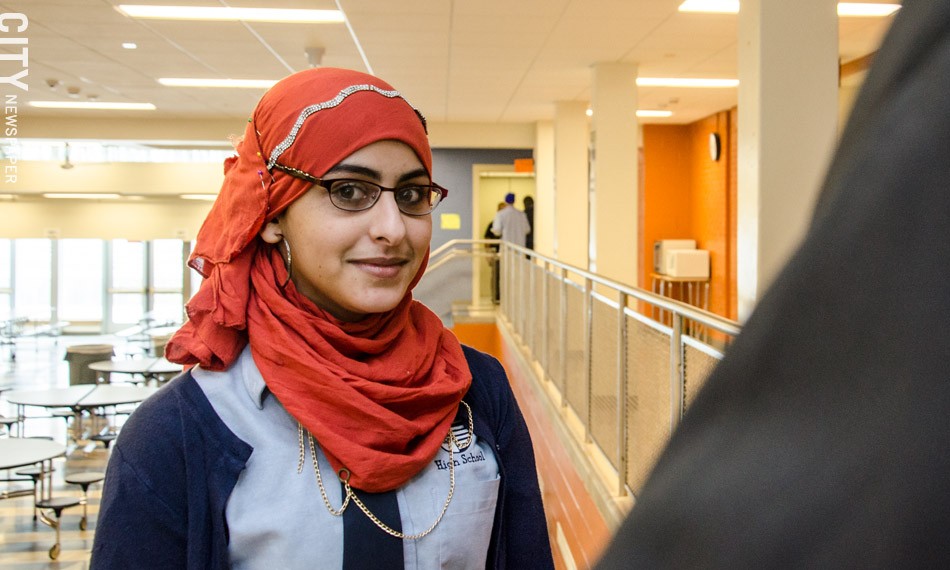 Even worse, she says, people tend to blame all Muslims for the September 11th terrorist attacks and some of the more recent violence.

Sharing a cultural experience could promote understanding, Muthana says. And most of her classmates and teachers agree.
Principal Webster says that Muthana’s proposal is in keeping with the school’s instructional model, which is based on experiential learning rather than just reading about a topic in a textbook.

Webster, who had never worn a hijab, says that diversity and inclusion are integrated into the curriculum at School 58, which is one of the district’s most popular schools.

“I think it was extremely courageous of Eman to make this proposal," Webster says. "And I’m so very proud of our school community."

Male students showed their support by wearing white carnations, says Gwendolyn Brisbon-Shepard, a school safety officer at School 58. Her son attends the school and she says that it became a topic of conversation at her kitchen table.

“We actually sat down and had a family discussion about the whole thing,” she says.

But not everyone has been supportive. School officials have received about two dozen calls complaining about the event, says district spokesperson Chip Partner. The complaints are largely based on misinformation, he says.

Participation in the event is strictly voluntary, he says, and has nothing to do with promoting Islam or converting children to Muslims.

Audra Schmitt, social studies director at the city school district, says that New York State has made a significant effort to bring cultural diversity and depth to the K-12 instruction.

“What’s really meaningful to me is to see a kid wearing a hijab as a non-issue, just like wearing a Yarmulke is a non-issue,” she says. “This helps to educate in a friendly, human way.”