December 01, 2015
(Editor's note: Lucky us — Nuvo, Indiana's alternative paper, has a correspondent in Paris for the climate change talks that are now under way. Lauren Kastner is on the Board of Directors of Earth Charter Indiana in 2015 and is a national youth leader with the Sierra Student Coalition.)

In Paris yesterday, heads of state arrived to open the United Nations Framework Convention on Climate Change (UNFCCC) 21st Conference of the Parties (COP21) with high-level statements to set the tone for the weeks ahead. Notably, President Obama addressed the conference with a message reaffirming the United States’ commitment to fair and equitable distribution of responsibility to mitigate emissions, help vulnerable populations adapt to the impacts of climate change, and strengthen partnerships with other countries.

But the buzz was about the shoes, smoke, and lingering sorrow that filled Parisian streets on the eve of the arrival of heads of state.

On Sunday, thousands of donated shoes were laid across Place de le Republique representing the 400,000 people who could not march after mass gatherings were banned by French authorities due to security concerns under a state of emergency. The drama of the scene intensified as the morning’s mist lifted and Parisiens walked amongst the shoes. Those who looked closely saw pairs donated by dignitaries and celebrities including Pope Francis, United Nations Secretary General Ban Ki-Moon, and actress Marion Cotillard. 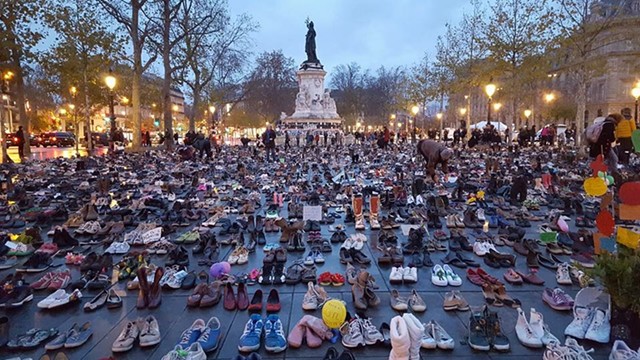 Hours later once the peaceful art installation was cleared from the square, local anti-government groups took over the square to protest the state of emergency. Hundreds of police in riot gear blockaded the streets and allowed the small group of protesters to march in the streets for about two hours before issuing dispersal warnings. The standoff escalated as protesters displaying signs and banners with messages of anarchy threw glass bottles at the riot police. Police responded with smoke bombs and teargas and cleared the square after arresting over 100 protesters.

In stark contrast, just a few blocks away from the site of the demonstrations lay a quiet and profound memorial of flowers, candles and messages. The memorial encircles the two still-shuttered cafes where, just two weeks ago, Islamic State gunmen opened fire on the street through coordinated attacks. Unlike the sometimes xenophobic rhetoric used in the days after the terror attacks, handwritten notes and letters left on the scene are messages of love and peace in dozens of languages and represent all faiths.

The tone in Paris is important because for many, the threat of climate change is just as real as violent terror attacks. Of equal importance are solutions to climate change that can help us dismantle the intensifying factors of terrorism such as water rights, land use, and scarce energy and natural resources. These issues are complex, sometimes contradictory and undoubtedly interconnected — what the world will decide to do about it will be seen over the next two weeks.