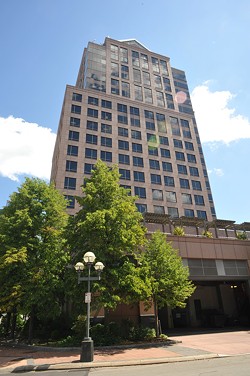 The Sibley Building isn't the only downtown site in the running for the headquarters of a new advanced photonics institute.

This morning, the Rochester Business Alliance sent out a statement from a group of local business leaders, urging SUNY Polytechnic Institute officials and other institute decision-makers to put the headquarters in Legacy Tower — formerly home to Bausch + Lomb.

"The former Bausch + Lomb building is a turnkey facility that would require almost no infrastructure upgrades, allowing the public’s investment to go toward its intended scientific and job-creation purposes," the statement says. "Placement of the headquarters at Legacy Tower will also benefit other downtown buildings as new companies and facilities come to Rochester looking for space."

But the request is at odds with efforts to locate the headquarters at the Sibley Building — idea that received preliminary backing from University of Rochester President Joel Seligman and Congress member Louise Slaughter, who was instrumental in bringing the photonics institute to the Rochester region. The request also creates an odd divide, since Seligman and Wegman co-chair the Finger Lakes Regional Economic Development Council.

But as disagreements go, there may not be much to this one. From the start, Seligman has said that the headquarters location was still under discussion. He's said that the Sibley site seems like a good fit, but he's been adamant only that the operation be located in downtown Rochester.

"Rochester, and I mean the City of Rochester, will be the headquarters for this effort," Seligman said on the day of the photonics institute announcement. "There are discussions going on. We're looking at places like the Sibley Building as the potential headquarters."