May 21, 2015
He’s back. Well, maybe. The Buffalo News’ Tiffany Lankes reported recently that former Rochester superintendent Jean-Claude Brizard is one of the finalists in the Buffalo school board’s search for a new superintendent.

Brizard left Rochester on not-so-pleasant terms to work for Chicago Mayor Rahm Emanuel — where he also reportedly had some difficulties. But he may be the right candidate for Buffalo’s schools. 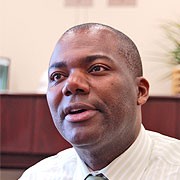 Brizard, as Lankes rightly points out, earned a reputation as an education reformer out of the Broad Institute — a supporter of charter schools, a stomach for closing failing schools, no friend of unions, and he has no serious issues with mayoral control of urban districts.

His experience in some of these areas may be precisely what some school officials and pols in Buffalo think they need right now.

Buffalo, like many poor urban school districts, has a number of failing schools. Brizard would presumably have to decide whether to find some to turn them around, or convert them to charters or close them.

It’s hard to tell how that would go for him. Some of the education reformers’ sales pitches have lost their luster in the last two years, and the push-back isn’t coming solely from teachers unions. Stiff resistance from parents to the Common Core curriculum and excessive testing are surely evidence of that.

And the more Governor Cuomo pushes his education agenda, which includes tougher teacher and principal evaluations, the more his popularity drops.

Brizard, however, knows what he's getting into; that school superintendents may start out thinking they have the support of politicians and community leaders when they have to make tough, unpopular decisions, only to find that support can shift with little advance notice.